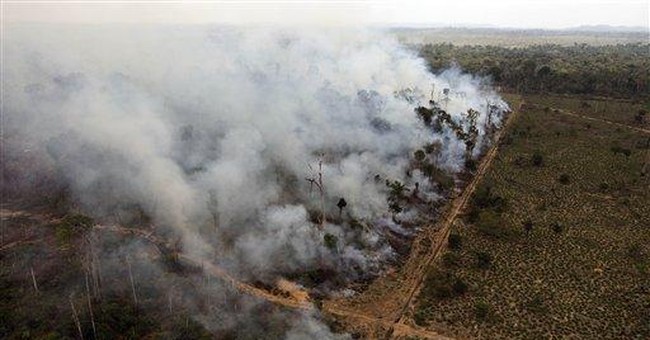 As Air Force One heads to Copenhagen for the climate summit Dec. 9, it will presumably not make a U-turn while flying over the Climate Research Unit (CRU) at University of East Anglia near Norwich, England. But perhaps it should.

The 61 megabytes of CRU e-mails and documents made public by a hacker cast serious doubt on the ballyhooed consensus on manmade global warming that the Copenhagen summit was called to address.

The CRU has been a major source of data on global temperatures, relied on by the Intergovernmental Panel on Climate Change. But the e-mails suggest that CRU scientists have been suppressing and misstating data and working to prevent the publication of conflicting views in peer-reviewed science periodicals. Some of the more pungent e-mails:

"I can't see either of these papers being in the next IPCC report. Kevin and I will keep them out somehow -- even if we have to redefine what the peer-review literature is!"

"Can you delete any e-mails you may have had with Keith re AR4?"

"I've just completed Mike's Nature trick of adding in the real temps to each series for the last 20 years (ie from 1981 onwards) and from 1961 for Keith's to hide the decline."

"The fact is that we can't account for the lack of warming at the moment and it is a travesty we can't."

"I'm getting hassled by a couple of people to release the CRU temperature station data. Don't any of you three tell anybody that the UK has a Freedom of Information Act!"

You get the idea. The most charitable plausible explanation I have seen comes from The Atlantic's Megan McArdle. "The CRU's main computer model may be, to put it bluntly, complete rubbish."

Australian geologist Ian Plimer, a global warming skeptic, is more blunt. The e-mails "show that data was massaged, numbers were fudged, diagrams were biased, there was destruction of data after freedom of information requests, and there was refusal to submit taxpayer-funded data for independent examination."

Global warming alarmist George Monbiot of the Guardian concedes that the e-mails "could scarcely be more damaging," adding, "I'm dismayed and deeply shaken by them." He has called for the resignation of the CRU director. All of which brings to mind the old computer geek's phrase: garbage in, garbage out. The Copenhagen climate summit was convened to get the leaders of nations to commit to sharp reductions in carbon dioxide emissions -- and thus sharp reductions in almost all energy usage, at huge economic cost -- in order to prevent disasters that supposedly were predicted with absolute certainty by a scientific consensus.

But that consensus was based in large part on CRU data that was, to take the charitable explanation, "complete rubbish" or, to take the more dire view, the product of deliberate fraud.

Quite possibly the CRU e-mailers were sincere in their belief that they were saving the planet. Like Al Gore, they wanted to convince the world's elites that the time for argument is over, the scientific consensus is clear and those who disagree can be dismissed as cranks (and should be disqualified from receiving research grants). If they had to cut a few corners, well, you have to break eggs to make an omelette.

For those of us who have long suspected that constructing scientific models of climate and weather is an enormously complex undertaking quite possibly beyond the capacity of current computer technology, the CRU e-mails are not so surprising.

Do we really suppose that anyone can construct a database of weather observations for the entire planet and its atmosphere adequate to make confident predictions of weather and climate 60 years from now? Predictions in which we have enough confidence to impose enormous costs on the American and world economies?

Copenhagen, despite Barack Obama's presence, seems sure to be a bust -- there will be no agreement on mandatory limits on carbon emissions. Even if there were, it would probably turn out to be no more effective than the limits others agreed to in Kyoto in 1997. In any case, China and India are not going to choke off their dazzling economic growth to please Western global warming alarmists.

The more interesting question going forward is whether European and American governmental, academic and corporate elites, having embraced global warming alarmism with religious fervor, will be shaken by the scandalous CRU e-mails. They should be.