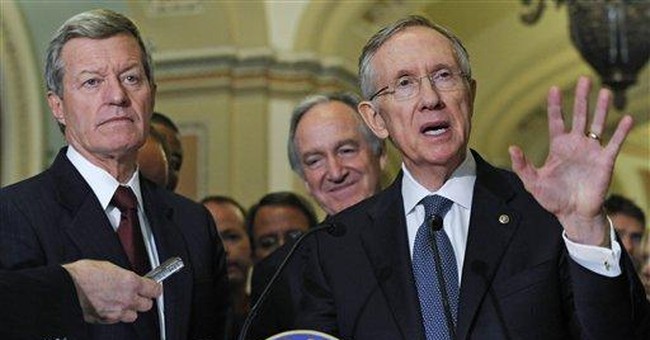 Yes, that is what the Congressional Budget Office estimated. But, as the CBO noted, there's no actual Baucus bill, just some "conceptual language." Actual language, CBO noted, might result in "significant changes" in its estimates. No wonder Democratic congressional leaders killed requirements that the actual language be posted on the Internet for 72 hours before Congress votes.

One way is taxes. The Baucus conceptual language includes a tax on high-cost insurance plans ($210 billion), penalties for not having insurance ($27 billion) and "indirect offsets" (whatever they are -- $83 billion).

In addition, costs are fobbed off on state governments in the form of more Medicaid spending, and savings are projected from future reductions in Medicare that will surely turn out to be imaginary (Congresses of both parties have acted to prevent such reductions every year since 2003).

We know from past experience that cost estimates of all government health care programs (except the 2003 Medicare Part D prescription drug benefit, which has private market competition) tend to understate actual costs. So the Baucus bill -- er, conceptual language -- if enacted is likely to expand government spending by more than the estimated $829 billion.

The Baucus measure subsidizes low-income families. Say you make $48,000 a year and get a $900 subsidy. As your income rises, this subsidy would be phased out, raising your effective marginal tax rate to as much as 70 percent. How long will Congress let this stand?

And perhaps even more. The Wall Street Journal's Kimberley Strassel points out that well-placed senators are getting special favors in the bill. Majority Leader Harry Reid gets the feds to pick up Nevada's extra Medicaid spending. Charles Schumer gets many high-cost insurance plans in New York exempted from tax. How long before other members seek similar breaks for their states?

The Baucus bill attempts to force more Americans to buy health insurance policies designed according to government specifications, which means they will be very expensive and consumers will be shielded from costs. But that's likely to produce an increased demand for health care procedures and bend the cost curve not downward but upward.

Market incentives like those in Part D that might shift it downward are pretty much absent from the Baucus bill. All this will still, according to CBO, leave 25 million Americans without health insurance.

CBO estimaters are constrained by budget rules from guesstimating how costs will skyrocket because of political pressures. The rest of us are not. We can regard CBO's estimate of $829 billion in additional spending not as a ceiling but as a floor.

We can reasonably conclude that the Baucus bill -- or whatever similar measure Reid and Schumer concoct -- would vastly and permanently increase public sector spending and impose a crushing burden on the private sector in a weak economy. That burden would be particularly heavy on low earners forced to buy expensive policies or else pay stiff fines, with money they would otherwise receive as wages or salaries.

There are no good public policy reasons to pass such a bill hurriedly and before it can be fully analyzed and debated. Only political reasons: line up enough Democratic members before they can process the public opinion polls that show most voters hostile to such measures and before they are faced with probable though not certain Democratic defeats in Virginia and New Jersey in November.

Too bad the Nobel committee doesn't have a vote.