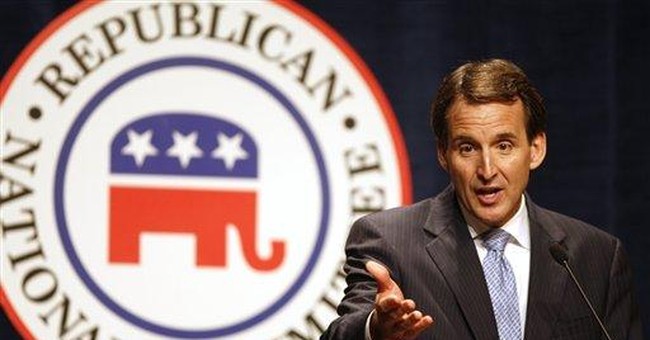 There are more conservatives than Republicans and more Democrats than liberals. That's one of the asymmetries between the parties that helps to explain the particular political spot we're in. The numbers are fairly clear. In the 2008 exit poll, 34 percent of voters described themselves as conservatives and 32 percent as Republicans; 39 percent described themselves as Democrats but only 22 percent as liberals.

It's been this way for a long time. The premise of John Kenneth Galbraith's "The Liberal Hour," published in 1960, was that conservative politicians wanted to identify themselves as liberals, as supporting Franklin Roosevelt's New Deal, when it came time for elections.

But as in his description of the economy in "The New Industrial State," Galbraith was telling us how things had been, not how they would soon be. By the late 1960s, with riots blazing in big cities and rebellions roaring on university campuses, the balance shifted away from liberals and toward conservatives.

But the Democrats have a problem here. The party's leadership currently tilts heavily to the liberal side. Barack Obama is from the university community of Hyde Park in Chicago. Speaker Nancy Pelosi is from San Francisco, and important House committee chairmen are from similar "gentry urban" locales -- Henry Waxman from the West Side of Los Angeles, Charles Rangel from a district that includes not only Harlem but much of the Upper West Side of Manhattan, Barney Frank from Newton, Mass., next door to Boston.

Of the 21 top leadership members and chairmen, five come from districts carried by John McCain, but the average vote in the other 16 districts was 71 percent to 27 percent for Obama.

All these Democratic leaders understand that their home turf tilts far left of the rest of the nation. But a politician's political base is ultimately his or her reality principle. Moreover, most of these leaders -- though Obama obfuscated this in his campaign -- have strong, long-held convictions that are well on the left of the American political spectrum.

These are the people -- the House leaders more than Obama, surprisingly -- who have shaped the Democrats' stimulus package, cap-and-trade legislation and health-care bills. The rules of the House allow a skillful leader like Pelosi to jam legislation through on the floor, although she's had more trouble than expected on health care. But their policies have been meeting resistance from the three-quarters of Americans who don't describe themselves as liberals.

Republican leaders tend to come from mostly suburban districts closer to the national political average. Of the 19 lawmakers who are in the GOP's House leadership or who are ranking committee members, four come from districts carried by Obama. The average vote in the other 15 districts was a less-than-landslide 57 percent to 41 percent for McCain. Only three of those districts voted more than 60 percent for McCain.

In these circumstances, the Republicans have been winning the battle for public opinion and, more importantly, for public enthusiasm -- in sharp contrast to 2008. Democrats complain that Republicans have no alternatives on health care or other issues. Actually some of them do, but no one is paying any more attention to them than people did to Democratic proposals four years ago, when Republicans held the White House and congressional majorities.

The exit poll showed that though the Republican label had lost support since 2004, conservatives did not lose their edge over liberals. The health-care debate has shown that the economic distress caused by the financial crisis and recession has not, at least so far, moved significant numbers of Americans to change their views on the proper balance between markets and government.

"I don't want the folks who created the mess to do a lot of talking," Barack Obama said on a campaign stop in Virginia on Aug. 6. "I want them just to get out of the way so we can clean up the mess."

When a politician tries to stop debate, it's a sign he's losing the argument. Obama seems to have let the House Democrats overplay their hand. He ignored the fact that in our system neither party ever has all the advantages.