Micah Rate
|
Posted: Sep 28, 2017 3:00 PM
Share   Tweet
The opinions expressed by columnists are their own and do not necessarily represent the views of Townhall.com. 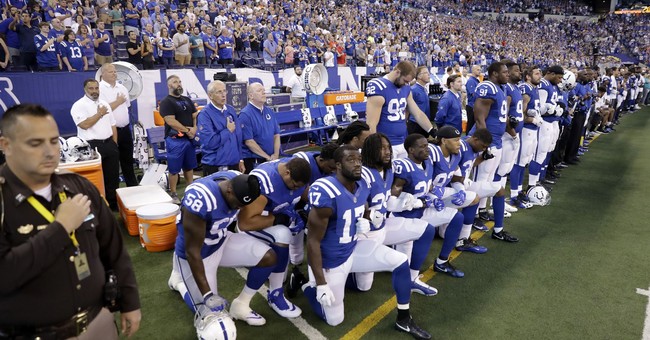 The national anthem protests by NFL players and the recent league-wide protest of President Trump's tweets that called for the firing of all players who kneel for the anthem have been talked about ad nauseam. It has now reached a point where many Americans simply don’t want to hear about it anymore, myself included. However, there is a line of thought going around that needs addressing. The argument put forward is not only misguided but distasteful.

As the protests in the NFL involve a significant percentage of African American players, the question going around is as follows: Is there any form of protest from the African American community that white people will accept?

The answer to that question, the answer that is being spread by those who don't like the fact that there are those who are displeased with the actions of a handful of NFL athletes, is no. Apparently, white people only want members of the African American community to sit quietly and shut up. Apparently, white people don't care about the potential grievances of the African American community and do not care to hear them out. This line of thinking is blatantly false and to insinuate it holds any merit is appalling.

Why is this question being asked in the first place? Well, someone, somewhere, did some digging and resurfaced poll results from the 1960s. In 1964, the polling organization known as Gallup asked white Americans how they felt about the Civil Rights movement and the demonstrations led by Dr. Martin Luther King, Jr. and other civil rights activists.

What were the results? When asked "Do you think mass demonstrations by Negroes are more likely to help or more likely to hurt the Negro's cause for racial equality," to no one's surprise, 74 percent of white Americans said it hurt the African American community's cause. That was to be expected, as whites were still treating African Americans as second-class citizens. The responses, of course, were significantly affected by rampant racism and ignorance.

But fast forward to 2016 when the NFL protests first started with, at the time, San Francisco 49ers quarterback Colin Kaepernick taking a knee during the national anthem to protest police brutality. In their poll, Reuters found that 61 percent of respondents disagreed with Kaepernick's actions and 71 percent thought they were unpatriotic. However, 64 percent of people said he had the right to protest, and 46 percent said he shouldn't face any form of punishment.

The results of the two surveys, more than 50 years apart, are night and day.

But are we going to say, to quote another columnist, "What has not changed is that whites generally resent organized efforts by African-Americans to raise grievances and seek change"?

Here is something that needs to be recognized. The "resentment" is not present because of the "organized efforts by African-Americans to raise grievances and seek change." The resentment, anger, frustration, etc. is because of the level of ignorance from those protesting, regardless of their race, and the fact that the protest isn't initiating change, it's merely sowing division and is overshadowed by idiocy. Let me provide some examples.

1. Colin Kaepernick and other players kneel during the national anthem even though the flag and anthem symbolize the very thing they are hoping to promote, liberty and justice. Rather than focus on morally bankrupt police officers, they redirect their protest at a beloved national symbol or, in the case of this weekend, President Trump.

Did MLK, Jr. ever do something like this? I agree that the United States is not safe from critique, but MLK, Jr. never knocked down what the country swore to uphold. Rather than say America wasn't great, he used the nation's founding principles to show the glaring hypocrisy in society, and he then used those principles to enact lasting change. It's worth noting that this idea that America is not great or good permeated last year's election, on both sides of the aisle.

2. Kaepernick, while protesting police brutality, wore a Fidel Castro t-shirt to a press conference. The irony was too rich to handle. The police officers are oppressors of the state, but I am going to wear the shirt of a dictator who ruled his state with an iron fist? Makes sense.

Fidel Castro was responsible for the execution of hundreds, perhaps thousands, of Cuban dissidents. Castro's government "refused to recognize the legitimacy of Cuban human rights organizations, alternative political parties, independent labor unions, or a free press." The ruthless dictator even imprisoned gays and allowed for racism to grow against blacks.

3. Kaepernick, during warm-ups, wore socks depicting police officers as pigs. An effective messaging strategy, don't you think? People will listen and like you even more then!

4. Black Lives Matter pushed the "Hands Up, Don't Shoot" narrative even though it was a lie and created chants like "Pigs in a blanket, fry 'em like bacon!"

5. Rather than march and protest peacefully, riots erupted in cities like Ferguson, Missouri and Baltimore, Maryland.

The list can go on and on. The reason why these protests appear to fall on deaf ears or result in anger and frustration is not that of white racism and white people ignoring the message. The grievances do not move forward because absurdities damage the message.

Now I don't talk about race all that often as I don't like to come across as if I am telling others how they should feel. Therefore, it would be nice if people didn't accuse white people of being unsympathetic to the African American community.

Over 90 percent of Americans think it is reasonable and even a smart idea for police officers to wear body cameras to protect the officers and whoever the officer may be interacting with to decrease instances of police brutality. If you show white Americans a crooked cop, and the evidence is clear, they will agree that he should be fired and prosecuted. When Walter Scott was murdered in cold blood by Officer Michael Slager, many said Slager should go to prison for life or receive the death penalty. For most reasonable people, if you have an issue you care about and can articulate the problem we will agree that something needs to be done.

As conservative Ben Shapiro stated in a debate, "There is no solution in simply saying there is racism out there. How does that solve anything?... Show me a law that is racist in intent, and we will agree. Show me a police officer who commits a racist act, and I will agree."

There are multiple avenues NFL players can use to have their voices heard that are not divisive or that politicize an apolitical sporting event. They could look to Twitter, for example. NBA player LeBron James' tweet that called President Trump a "bum" was retweeted over 660,000 times and liked over 1.4 million times. They can speak from a podium before and after games (it just might be a good idea to leave out the Castro attire).

The United States also has a president in Donald Trump that loves the media spotlight. If the African American community wants to be heard and if they want to initiate real change, why don't they reach out to the President of the United States directly? They already have his attention. If they are unwilling to meet with the president because he's a "white supremacist" or other government officials who are responsible for enacting change, is this really about change or is it about pride and making a scene?