Melody Potter
|
Posted: Sep 18, 2018 9:35 AM
Share   Tweet
The opinions expressed by columnists are their own and do not necessarily represent the views of Townhall.com. 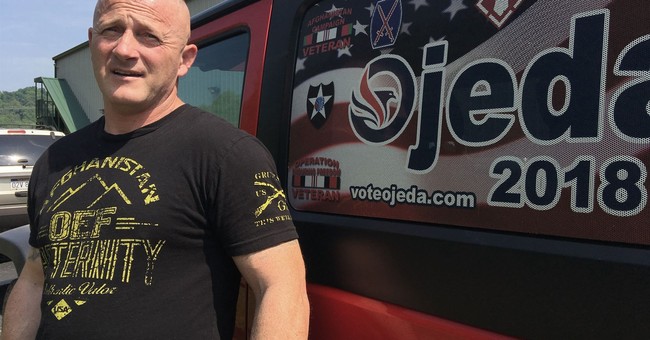 Democratic congressional candidate Richard Ojeda pretends to be a blue collar guy who’ll stand up for West Virginia’s values, but he actually espouses extreme Democrat views that will devastate the Mountain State.

Much like top Democrat leaders in Congress, Ojeda would be yet another Democrat in Washington who supports economic and environmental regulations that threaten West Virginia’s economy. Their radical, far-left policies strike at the very core of our way of life in the Mountain State.

Ojeda would inevitably follow the lead of House Minority Leader Nancy Pelosi, who recently mocked the coal industry by saying “with all do respect to West Virginia, we’re not gonna have a coal-powered plant.”

Ojeda’s own talk about “biofuels, solar, wind and other energy resources” as an alternative for West Virginia is merely a sign of his willingness to be an eager footsoldier in the Democrats’ war on coal.

The stifling regulations imposed on our state during the Obama administration cost the mining industry 64,000 jobs. The last thing we need is to give Democrats another opportunity to damage an industry so vital to West Virginians’ way of life.

Under President Trump’s pro-business policies, the mining industry is finally recovering from the Democrats’ campaign to destroy it, with at least 8,000 mining jobs added in his first year in office.

Regulations aren’t the only policies from the Trump administration that are delivering a powerful recovery for West Virginia’s economy. Tax cuts are responsible for record job creation and wage increases across the state. Sure enough, this too is something Richard Ojeda will support taking away from hard working West Virginia families.

Democrats plan to repeal President Trump’s Tax Cuts and Jobs Act — a bill they consider to have provided nothing more than crumbs for the middle class, but actually gave thousands of West Virginians bigger paychecks.

As for immigration, the Democrats want open borders that would leave us defenseless against criminals who cross them. Members of the party have called for an abolishment of immigration enforcement, and one even vowed to prosecute ICE agents for doing their job. Beholden to his party leader Pelosi, Ojeda will no doubt support them.

Ojeda may try to claim the mantle of moderate Democrat in the mold of Senator Joe Manchin, but don’t believe it. While he claims to have voted for Donald Trump in 2016, he vigorously opposes the Trump agenda now, and even appeared in Michael Moore’s film “Fahrenheit 11/9,” which compares the election of President Trump to the 9/11 attacks.

“Come on. It’s been a circus,” Ojeda has said of President Trump’s time in office. “Put your cell phone down. Stop tweeting and fighting with Rosie O’Donnell... Kick your kids out of the Oval Office.... Be a president… this is just brutal.”

Maybe Ojeda is deliberately turning a blind eye to West Virginia’s economic revival and the milestones our country is reaching nearly every day. Or maybe he’s just like the rest of his radical, out of touch party that can’t handle the fact that President Trump is succeeding.

Given Ojeda and his party’s hostility towards President Trump and all of the good work the President is doing in our state, it’s clear that West Virginians must send a Republican to Washington instead of Richard Ojeda.

We want to continue to see more tax cuts, deregulation, and peace and prosperity both at home and abroad. We want to see West Virginia’s economy continue to reach new heights. We want a safe country secure from foreign threats. And we want America to become great again.

Ojeda and the radical Democrats are fundamentally opposed to all of these things.