Melissa Henson
|
Posted: Feb 03, 2021 12:01 AM
Share   Tweet
The opinions expressed by columnists are their own and do not necessarily represent the views of Townhall.com. 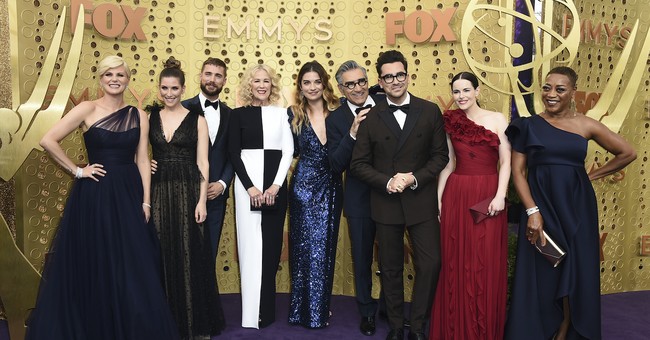 One of the results of quarantine has been that families have frequently turned to watching TV together.

But a disturbing trend has emerged. Families are also relaxing rules about the content they watch together.

In a piece for the New York Times, Carrie Goldman writes “It’s OK to Watch ‘Schitt’s Creek’ With Your Kids!” “Back in August,” she explains, “my family of five had hit a pandemic wall. We had played every board game, read every book and baked all the chocolate desserts we could find. By October, we had even grown listless with our TV options.” And so, despite the mature content, she allowed her 10-year-old and 13-year-old to watch “Schitt’s Creek,” a TV-MA-rated series available on Netflix.

Lest you believe that this is just a singular occurrence, it is not.

The Washington Post is also encouraging parents to toss aside any qualms about exposing kids to mature content by suggesting the TV-MA-rated “Bridgerton” among recommended shows to watch with your kids.

While a popular show among adults, just one episode of Bridgerton contains 31 scenes of sex and 19 scenes of nudity (according to video filtering service Vid Angel). Yet the Washington Post lists it among recommended viewing for children as young as 16. If Bridgerton was a film, it would automatically receive an R-rating, which means children 17 and under would require a parent to join them.

While there are many issues with the TV ratings system, TV ratings trend towards being too permissive.  Content that should rightly be rated TV-MA is often given a less-restrictive TV-14 rating.

So if a program is rated TV-MA, you can believe that rating is well deserved, and should be heeded.

The New York Times piece provides this cringe-inducing justification for exposing kids to inappropriate content: it gives families “more to talk about” when not much else is happening in their lives these days.

Some people may try to excuse loosening content restrictions by saying, “at least the parents are co-viewing and can mitigate the effects.” But it is still only mitigating – that is, lessening – the impact of on-screen sex and violence. Even co-viewing cannot entirely eliminate the harm parents may be doing by exposing their children to adult content before they are emotionally or developmentally equipped to process and understand what they are seeing.

Very young children, for example, can not readily distinguish between fantasy and reality. A parent can co-view a scary movie with their child and say, “Don’t worry, it’s only a movie,” but that doesn’t make the child any more developmentally ready to understand that what they are seeing on screen isn’t real.

Indeed, co-viewing can sometimes exacerbate the harmful effects of exposing children to this kind of content, according to some psychologists, if all the parent is doing is co-viewing (as opposed to discussing or contextualizing the content) or if the parent seems to approve or endorse the behavior.

According to the American Academy of Pediatrics, “Evidence gathered over decades supports links between media exposure and health behaviors among teenagers. The exposure of adolescents through media to alcohol, tobacco use, or sexual behaviors is associated with earlier initiation of these behaviors.” Social media use is also linked to high-risk behaviors such as substance use, self-injury, sexual behaviors, and disordered eating – and peer viewers of this content may come to see these behaviors as normative and desirable.

These have been challenging times for all of us, perhaps even more so for parents who are desperately trying to hold things together while simultaneously juggling distance-work and their children’s distance-learning with limited capacity for physical activity and social interaction. We are all doing the best we can.

Ten months into this pandemic, many families have burned through all available family-suitable programming. There has always been a desperate need for appropriate, family-quality entertainment; and that market, which has always been underserved, is struggling more than ever because of the pandemic. Families shouldn’t have to resort to watching adult-rated content because of lack of suitable alternatives.

When watching TV together has taken on even more meaning due to quarantine, surely, Hollywood has a golden opportunity to create programming for families to watch together that is free from explicit sex, graphic violence, and profanity.