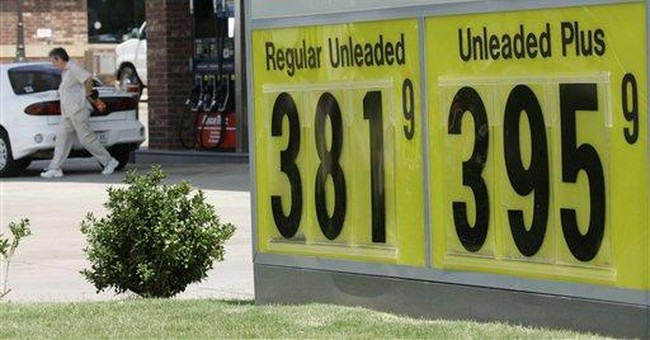 California lawmakers are attempting to reduce gas consumption in the state by fifty percent “to achieve ambient air quality standards and the state’s climate goals,” according to the text of Senate Bill 350.

To reach this lofty goal, the brilliant representatives of the people of the state of California want to place additional regulatory authority in the hands of the California Air Resources Board, a group of bureaucrats, who would then decide exactly how to force citizens to comply.

Some news outlets are couching the issue “as a debate between environmentalists and representatives of the oil and automobile industries,” but this is, and should be, a fight between freedom-loving citizens and their authoritarian representatives, and dictatorial state agencies. The damage to individuals, and businesses, will be catastrophic if this bill passes. It could turn the steady stream of people leaving California into a veritable tidal wave.

The internet could be flooded with articles written about specific groups that will feel the crunch of this regulatory nightmare, but the hardest hit group will be the poor. Gas taxes are always regressive, hitting those who spend a larger percent of their income the hardest. Poorer people also have older cars, cars that will no longer meet state standards, and that will be forced off the road.

How can people barely making enough money to feed their families afford an electric vehicle with a price tag of $50,000?

Even if that price tag drops to $35,000 with subsidies, most middle-income people can’t afford that, let alone those who are struggling to conquer the cycle of poverty. And someone will still have to pay for the subsidies.

Another hard hit demographic will be Millennials. Young people trying to meet educational goals, or find their first job, don’t have the money to pay high transportation costs as they attempt to break the chains of student debt and under employment, especially now as the Fed reports that student loan debt topped credit card, and automobile debt, (not combined) clocking in at a whopping $1.27 trillion.

The best possible policy for those in poverty, and for those starting their working lives in debt, and underemployed, is to grow the economy. The economy cannot grow without abundant, affordable energy. Without fuel like diesel and gasoline, workers cannot travel to their places of employment, and businesses cannot transport goods. Cheap fuel is absolutely key to the American economy.

As for concerns over climate change, there has been no global warming in 18 years, the “consensus” has been thoroughly debunked, and the science so far proves that there is really nothing to worry about—and on the contrary higher CO2 levels are causing global greening and increased crop yields.

“‘It is one of the happy incidents of the federal system,’ (Supreme Court) ‘Justice Louis D. Brandeis wrote in 1932,’ that a single courageous state may, if its citizens choose, serve as a laboratory; and try novel social and economic experiments without risk to the rest of the country.’” Justice Brandeis didn’t intend this statement to be a real defense of Federalism, but an opportunity to promote a socialist viewpoint. California is both an example of socialism as well as of a state that is a laboratory for “novel social and economic experiments.” And the lesson is very clear to the rest of the country—whatever choices California makes, do the opposite.