M.D. Kittle
|
Posted: Apr 16, 2020 11:23 AM
Share   Tweet
The opinions expressed by columnists are their own and do not necessarily represent the views of Townhall.com. 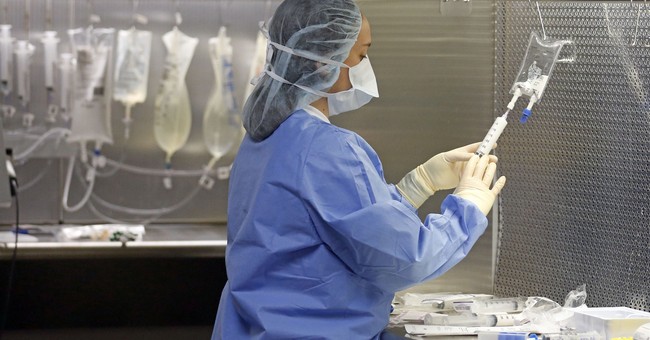 MADISON — A northern Illinois man with fast-growing leg and abdominal aneurysms was forced to cancel his scheduled surgery. His doctor told him the operation, although very necessary, was a “nonessential” procedure in the COVID-19 era.

If left unattended, the aneurysms could cause blood clots, blocking blood flow. If the bulges burst in his stomach, they could cause severe pain, an extreme drop in blood pressure, shock, even death.

But the man, who lives near the Wisconsin border, said his doctor had no choice but to postpone his surgery to free up resources for coronavirus patients.

Concern has risen in the month since the Centers for Medicare and Medicaid Services announced that “all elective surgeries, nonessential medical, surgical, and dental procedures” must be delayed because of the pandemic. In Wisconsin, Gov. Tony Evers’ administration quickly followed suit. The idea was to not tax badly needed hospital space and equipment during the unprecedented COVID-19 crisis.

But what of those whose health has been compromised because they were forced to delay pain-relieving, even life-saving surgeries and tests? They have been asked to sacrifice for the “greater good” of the coronavirus fight.

“What about the dentists that have closed down, the number of mouth cancers they could have detected in the early stages?” said Rep. Mary Felzkowski (R-Irma) a vocal critic of government’s abuse of emergency powers.

“Think of the mammograms, the colonoscopies, the other diagnostic tests put on hold because of COVID-19,” added Felzkowski, a cancer survivor. “A Stage 1 cancer could have been caught before going to a Stage 4.”

“Are these lives any less important?”

And that really is the question, isn’t it.

It’s also about quality of life. As The Atlantic pointed out last month, “elective surgery does not mean optional surgery.” It means “non-urgent.” But urgent is not always easy to define.

Gerard Doherty, chair of the surgery department at Brigham and Women’s Hospital in Boston, told the publication that surgical procedures fall into one of three categories. About 25 percent — such as joint replacements or weight loss surgeries — may be delayed with few serious repercussions. Another 25 percent are life-threatening emergencies, such as serious heart problems or perforated bowels. The remaining 50 percent are the question marks, with “some potential for harm,” Doherty said. That could include some forms of cancer or problems with blood vessels in the arms or legs, like our source from northern Illinois.

Dr. David Hoyt, executive director fo the American College of Surgeons, says not all elective procedures are considered the same under federal and state directives. He said the most serious, such as cancer surgeries and transplants, are going ahead without delay. The ACS also is coming out with guidelines to prioritize certain surgical procedures.

“The commitment of surgeons to serve their patients is unyielding,” Hoyt said. Maybe, but those decisions aren’t always up to doctors.

“I’m one of many Americans waiting in limbo for a surgery because of coronavirus. I have a hip problem that cannot be solved with physical therapy, and my quality of life is miserable while I wait for the hospital — cleared out to make way for potential COVID-19 patients — to reschedule my procedure,” wrote an anonymous source in The Federalist.

And the basics, primary care medicine, have taken a back seat to the pandemic. In a March 20 memo from the Department of Health Services, the agency advised Wisconsin dental practices “postpone all elective and non-urgent care treatment” until after the public health emergency has passed.

When will that be? Evers says it could be a month before he even begins to soften his “Safer at Home” order.

“I would fully expect another couple of weeks, a month, before we are in a position to actually say we’re ahead of the curve here and after that, we can start thinking about how we can relax things,” Evers told the television station,”  KSTP-TV in Minnesota.

His emergency powers, however, would be subject to legislative approval by May 12, according to state statute.

For now, dentist offices like Thousand Oaks Dentistry in Sun Prairie are complying.

“In light of the current coronavirus outbreak, our office has transitioned to limited hours for emergency procedures under state guidelines,” the practice’s voicemail message states.

The same goes for the Milwaukee-based Wisconsin Surgery Center, which is closed until further notice, “with the hope of opening in early May.”

What will the lapsed health care toll be by that time for the many waiting for “non-essential” procedures?