Matt Vespa
|
Posted: Nov 24, 2020 12:01 AM
Share   Tweet
The opinions expressed by columnists are their own and do not necessarily represent the views of Townhall.com. 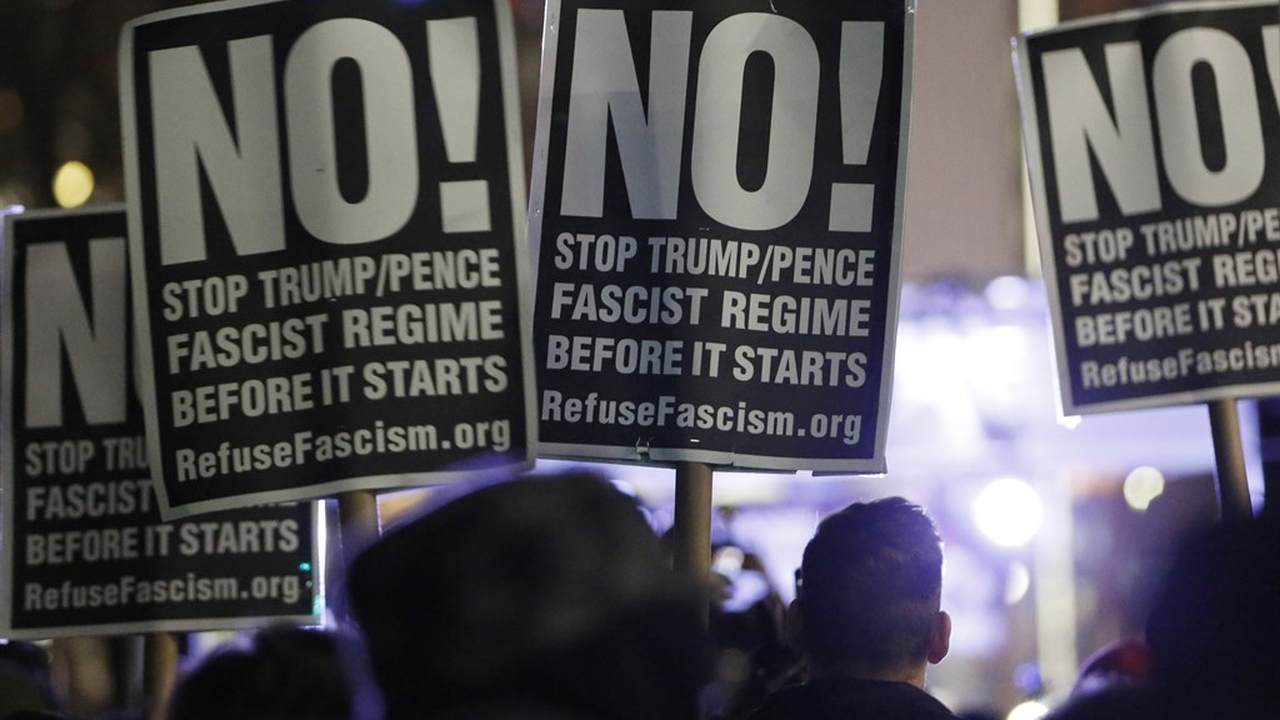 We all saw it. We all saw these liberals dance in the street, opening bottles of champagne, sharing said bottles, and celebrating the end of the Trump administration. It occurred in every major city in the country. For months, these people peddled COVID panic porn. And now, the pandemic is over. It’s not, but you all know what I mean. As of now, Michigan has certified its election results. Pennsylvania is not far behind. All have Biden winning those states. You will never convince me that Joe Biden won the 2020 election fair and square. I believe voter fraud occurred, but it’s hard to prove when cities like Philadelphia have their workers destroy ballot envelopes. Proving voter fraud to the point where it leads to ballots being tossed is a high bar, a very high bar. And so far, the Trump legal team has been a mess. Where’s the bombshell evidence? Even Rush Limbaugh called them out on it. The clock is running out. In fact, it may be too late now to reverse this thing. The General Services Administration has told the Biden team that a formal transition has begun. And while it sucks that Trump will no longer be president (I know it kills a lot of you to hear that—I agree), we must look to where we can mount a defense.

Here’s what’s so maddening about this election. Unlike Obama’s 2012 re-election, where he lost millions of voters, Trump’s 2020 race earned him ten million more. He still had solid white working-class support. More Black, Asian, and Hispanic voters climbed aboard the Trump train, numbers that Mitt Romney could only dream of achieving with these voter groups. Trump also doubled his support among LGBT Americans; almost 30 percent of those in this group voted for Trump. The Trump base is a multi-racial voter base with white working-class voters as its backbone. Why did Trump fail to slaughter Biden? He did drop a couple of points with the white working class in the Midwest—and small changes can lead to very bad election nights. At the same time, Trump was not toxic to the GOP. I mean, he is the GOP.

Democrats were projected to win 10-15 seats. They’ve lost seats, with some races still outstanding. Speaker Nancy Pelosi could have the smallest House majority since the New Deal, and there will be very little room for error on bills—and nothing crazy could really be pushed, like defunding the police or gun confiscation. At the state level, not a single state house legislature flipped, or at least the ones Democrats really, really wanted to take back. This is stinging since this was a multi-year project. This is a redistricting year. And now the GOP remains in control of mapping the lion share of congressional districts for another decade. Democrats fared poorly in the Senate. Right now, all eyes are on Georgia to see who will control the upper chamber in the next Congress. In all, down-ticket the Democratic Party was eviscerated. In the highest turnout election ever, the Democratic Party couldn’t manage to generate a blue wave. It was anything but—and it shows that no voter bloc belongs to anyone. Democrats probably should pay attention to their massive drops in Hispanic support, which was clearly evidenced in Texas's border counties, where Trump quintupled his support in counties that are 95 percent Hispanic.

And now, with Biden’s picks for cabinet positions, I’m sure Janet Yellen as Treasury Secretary did not bode well for those in the Bernie Sanders camp. Isn’t she the former chair of the Federal Reserve? Isn’t she too safe? Isn’t she part of the old guard? Yes, to all of the above. It also makes those Georgia runoffs essential: Biden’s picks have to get through a Republican Senate. In all, Joe can’t pick crazy lefties or push through agenda items that cater to that vein of politics. The Green New Deal is dead. And that should anger a lot of progressives. They voted for a caretaker to do what—not push hyper-left-wing social justice initiatives for four years. Gaming this out, can a die-hard leftist wait almost a decade before trying to push defunding the police, Green New Deal action items, high taxes, and single-payer health care? Nope. And yet, that’s what’s going to happen. For the Left of America, truly, their best bet was to give Trump a second term and get another wide-open field in 2024, where history would be against the GOP. We all know usually after eight years, the American voter wants a change in the Oval.

A lot of Obamaites and those who are simply unpalatable picks to lead the Biden administration will be selected.

"Why did I vote for this guy?" is going to be echoed more than once from the vocal progressive Left. Well, this is the prize, kids. In the words of Saint Mick, "You can’t always get what you want." That goes for both camps. Sadly, it looks like Trump won’t be able to secure a second term. For Biden, he won’t be able to do nearly one-third of what he wants to do on the big-ticket items. If history repeats itself concerning midterm elections, a red wave will probably neuter him completely legislatively. We do have to worry about new wars with Biden’s folks. For the progressives of America, yes, it looks like you beat Trump, but it cost you everything.

You will never get the majorities needed to do what you want to do if you keep peddling gun-grabbing, high taxes, defunding police, socialized medicine, mocking of non-college-educated Americans, and God. We’re the most religious country in the industrialized world, almost 60 percent of Americans are without higher education, and we, as a nation, own loads of guns. Sorry, liberals, America is not your SoulCycle class. It’s not your grad school classroom. It’s not New York City. You’re not the majority. Yes, you keep winning national elections, but so what if the rest of the offices below that are easily defended by Republicans? You may occupy the Oval Office, but you’re never going to be able to do any of the Castro-Esque changes you lust over at the local Starbucks. Our system may seem unfair to you, but it’s genius in keeping the rest of us normal people safe from you cretin.

I know it’s not what you want to hear. I don’t want to believe that the Trump era is done (for now). Remember, Trump can run again in 2024—and he should. The primaries would be over the second he announces, by the way. He has made this known as a possibility with Sen. Kevin Cramer (R-ND). So can we tread water with Joe for four years? I think we can. We survived Obama. We can certainly survive Joe who doesn’t have nearly as much political skill as Barry. Oh, and remember, we have a couple of red wave midterm years under the Obama years too to keep him in check.

We have solid ground to block a lot of what Biden wants to do. We have a totally altered federal judiciary system. We have a solid 5-4 conservative majority. The Democrats have a much-reduced House majority and I’m confident we can hold the Senate. Our message of lower taxes, freedom, patriotism, supporting law and order, our police, fewer regulations, and a smaller government will and has attracted voters from across all groups. Look at the 2020 exits. Trump already did it. Meanwhile, Democrats have to grapple with their regional bias. The coasts and cities are loaded with the professional Left, the snobby elitists who think those without college degrees hold no valuable opinions, the ones who peddle the lockdown regime the hardest in order to hurt rural Americans the most. It’s all about bleeding GOP areas the most, hence why “we’re in this together” is a tone-deaf war cry for battling coronavirus. These folks would be shocked by how many Americans simply do not have the luxury of working from home. And yet, these liberals are the ones who will give to Democrats at disproportionate rates, forcing party leadership to entertain some of the most unhinged and inapplicable policy suggestions of all time, like defunding law enforcement. White college-educated liberals are taking over the Democratic Party at the expense of everyone else, even those who are super "woke." Money still talks—and the Black, Hispanic, or Asian foot soldier who doesn’t dole out checks in the thousands is going to be ignored or put on hold. That could lead to a blow-up. I mean these folks burned down half the country over the summer, so I can only imagine what would happen.

The brutal truth is that there was no blue wave. America is not "woke." America is not an elitist snob echo chamber like the ones these disgusting Democrats inhabit and most of their precious action items will be shelved, thanks to Trump buoying the GOP down-ticket. Why he couldn’t do so for his own race circles back to debates about voter fraud and white working-class voters. The Trump era is not over. The Republican Party is Trump’s party—and I’m okay with that. Whatever happens, a Biden presidency will have to deal with a formidable GOP opposition across all fronts. I’m confident we can hold him at bay and then bury his legislative agenda in 2022. It would be a nice prelude to Trump 2024, no?