After This Stealth Edit on Biden Sexual Assault Story, Is The New York Times a Rape Apologist Publication?

Matt Vespa
|
Posted: Apr 14, 2020 6:00 AM
Share   Tweet
The opinions expressed by columnists are their own and do not necessarily represent the views of Townhall.com. 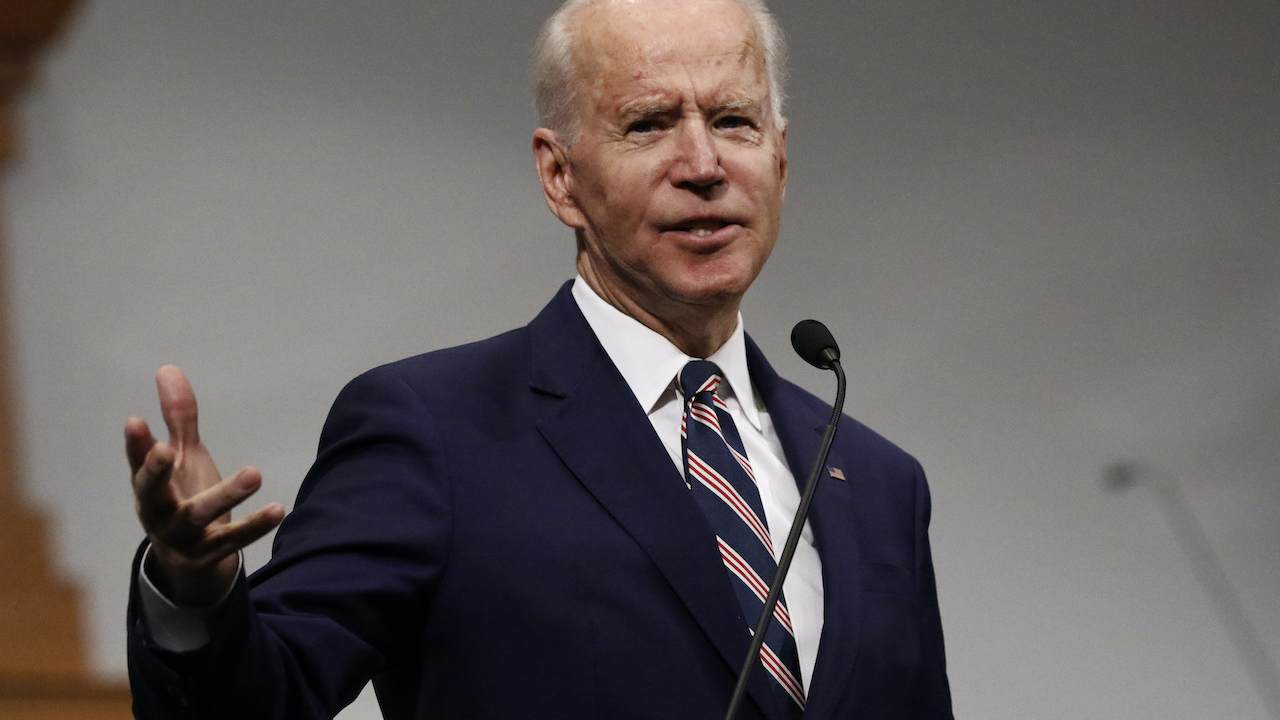 Former Vice President Joe Biden is going to need all the help he can get if he wants to defeat President Donald Trump in November. He may be the best candidate for the 2020 Democratic field, but that's no guarantee of victory. In 2012, Mitt Romney was the "best person" to beat Obama, but it wasn't enough.

Biden is confused, doesn't know where he is half the time, and now needs his wife, Jill, to avoid senior moments. He thinks he's running for the U.S. Senate (you all saw that error) and is now presiding over a deflated Democratic Party. The energy comes from the grassroots; they're progressive and not really all that enthused for Joe. No one is really. And yes, there will be a Never Biden movement. For the revolutionary, the system needs to be blown up. Why settle for an establishment candidate who won't deliver what you want?

Biden already isn't going down the route on health care that the far Left has craved for decades. Some Democrats may rather sit this election out and try again in 2024—and I think there will be a sizeable chunk of progressives who do the same thing that they did in 2016: either sit out or vote for Trump. The agenda that Biden has, which has been successfully co-opted by leftist Democrats, will not play well in states he needs to win. Time will tell, but how his campaign will handle the green energy and global warming nonsense doled out by the Left will be a huge clue. But now, we have The New York Times running interference on his sexual assault allegation.

There are endless pictures of Joe Biden being creepy with other women, including children. There are stories about how he touched women inappropriately; he's a bit handsy. And then, the odd habit of smelling women's hair. All activities that would certainly be classified as sexual harassment in the workplace, but he's a Democrat. The rules don't apply. It's an entirely different field when a former staffer alleges that the former VP raped her with his hands. As stated in a previous column, a former Senate staffer of Biden's, Tara Reade, alleged that the then-senator penetrated her with his fingers. The Federalist's Emily Jashinsky transcribed the account:

[She] called me in and said, ‘I want you to take this to Joe. He wants it. He wants you to bring it, hurry.’ And I said, ‘Okay,’ and it was a gym bag. She said ‘take the gym bag.’ She called it athletic bag. And she said he was down towards the Capitol and he’ll meet you. So I went down, and I was heading down towards there. And he was at first talking to someone, I could see him at a different distance and then they went away. And then we were in like this side area. And he just said, ‘Hey, come here, Tara.’ And then I handed him the thing and he greeted me, he remembered my name.

And then we were alone, and it was the strangest thing. There was no exchange really. He just had me up against the wall. And I was wearing a skirt and, you know, business skirt, but I wasn’t wearing stockings. It was kind of a hot day that day and I was wearing heels. And I remember my legs had been hurting from the marble, you know of the Capitol, like walking. So I remember that kind of stuff. I remember I was wearing a blouse and he just had me up against the wall. And the wall was cold. It happened all at once. The gym bag, I don’t know where it went. I handed it to him, was gone. And then his hands were on me and underneath my clothes.

And for me, it was like everything shattered in that moment because I knew we alone. It was over, right? He wasn’t trying to do anything more. But I looked up to him. He was like my father’s age. He was this champion of women’s rights in my eyes, and I couldn’t believe what was happening. It seemed surreal. I just felt sick because he, when he pulled back, he looked annoyed. And he said, something else to me that I don’t want to say.* And then he said, I must have looked shocked, and he grabbed me by the shoulders. I don’t know how I looked, but I must have looked something because he grabbed me by the shoulders and he said, ‘You’re okay, you’re fine. You’re okay, you’re fine. ‘And then he walked away and he went on with his day.

And what I remember next is being in the Russell building, like where the big windows are, in the stairs by myself. My body, I was shaking everywhere because, it was cold all of a sudden, I was, I don’t know, I felt like I was shaking just everywhere, and I was trying to grasp what had just happened and what I should do, or what I should say. But I knew it was bad because he was so angry. Like when he left, I could feel, you know how when you know someone’s angry, they don’t necessarily say anything. Like he smiles when he’s angry. And you can just feel it emanating from him.

This happened in 1993. And yet, don't expect Biden to be crucified like Justice Brett Kavanaugh. In fact, The New York Times tried to pull a Beijing wash job on this story with interesting edits that Reagan and Guy wrote about yesterday. Kavanaugh's allegations of sexual misconduct had no corroborating evidence, but it was taken as gospel because he was a conservative, the Supreme Court was on the line, and the liberal media, along with their Democratic allies, were looking to avenge the aborted Merrick Garland nomination. The GOP stood firm. We were the ones who got supreme revenge, but not after one of the nastiest confirmation battles since Clarence Thomas. Over what? The liberal media's coordinated character assassination of Kavanaugh led to them running with insane stories, like Julie Swetnick's allegation that Kavanaugh was part of some gang-rape ring in high school. No one believed her and she pretty much recanted all of it. She was a box of fruit loops. Still, there was no direct evidence proving that Kavanaugh did any of this. For Biden, there appears to be more evidence than all of the Kavanaugh accusers put together, but he's a Democrat. And with that, you get a very Democrat-media complex approved whitewash job:

Remember the press spent a month essentially arguing that underage drinking was evidence that Kavanaugh committed sexual assault, but a long pattern of "hugs, kisses, and touching that women previously said made them uncomfortable" proves Biden's innocence. pic.twitter.com/CPGr48o8nK

The New York Times might've stealthily removed "beyond hugs, kisses, and touching" from their article, but they left the tweet up.

So the new standard of sexual misconduct by the @nytimes does not include inappropriate hugs, kisses, and touching.

Remember that for next time. pic.twitter.com/K1yP36WYuj

I don't know whether Ms. Reade is telling the truth, and the presumption of innocence is a vital pillar of our justice system. But this detail alone presents more contemporaneous evidence against Biden than was ever presented against Kavanaugh: pic.twitter.com/wag0IZGF0k

The New York Times stealth-edited its article on the sexual-assault allegation against Joe Biden by his former Senate staffer Tara Reade just minutes after it was published on Sunday morning, removing all references in a key paragraph to the multiple past accusations by seven women that the former vice president had touched them inappropriately.

The Times piece also focuses on unrelated sexual misconduct accusations against President Trump, and largely dismisses Reade's allegations as uncorroborated by her co-workers -- even though the Times notes later in its piece that Reade's claim was contemporaneously corroborated by two of Reade's friends.

According to a copy of the Times' article saved by the Internet archive Wayback Machine, the Times originally reported: "No other allegation about sexual assault surfaced in the course of reporting, nor did any former Biden staff members corroborate any details of Ms. Reade’s allegation. The Times found no pattern of sexual misconduct by Mr. Biden, beyond the hugs, kisses and touching that women previously said made them uncomfortable."

That paragraph now reads: "No other allegation about sexual assault surfaced in the course of reporting, nor did any former Biden staff members corroborate any details of Ms. Reade’s allegation. The Times found no pattern of sexual misconduct by Mr. Biden."

On Monday, the Times' executive editor, Dean Baquet, admitted that the Biden campaign had requested the change.

If you are really observant, you can detect a subtle difference in the way that the New York Times attempted to destroy and defame Brett Kavanaugh with no evidence and how they move to protect Joe Biden from a former employee's accusation. https://t.co/XR7Jz7HW9h

Yeah, two separate rules out in full explicit display here. It's also another story for why the "Believe All Women" war cry is an absolute mess. By this standard, the Democrats' 2020 nominee might be a total rapist. Yet, it's Joe. He's different.

For all the outrage over Trump's alleged sexual adventures, it's a bit interesting to see The NYT become a quasi-rape apologist publication when its side pisses in the Me Too pool. And this isn't the first time. The publication allowed feminist Gloria Steinem to give Bill Clinton a pass on his credible rape allegations back in the 1990s. Why? Well, because he's a Democrat. It's why I don't really care about Trump saying he wouldn't lose support if he shot someone on Fifth Avenue and not lose support. If Bill Clinton were able to run again, you bet scores of Me Too-supporting feminists would engage in some form of linguistic gymnastics to justify them voting for an accused rapist. It's why the Democrats have no moral high ground on this issue. They're no different. They're no better. They rush to defend their side no matter what. The same goes for us. This is politics. It's a war in the gutter, and it's always been this way. It is what it is concerning this corrupt, stinking, nasty, and vile world of politics. And you'll see what lengths people will go to in defending their own.

So, again, please spare me the lectures about how the Democrats are the party for women. They're doing a Chinese propaganda-like production in trying to sweep an allegation under the rug that targets a former VP. Trump Derangement Syndrome can make liberals do some pretty crazy stuff.

Do you think this is why Barack Obama has been keeping an arm's length from him? Or at least up until this point.