Matt Vespa
|
Posted: Mar 31, 2020 6:00 AM
Share   Tweet
The opinions expressed by columnists are their own and do not necessarily represent the views of Townhall.com. 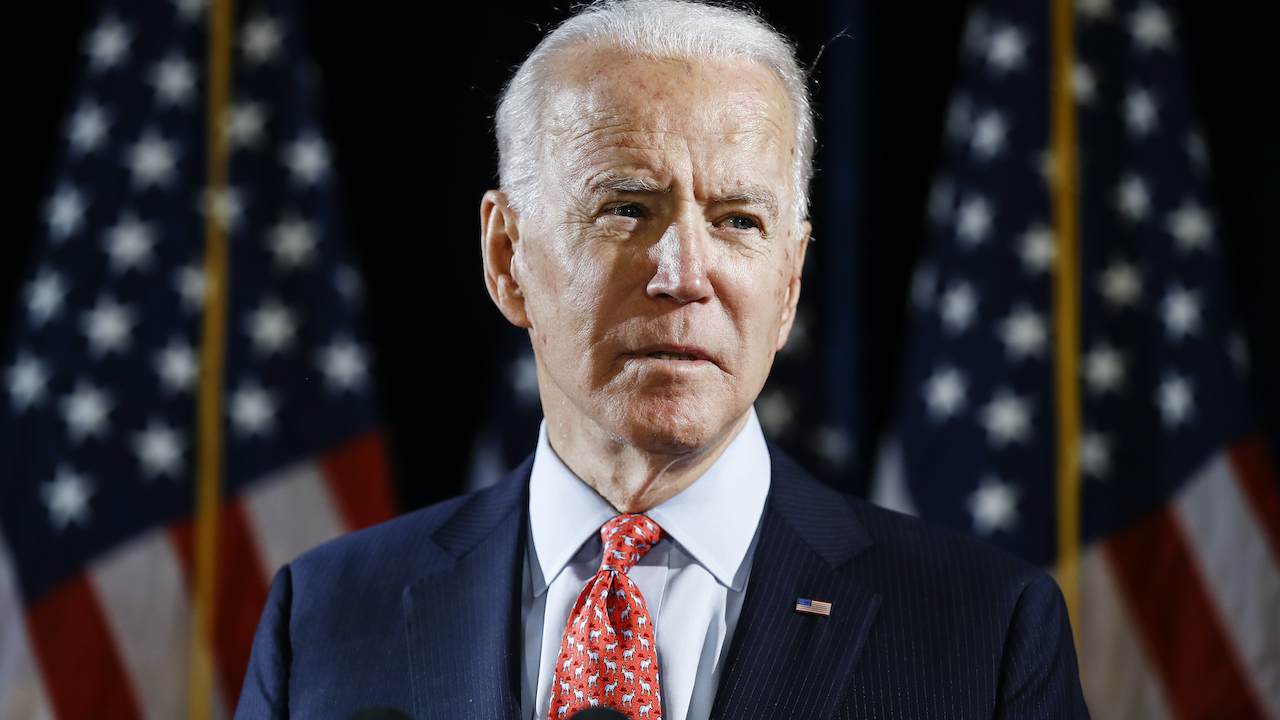 We're dealing with a national crisis right now. The Wuhan Coronavirus outbreak has infected at least 145,000 Americans and killed at least 3,000 people. It's bound to increase in the coming days. The U.S. economy has been ground to a halt. The 2020 election—yeah, remember that—has been impacted as well. So, with the Wuhan virus dominating the news cycle, the former vice president has found the perfect time for the media to do its job and ignore the rape allegation that's been lobbed against him. It's bad, folks. This isn't smelling hair. This isn't creepily putting hands on the shoulders. There is no sitting on Uncle Joe's lap. This isn't meant to be made into a meme. This is a serious allegation of sexual assault. And if we're going by the Left's rules, Joe did it. Joe is guilty. Joe is canceled. Joe must be destroyed.

Liberals created these rules because they do not like due process or individual rights, which get in the way of their lynch mob antics. Well, here you have it: the ultimate blowback. There is nothing better than getting a taste of your own medicine with the "believe all women" garbage that's been peddled by the progressive Left. And because American liberalism is rotten at its core, unprincipled, and immoral—they just change the rules whenever their side gets in trouble. Feminist Gloria Steinem and her crew straight-up ignored the rape allegations against Bill Clinton. It's why liberal America's "Look! Look! Donald Trump's allegations" war cry fell flat because we all know that if Bill Clinton could run again for president, hordes of liberals would vote for him despite credible rape allegations lobbed against him. So, please spare us, liberal America, from the insufferable flaunting of the "defender of women" card. You aren't defenders of women —and you never were. If anything, you've done more to hide the rapes of powerful liberal men for decades until it became uncool to do so.

The Federalist's Emily Jashinsky has a lengthy post with all the graphic details of this alleged assault that occurred back in 1993. The accuser, Tara Reade, was a staffer for then-Sen. Joe Biden. Jashinsky talked about how Reade reached out to the Elizabeth Warren and Kamala Harris camps in order to share her story, which was met with lackluster reception. Then, Jashinsky said Reade tried to share her story with Time's Up Legal Defense Fund—a slam dunk, right? They won't kick her to the curb. Well, they did. And as noted in the piece, the fund's public relations are handled by the progressive SKDKnickerboker firm, which has Anita Dunn on its payroll. Dunn currently serves as a top adviser to Biden's 2020 campaign. Well, Reade did share her story with Katie Halper. Jashinsky transcribed parts of it [emphasis mine]:

[She] called me in and said, ‘I want you to take this to Joe. He wants it. He wants you to bring it, hurry.’ And I said, ‘Okay,’ and it was a gym bag. She said ‘take the gym bag.’ She called it athletic bag. And she said he was down towards the Capitol and he’ll meet you. So I went down, and I was heading down towards there. And he was at first talking to someone, I could see him at a different distance and then they went away. And then we were in like this side area. And he just said, ‘Hey, come here, Tara.’ And then I handed him the thing and he greeted me, he remembered my name.

And then we were alone, and it was the strangest thing. There was no exchange really. He just had me up against the wall. And I was wearing a skirt and, you know, business skirt, but I wasn’t wearing stockings. It was kind of a hot day that day and I was wearing heels. And I remember my legs had been hurting from the marble, you know of the Capitol, like walking. So I remember that kind of stuff. I remember I was wearing a blouse and he just had me up against the wall. And the wall was cold. It happened all at once. The gym bag, I don’t know where it went. I handed it to him, was gone. And then his hands were on me and underneath my clothes.

And for me, it was like everything shattered in that moment because I knew we alone. It was over, right? He wasn’t trying to do anything more. But I looked up to him. He was like my father’s age. He was this champion of women’s rights in my eyes, and I couldn’t believe what was happening. It seemed surreal. I just felt sick because he, when he pulled back, he looked annoyed. And he said, something else to me that I don’t want to say.* And then he said, I must have looked shocked, and he grabbed me by the shoulders. I don’t know how I looked, but I must have looked something because he grabbed me by the shoulders and he said, ‘You’re okay, you’re fine. You’re okay, you’re fine. ‘ And then he walked away and he went on with his day.

And what I remember next is being in the Russell building, like where the big windows are, in the stairs by myself. My body, I was shaking everywhere because, it was cold all of a sudden, I was, I don’t know, I felt like I was shaking just everywhere, and I was trying to grasp what had just happened and what I should do, or what I should say. But I knew it was bad because he was so angry. Like when he left, I could feel, you know how when you know someone’s angry, they don’t necessarily say anything. Like he smiles when he’s angry. And you can just feel it emanating from him.

So, "It's on us" man allegedly penetrated a woman with his fingers? That sounds like rape. That sounds like an election-killer, right there. Forget that Biden, who was already a hardcore liberal, was going to have a terrible agenda—his 2020 roadmap takes us right off the cliff. We're not fighting a liberal agenda anymore, folks. It's now leftist takeovers. We're in the zero-sum game territory. And now, this rape allegation to top it off. Biden will be the nominee, but only because black Democrats decided to buck Sanders again and saw Biden as the only rational choice left to beat Trump. It's not due to his charisma, agenda, or policy positions. That's a brittle foundation for a national campaign and the proof of that is in the polls; enthusiasm for Biden isn't nearly as high as it is for Trump.

This is a "he said, she said" account. There is no corroborating evidence—Jashinsky laid this all out too. But this unveils another hilarious case of liberal media bias. A writer for Vox appeared to be a bit curious as to why only liberal outlets were covering the Joe Biden rape story.

"There is a part of this that's very explicable, which is that mainstream outlets are going to be very, very thorough in reporting before writing up something this explosive. I know for a fact some are looking into the allegations," he tweeted.

Are these people smoking crack? So, what happened to allegations against Brett Kavanaugh being thoroughly reported and vetted? No. Kavanaugh was conservative, he was nominated by Trump, and the media tried to kill him. They took the words of an insane woman—Julie Swetnick—who claimed that Kavanaugh ran a gang-rape ring in high school, and others as gospel. It shouldn't shock us that these stories went nowhere. And then, Swetnick pretty much recanted her story. None of the allegations lobbed against Kavanaugh had any witnesses or corroborating evidence. They were all trash. It was a coordinated political hit. It was a character assassination, the likes of which we haven't seen since Clarence Thomas. This wasn't about the truth. This was about revenge; Democrats were mad that Senate Majority Leader Mitch McConnell successfully blocked Merrick Garland's nomination. Elections have consequences. We won. Democrats lost. We dictate the courts, so cry more, liberals.

I'm not the one who likes to fight for the moral high ground. I couldn't care less. I want to win. Period. Candidate X might be a bad guy. Okay, so what? Will he get stuff done; policy action items I want to be enacted? If so, he or she gets my vote. You'd be surprised what voters will dismiss or outright ignore when their paychecks get bigger and economic opportunity is expanded. Just look at Bill Clinton's presidency.

These are the Left's rules, so we should have some fun. We should take this woman's word of her alleged rape because that's what liberals would do. Shit—they've already done that. We should engage in a righteous crusade to destroy Joe Biden's reputation, ask Jill if she knew, and go on an all-out blitz because this quality of mercy we show for our enemies is not reciprocated in any way shape or form. Look at how the media treats us. Show no mercy for you shall receive none. Scalping Biden would be an achievement. It would certainly send Democrats into disarray. And we can all watch from our social distancing perches as their world burns to ash. That's our 2020 goal. That's the goal of every election year. If we're not afforded due process, why should we be so gracious to people who outright hate us? Can someone explain to me what is the virtue in that?

Joe Biden should be canceled, but due to the liberal media's hatred of Trump, and their overall bias, the former VP will have enough political cover to survive this. In the meantime, I don't want to hear any more lectures from Democrats about how they're the party that defends women.

It's a really shocking interview and I'm not sure how people can support Biden after hearing it. https://t.co/BkzjVG9gq3

The Left just protects the rich, powerful, liberal rapists in their ranks.