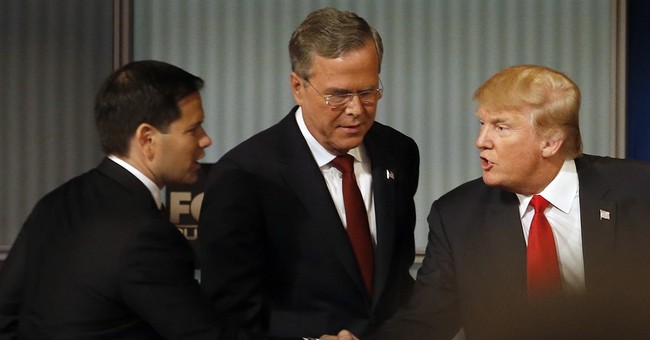 Saint Petersburg, Fla. -- The best debate this year may have passed the moniker of "GOP establishment candidate" from a mentor to his onetime student. Whether it will be a permanent shift remains to be seen. Moreover, it may be a title that no candidate wants to claim in 2016.

The Fox Business debate this week was truly a treat to those who crave bona fide policy discussions among the candidates. The moderators asked meaty questions about issues that impact the economy. As host Neil Cavuto put it afterward, "It wasn't about us. It was about them." That allowed him to accurately proclaim that the debate proved "business can be riveting."

Indeed it was. And in such a format Republicans should take solace that none of the candidates in the so-called "big debate" in any way performed poorly or seemed ill-equipped to take on Hillary Clinton, or whomever, next year.

Frontrunner Donald Trump likely lost little if no ground. Indeed his somewhat paternalistic embrace of the other candidates likely helps his polling when it comes to his "favorability" rating. Dr. Ben Carson blew his critics out of the water as to his alleged "murky" past. Republican voters are not biting at these silly "exposes."

In fact, every Republican candidate had a good night. Ted Cruz continued his effort to become the true "anti-establishment" candidate. Carly Fiorina was again the best debater of the group, leading many to believe she would provide a stark and strong contrast to Hillary Clinton, perhaps as a vice-presidential nominee.

But in the end there are two Floridians vying for what is likely one spot -- to be the "establishment candidate" taking on Trump, Cruz or Carson when the grand dame of all primaries, Florida's winner-take-all, comes around in mid-March.

Let it be noted that most of we pundits are horrible at predicting winners. I would be the last to proclaim Jeb Bush down for the count. For one thing, I polled his gubernatorial reelection in Florida in which insiders were convinced that his Democratic challenger would come on strong and defeat him. In the end, Bush mopped the floor with his opponent and won a second term.

As for Marco Rubio, again I had it wrong. When he ran for the United States Senate against then-popular Florida Republican Gov. Charlie Crist, I proclaimed in a column that Crist was a shoo-in. Wow, was that off-base.

So I've learned to be careful when it comes to predictions. As noted recently, I did suggest as early as late last year that Donald Trump would be a strong candidate, and that proved to be correct. And he remains strong, in part because of what my mentor, Newt Gingrich, has observed about him. In essence Newt suggests that Trump keeps all of his answers at a simple level because most voters connect with that same language. So far it's working.

But someone had to emerge as the policy debate winner. And between Rubio and Cruz, the contest was close.

In the end, it is Rubio who has delivered several debate performances in a row that somehow evoke the style, substance and youthfulness of JFK in 1960.

Contrast that to Jeb Bush: Equally, if not more so, full of gravitas and intellect, but lacking the spark -- the fire in the belly -- that is essential to a winning effort.

So much could change. Trump's "it's going to be great" answers could run their course. Carson's hushed answers and calm responses could become unrealistic. And Cruz's "televangelist" persona could overwhelm his substance as the experienced debater in the field.

But for the moment, with his multi-pointed responses, his cool demeanor and his youthful style, Marco Rubio has become the "establishment candidate" to beat. That's amazing because his onetime "tutor" in Florida was Jeb Bush.

The money will flow to Rubio. The attention he receives will grow. And in the dead of winter, he could freeze up or blossom, as if ready for the spring.

But one thing seems clear. Rubio is on the rise. He would beat his mentor in Florida were the primary held today. And with history as my guide, I won't underestimate Marco again.