Memo to the Donald: Win the Battle Before the War 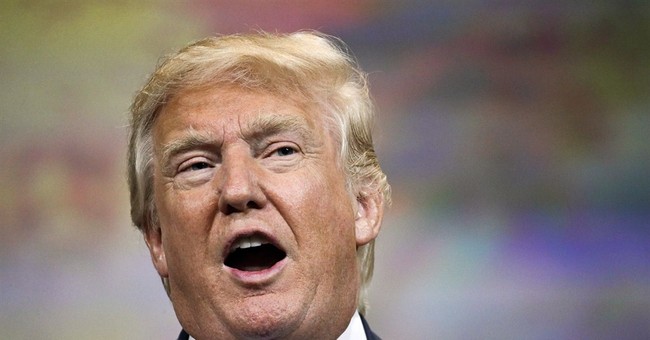 Many years ago, as a young and obnoxious political operative, I sat with about 10 others in a post-speech holding room with then-President George H.W. Bush. It was reelection time in 1992, and Pat Buchanan had just made a surprisingly strong showing in the New Hampshire Primary.

Along with several others -- among them Newt Gingrich -- I made a plea to the president to apologize for the tax increase he had joined with Democrats to pass a year earlier. To our amazement, Bush renounced the tax hike days later. That sealed his victorious "battle" for re-nomination before he lost "the war" to Bill Clinton.

In 2015, one Donald Trump is running for president. Most media commentators view him as a sideshow who has no chance. For Trump, it's about getting into the thick of the battle first, before he can think about winning it. So here's some advice to Trump and his talented team.

First, drop the word "I" from your speeches. If it's all about you, then it's not about the voters. It's that simple.

Second, you have acknowledged your wealth; now, forget about it. It's inspiring to know a man can take a family business and build it into an empire. But even conservative voters can be envious. From now on, the storyline is about the opportunity you can create for others, not the success you have built. If ever a message was already loudly received by everyone, it's your success story. Drop it, or you won't get 10 votes below the Mason-Dixon Line.

Third, spend your money early and spend it right. Job one is to convince likely GOP primary and caucus voters that you are serious and can be a legitimate nominee. That requires early television, not just in the early primary states, but nationally. If you don't end up ranked high enough in the polls, you won't meet the requirements to be in the debates. And while as a pollster I expect your recent announcement to give you a temporary bump in the surveys, you will drop like a rock if people can't envision you as a real candidate. And no debate appearances means no candidacy.

Fourth, don't appear in your own ads. Let someone else brag about you. Let a voiceover describe how you want to reestablish America as a world power and restore opportunity to the average American. And proudly embrace that you are not "another politician." In short, be a populist -- for the people, not yourself.

Five, think presidential. The public is hungering for someone who will be plain-spoken, even blunt. But the GOP will not nominate someone who can't stay on message or who appears to be flighty. Find your message and stick to it. Ronald Reagan could ad lib and quip with the best of them, but when he started getting serious about being president, he toned it down considerably.

Finally, listen to constructive criticism. If Newt Gingrich and George H.W. Bush could do it, so can you.

Readers might wonder, why waste time on Trump? For one thing, other than Dr. Ben Carson, Trump is the only GOP candidate who has never gone through the electoral process. At the presidential level, it's a baptism by fire, and 99.9 percent who do it as a neophyte get burned to a crisp. But a historic exception is always possible.

Donald Trump deserves a realistic chance. He's accomplished as much, if not more, than all of the other candidates combined, both Democrat and Republican. He's tough as leather with a lightning-quick mind. And it appears from everything he's ever done or said that he is truly a man of passion about his country.

It won't be an easy path for "the Donald." If he somehow manages to survive the early primaries, that big "SEC" primary day in a slate of Southern states could do him in. In my mind, this remains a likely showdown among Jeb Bush, Marco Rubio and some third candidate.

Deep down, though, don't you want to see Trump's next "episode?" Trust me, these days, anything can happen. It's in the Donald's hands to start off right.