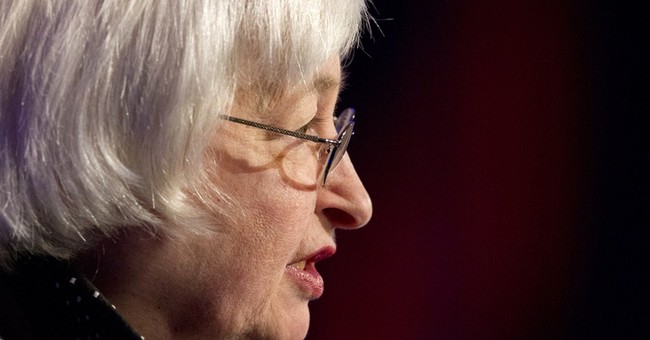 It's interesting and important to note that former Fed Chairman Alan Greenspan's comment about a stock market potentially built upon "irrational exuberance" did not coincide with a drop in the markets. In fact, it took years before the truly irrational stock market, built upon the emerging web technology world, fell apart.

But comments this week by the current Federal Reserve Chair Janet Yellen that equity "are quite high" reminded many of a more muted version of Greenspan's observations years earlier. In the case of Greenspan, his comments were more speculative and were rooted in the theoretical of what could happen -- and it did, "down the road." But in Yellen's case, while the words seemed less flamboyant, they were rooted in more immediate concerns.

For those of us who were not finance majors, let's ignore the various technical observations Yellen shared and focus on the few words that stuck out from her spontaneous answers during a question-and-answer session at a financial conference this week. All one needed to hear from the comments were "equities valued quite high" and, later, the dreaded word "bubble."

A few weeks ago I reported on a study that examined a longstanding consumer survey; it suggested that when the response to the survey hit high positive marks in years past, such as right before the decline of the markets during the tech decline in 2000 or right before disaster struck the economy in late 2007, bad things were not too far down the road. I still can't say with confidence that the same pattern exists this time, since the index has again reached near-record highs.

But I know this: We have an economy in which everyone who works a real job (or wants to) knows that things are slower than they want. They also know that their own wages have not increased much in recent years. And they know plenty of people who gave up looking for a full-time job ages ago. I might add that regardless of what they are told, it costs them more each year to fill up the family grocery cart.

Oh, and let me add that the great cut in gasoline prices they were to enjoy has been steadily melting away over the past three weeks and likely will continue to, as crude oil prices are rising and summer travel is upon us.

Beyond that, for years now our recovery has been built on an experiment at throwing government cash into the system. That came to an end late last year. Could it be that the nearly negative GDP we saw in the first quarter was not a reflection of bad weather around the nation, but instead the first signs of the withdrawal a heroin addict would undergo if deprived of the drug?

We are in uncharted waters, and we have many experts on Wall Street who are still convinced that bad news for all us common folk and our economy is good news for them because it will keep the Federal Reserve from raising interest rates. But for the first time Yellen has hinted that rate increases are not only inevitable but that when they come they could be quite steep and sudden.

If that didn't hit the silk underwear crowd in the financial world in the back of those fancy pants, then nothing will. We have seen our financial markets party like its 1999 for years, while most Americans have struggled to deal with the fallout from banks being choked to death and not loaning money; a healthcare plan that made their lives more costly and complicated; the rise of international threats that are underestimated by their leaders; and a continued assault on everything from manufacturing to small businesses.

The warning has now been issued. We may not have a decline like the dot.com bust or the full meltdown of 2007 and thereafter, but we are likely headed for a major shift in our markets over the next year, if not sooner. So you might not wait until you hear the last champagne glass click in New York to prepare for it.