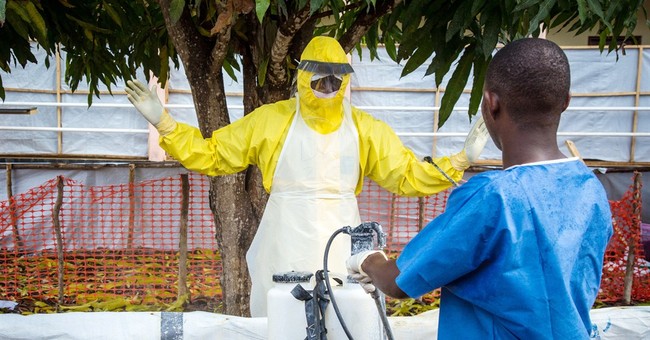 My recent comments concerning the problems that might take place when "Ebola meets the flu season" became all the more serious when America learned that two health care employees who attended to a patient in Dallas are now infected as well. News that one of these two workers flew while reportedly having a low-grade fever just prior to her hospitalization only adds to the nation's anxiety.

To be critical of these brave nurses and other professionals who now are suffering from this wicked virus is cruel and unwarranted. It is becoming increasingly clear that they were led down a path paved by the confidence in the procedures they were told to follow. The admonishments by Centers for Disease Control Director Dr. Thomas Frieden concerning breaches in their personal adherence to safety requirements ignores the bigger issue.

That issue is much larger than these poor nurses or even Ebola.

The bigger issue, one which seems to permeate the federal government and certainly the Obama administration, is one of chaos. I use the term "chaos" not to engage in gross hyperbole -- for this is not obvious mass confusion that we are witnessing. It is instead a cool and carefully controlled reaction by our government to threats on many levels that in every way ignore the weight of the matters -- and, at every turn, allow those threats to compound themselves both in numbers and magnitude.

Now consider the ISIS terror army. We knew months ago that this, as they say, "was not your father's" al-Qaida. Huge sections of Iraq were falling into its hands. But as ISIS was moving in a brutal and rapid manner, our government was caught up in issues related to a shooting in Ferguson. While that shooting may prove to be unjust and even criminal, it shouldn't have justified the high degree of attention and comment by the administration as opposed to the dire threat ISIS poses to our nation and the world.

Yes, the administration finally did respond to ISIS. But I was with what most experts consider to be an unworkable plan that will likely have little impact on this powerful, growing and malicious movement.

Then there is the matter of Russia and its on-again, off-again aggression. President Barack Obama answered Russian strongman Vladimir Putin's flirtations with assembling some version of the defunct Soviet Union with tepid threats and sanctions that may have served to delay aggression, but hardly put it to rest.

Furthermore, while busily touting our "economic recovery," this same administration has continued to ignore the huge number of Americans left behind. Those would include the many who quit looking for work, or who have settled for jobs paying much less than before the Great Recession, or those young workers who have found the job market extremely tough. And of course a high percent are African-American men, for whom joblessness and jail continue to be more a part of their life than "change they can believe in."

Wrapped around all of this is new, emerging chaos surrounding the nation's response to Ebola. An increasing number of Americans believe that the government's response to the spread of this deadly virus is more about preserving "open borders" and political correctness than about preventing the illness spreading to the United States. The claim by the CDC director that a travel ban would somehow make the situation worse seems to most illogical and, in light of recent events, just plain dumb.

It was not until the second nurse who attended to the so-called "patient zero" in Dallas contracted Ebola that the president appeared to become actively engaged by cancelling a fundraiser and assembling his cabinet for an emergency meeting.

Of course, by that time the fear of having possibly contracted the virus was not just limited to family and friends of the first Dallas patients. It had spread to folks who flew on an airplane or traveled in various airports -- exactly the type of unnecessary fear and chaos everyone had hoped to avoid.

This is a type of chaos that emerges from benign neglect of vital issues in favor of those that meet a certain social or political agenda. It is doing real damage, at home and abroad.