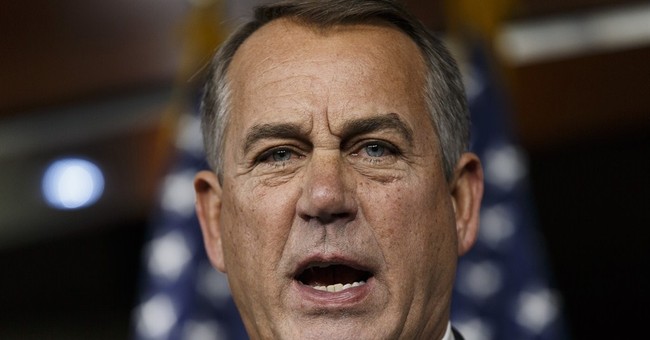 We've been waiting for this moment to arrive for some time. Now it is upon us, and neither the Republicans in Washington nor investors in Wall Street really want to talk about it.

It's time to raise the nation's debt ceiling.

For Republicans, particularly in the fracture GOP House conference, we have heard muted noises, but little real guidance as to whether they will demand anything from President Obama in exchange for once again allowing the limit on the federal debt to be raised. They know the president will refuse to negotiate with them.

After the GOP shutdown the government for a brief period of time last year, endless polls were produced to somehow show that the public blamed Republicans for the shutdown. Ironically, when it started, some polls showed more Americans blaming Obama. That quickly shifted to basically equal blame for Republicans in Congress and the president.

And after the media got to work on the matter, polls soon started putting the blame on Republicans alone. Had the president's own disastrous web launch of Obamacare not commenced at the same time, the press would have ridden the GOP shutdown until it was beaten to the ground.

Lost in all of the news blur was the fact that most economic indicators revealed that the shutdown of government had little if any impact on the economy. That seems lost on everyone, including the weak-kneed Republican establishment that cringes at the mere thought of a meaningful showdown with President Obama.

Instead, House members have been wringing their hands, trying to decide what, if anything, they will ask of a president who in his own State of the Union address made it clear that he will ignore them and, whenever possible, will govern by fiat.

Oh, they have considered ideas such as asking for concessions over the Keystone Pipeline, a muddle-headed idea if ever there was one. We are just now learning that our nation is in its best shape in years in regard to access to oil and energy, so do we want to bring things to a halt over an issue that less than 20 percent of Americans even remotely understand? So inside the beltway in thinking. So special interest. So stupid.

How about this one, Congress? Why not take the one thing the entire nation fears or despises and take a stand on it? Why not demand an end to this absurd Affordable Care Act, leaving only the portions for preexisting conditions and older kids on their parents' insurance years intact. Those are the only two parts of Obamacare that get any approval from anyone, including most Democrats.

But no. These Republicans are facing reelection, and we all know that being reelected is far more important to them than having a showdown with President Obama of real substance,

And even if the Republicans in the House, who have a majority mainly because of all the hot air they bellowed out in 2010 about taking just such bold actions, were to actually do so, they would cause panic.

That's because Wall Street is about as in touch with the real world as Dick Nixon in his months in office. The economy is still sputtering, and the average bloke hasn't felt any real extra coin in his pocket. But, hey, this market is bulletproof and should just keep charging like a bull, right?

What would all those silk-stocking experts on Wall Street do if those unwashed and ghastly conservatives in Congress stood up to President Obama and refused to raise the debt ceiling? We all know that S&P had the nerve to downgrade U.S. credit a few years back, and look what the Obama Justice Department is doing to them. And heavens forbid the markets get spooked for a few weeks and stocks fall to where they should be versus their overvalued current status. Wall Street would shriek.

We will find out if the GOP that won the House in 2010 still has any courage in the next few weeks. But I'm betting on the silk-stocking crowd and the president who sees only his perfect reflection in the mirror. And the debt just keeps on growing.