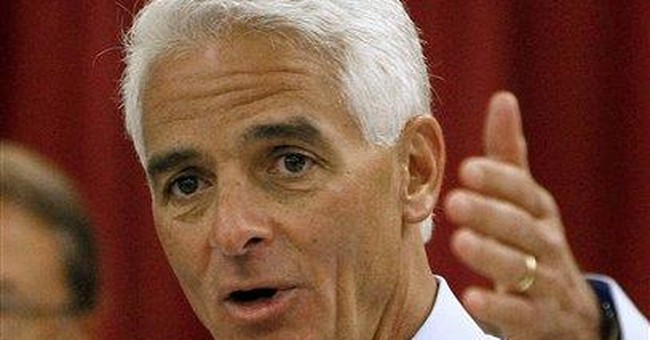 Over a week ago, I reported in the Southern Political Report, a DC-based political Website, that Republican Florida Gov. Charlie Crist definitely would run for U.S. Senate as an independent.

Many had speculated the same, but no one else in the media that I know of said it was a done deal. Yet most observers have understood for a while that with GOP luminaries endorsing former Florida House Speaker Marco Rubio for the Republican nomination, it would prove nearly impossible for Crist to climb out of his enormous polling deficit to win the GOP primary. Interestingly, the concept of independent candidacies this year isn't confined to Florida. Georgia voters in November will select a replacement for term-limited Republican Gov. Sonny Perdue. In that race, a successful businessman with no previous political resume has vowed to plunk down $2 million of his own money. At first, he said he'd run as a Republican -- but he changed his mind when he discovered that he had to sign a loyalty oath in which he'd pledge to support the party and its slate of candidates. Now he may run as an independent.

In Britain, a quickly tumbling Labor Party and a lifeless Conservative Party are now facing a serious challenge from a third party. It's led by a dynamic rising star, Nick Clegg, who took command of the first major televised debate among the candidates.

We all know this will be a topsy-turvy political year. As I study my polling from across America, it appears that voter turnout is going to be very brisk, especially in Republican primaries.

As for Crist, the necessity of his running as an independent was less because of circumstances beyond his control and more a matter of his own making. When the Tea Party movement first emerged about a year ago, Crist failed to understand its significance.

Potentially, he could have leveraged it to try to recapture support from the Florida GOP's conservative wing. And in the last weeks, he could have made a comeback attempt to win at least some of that vote by signing a bill that, among other things, would have provided more latitude to reward effective schoolteachers and to cull the bad ones. That was the moment of permanent separation between Crist and the Republicans.

Some polls have indicated that Crist as an independent candidate for Senate is at least within striking distance of perceived frontrunner Rubio -- and may be ahead of him. But the ultimate outcome, as in Britain, likely will depend on voter intensity.

Crist will have to find a way to persuade moderate Republicans and Democrats to form a coalition of voters willing to support an independent. But again, such a coalition will do him no good unless it is as highly motivated to go to the polls as Rubio's supporters appear to be. Similarly in Britain, it's hard to gauge whether the moxie of independent candidate Clegg and his party will translate into out-and-out electoral victory.

No one knows where the economy or the mood of the American public will be come November. If the British election is any indication, the advantage stateside may go to the candidates who can turn political traditions on their ear. In Florida, few are betting on Democrat Kendrick Meek in the Senate race. The question is whether Rubio can spring to victory with his cinematic good looks, eloquence and understanding of the heart of his party -- or whether he somehow will veer in a direction that scares moderate voters into the arms of Crist.