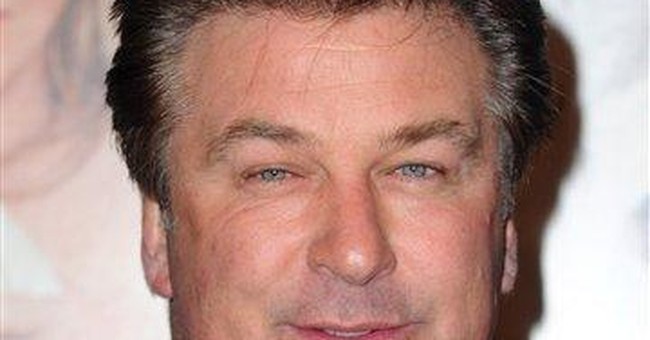 Go ahead and throw mud at me. Kick me. Call me a Republican In Name Only. I don't care. This time, I'm siding with Alec Baldwin.

The actor and liberal activist (and loud "vocalist") recently was rushed to a New York City hospital. It seems that his 14-year-old daughter, Ireland, phoned 911 and said Baldwin was in bad shape and may have suffered an overdose of some sort.

There's just this hitch: Ireland wasn't with Baldwin when she phoned the authorities. She wasn't even in New York. She was in Los Angeles. Apparently, she had been squabbling with dad on the phone, and he hung up. When she called back, Baldwin didn't answer. She may have contacted 911 out of concern, or she may have done it at the urging of her mother, Kim Basinger. The latter is what Baldwin claims, according to some media reports. Baldwin and Basinger don't get along, to say the least.

Fans of celebrity gossip may recall a few years back when a nasty voicemail that Baldwin left his daughter was leaked to media. The message had harsh words for actress Basinger and for Ireland, whom Baldwin called a "rude, thoughtless little pig."

The problem I have with all of this is that it's none of our business what transpires between Baldwin and his teen daughter. To my conservative friends, I say yes, we don't like the guy's politics. But we also stand for basic liberties and decency, including the right to privacy, not to mention respect for our elders.

I'm presuming with a fair amount of confidence that Ireland may have deserved a rebuke from dad somewhere along the line. Most of us can recall a time or two in our youth when one or both parents threw a fit over something we'd done. It's just that, unlike Baldwin, our parents' tirade didn't go viral because of celebrity media. I'm not defending Baldwin's choice of words in regard to his offspring. I'm defending the right of a father to discipline his child, particularly if they're being mean or disrespectful.

In my day, parental discipline wasn't confined to a rebuke like, "Matt, you're a rude, thoughtless little pig." I would have gladly settled for that! Instead, I was more likely to find one of my parents' hands -- or a branch from a tree in the yard -- colliding with my backside. I have loving parents, and it only took me a few encounters of such punishment to put me on the straight and narrow.

Anyone who has watched Baldwin's hit TV show "30 Rock" will have to admit it's funny. And my guess is that he and Steve Martin will, as hosts of the upcoming Academy Awards, make the presentation of the Oscars one of the best in years.

Okay, so Baldwin is a bleeding-heart liberal -- and unabashedly self-righteous about it, too. But the way I look at it, as an actor, he is so unqualified to give opinions about politics that I think we really should care less what he says one way or the other. So when you write me your hate letters from around the nation, please understand that I do get it.

But what we are talking about here are issues of family, privacy and the potential manipulation of a child against a parent. Ireland may have meant well, or she may have been getting a measure of cheap revenge for herself or her mother. We just don't know, and my point is that we don't have the right to know. Do we no longer have enough respect to allow everyone the right to live his or her own life? What if this had happened not to "liberal" Baldwin, but instead to you or your children? My guess is that you wouldn't like it, either.

Princess Diana died when paparazzi chased her as she was being chauffeured by a drunken security agent. Enough is enough. I'm sick of hearing about celebrity missteps, particularly when they involve children.

No, I won't be voting for Alec Baldwin for president. But I will keep watching "30 Rock" with great pleasure. And don't worry, Mr. Baldwin. Whatever your politics, you as a parent should be in charge of your kids. That's what most Americans believe. It's an issue that's not liberal and not conservative. It's just common sense.