GOP Return to Power Could Be Swift 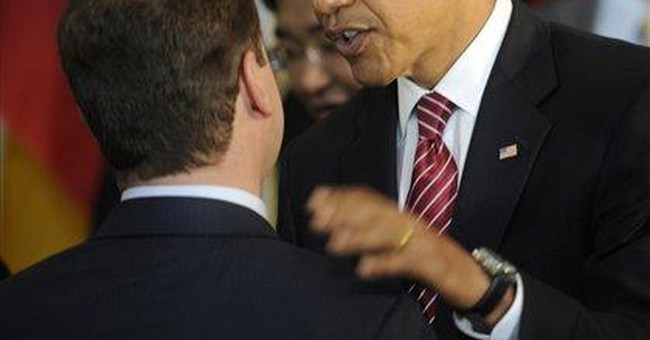 The D.C. pundits think they have it nailed. Sure President Obama and the Democrats have slipped from their mighty post-election high approval ratings. But the Republicans have no message and no candidates, and are a party that has allowed itself to become marginalized because of an over-reliance on the support of Southern whites.

For starters, no Republican has a prayer of capturing the White House without running the table of some large Southern states. Florida, Virginia and North Carolina all went for George W. Bush in 2004 and then for Barack Obama four years later. Recapture these states, and a Republican nominee is halfway to winning in 2012. So dismissing the importance of Southern support for the GOP is misguided analysis. The region is their base, and no party wins without first holding its base.

Next consider states such as Nevada, Colorado and New Mexico. They are less populated than the Southern states just mentioned. If they all go Republican in 2012, however, their cumulative electoral impact could make the presidential race highly competitive. Then the battle for the great swing state of Ohio begins. Suddenly the race is up for grabs, and the supposed marginalized "party of Southerners" grows viable again.

Another false charge is that the Republicans have no message. None other than Bill Clinton dismisses that thinking. In a recent interview with NewsMax CEO Christopher Ruddy, the ex-president in essence said that there are scenarios in which the GOP could retake the presidency in 2012.

Clinton admitted that his own health care reform efforts as president played a role in the Republicans' taking of Congress in 1994. And I'll add that no opposition policies the Republicans had that year compare with the assortment of potential policy missteps the Obama administration and the congressional Democrats have already "given" to the GOP in a matter of months.

Yet Clinton attributes more of the Republicans' 1994 success to the GOP's "Contract With America" than to any of his own mistakes. He in fact credits his White House with implementing some of the better parts of the Contract. Would you expect him to say otherwise?

Clinton's point (and mine over the years) is that ideas carry weight -- and elections. But ideas don't always have to mean new government programs. They can also mean reductions, eliminations, restrictions and limitations. Current polling suggests that Republican candidates that run on a platform of "less is more" won't necessarily be seen as being negative, but rather as constructive. Less spending, less interference with the free-market economy, and fewer new White House advisors and "czars" -- those are some of the ideas that might make a solid platform from which a Republican might launch a successful campaign for president in 2012.

Another swipe at the GOP is that it has no new faces or fresh blood to enter the political arena. That's off-base too. Early polling shows that former Arkansas Gov. Mike Huckabee is a likeable new player in GOP politics. And then there is the intense support for former vice presidential nominee Sarah Palin. That breadth and sustainability of that deep support is hard to quantify right now, but Palin can hardly be dismissed, as some pundits do.

Also telling for Republican voting trends going forward were the results of a lightly publicized special election for state Senate in Florida earlier this month. (I wrote about it in a recent column.) The Democrats put forth no viable candidate in the race, so the race was effectively decided in the Republican primary.

Thanks in large part to a voter turnout that was nearly twice as high as expected in this northeast Florida primary, it was the veteran ex-speaker of the state House who won by a fairly decisive margin. He bested a relative newcomer candidate whose best-known political ties were to the recent "Tea Party" efforts, and to those within that movement who are generally anti-tax, pro-business voters.

He finished ahead of other candidates who had previously held elective office. That's important in this conservative area of a bellwether state for conservatives. It showed that "Tea Party Republicans" can be a force. But it also showed that these voters want elected officials with experience.

This stands to reason when you consider that many Americans say in public opinion polls that they are concerned about the lack of experience of President Obama and of many working in his White House. People want a workable mix of ideology and experience in their leaders. That should be good news to Republicans like Mitt Romney and Newt Gingrich.

Above all, this much is near-certain: Current trends tell us that the Republican Party's best chance to regain power is to put forth the philosophy that elevated the GOP starting with the rise of Ronald Reagan, and that somehow got lost in the George W. Bush years: to the greatest extent possible, keep government out of our lives.