Shut Up and Lead 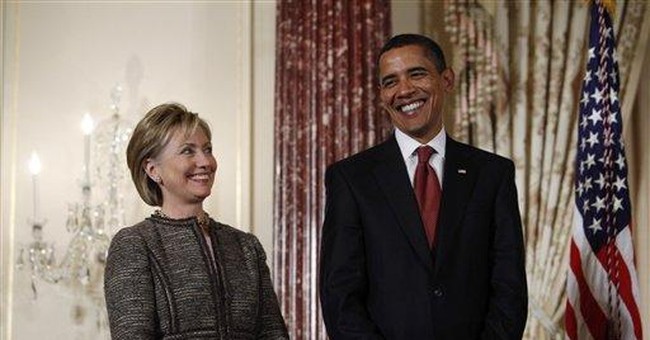 I'm already weary of members of the Republican Party and other conservatives doing little else but throwing rocks at the new Obama administration. And that's coming from someone who helped build the party before many of today's pundits were learning to speak.

Barack Obama is president. Get over it, and start coming up with new ideas and counter-ideas of your own, instead of making hateful or smart-alecky remarks just to sell books or attract attention.

Take Joe Lowery as a subject of right-wing grievance. (I've known him for years, and he has actually helped Republican candidates on many occasions.) As part of the inauguration's benediction, Lowery recited an out-of-date and out-of-step little ditty from the civil rights days. Part of it dismissed whites as morally lacking.

So what? He's in his late 80s and isn't representative of anything but the past.

And the fact that President Obama had to retake the oath of office because the Chief Justice messed it up is interesting, but only that. It doesn't stand up to a claim that the Obama presidency is somehow illegitimate.

Listen up, Republicans and conservatives: Your party and your movement only rise when they produce new ideas. Ronald Reagan did it in 1980 with his approaches to things like taxation and fighting the Cold War with the Soviet Union.

And the Republicans who took over Congress in 1994 did so by unveiling a specific litany of government reforms.

By way of practicing what I preach -- however navely or haltingly -- allow me to outline the rudiments of a free-market approach to start getting us out of this economic slough we are in. This idea might at least help make a dent in the bailing out of our financial institutions without simply throwing good money after bad.

Start with a simple premise: We know that beautiful foreclosed homes in places like, say, Florida have subsequently been marked down in value (and by using an idiotic accounting method, but never mind).

Knowing that someday their full values will return, wouldn't you love to be able to buy some of those homes at dirt-cheap prices, and simply wait for their values to return or even appreciate? Ditto for strip malls, office complexes, hotels, and on and on.

The obvious problem, of course, is that most people in America don't have the resources to afford big bargains during this down time.

But now ask yourself this: Would you rather invest in a big-name company that could see its value plummet, or in a collection of assets that have reached rock bottom, but were once quite valuable?

Clear and simple, there'd be little downside and much potential in waiting for the windfall of these assets to return to value.

And now my idea: Why should these billions of dollars of allegedly bad loans, tied to greatly diminished assets held by financial institutions, be purchased by our tax money rather than by a public eager to someday reap potential financial rewards?

In most past recessions, the bounceback on assets -- often long-delayed -- can be in the double-digit percentiles. Would you not buy a "share of stock" in the "corporation" holding these assets? Maybe 100 shares? Perhaps many more if there was liquidity to spare?

I sure would, and in part because, just like during World War II with war bonds, I would be investing in helping to fund a fight that is critical to our nation's survival.

Equally important, I realize that I'm going to fund it anyway, if only through tax payments that I will never see again.

I think I'd rather pitch in for Uncle Sam by having the opportunity to see the "corporation" holding these assets gain substantial value in future years.

This proposal probably has a million holes in it. Readers, feel free to help me find them.

But let's at least get a dialogue going. Throwing rocks at a president with a 70 percent approval rating won't get America's entrepreneurial engines running again. Let's leave the venom to those who make their living milking it from their own fangs.