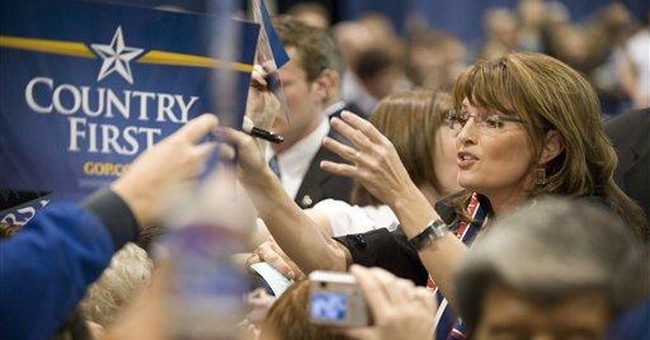 I've seen this happen once or twice: a complete meltdown of the Republican Party. It starts as an uphill year looking tougher by the day. It ends like a load of bricks falling on the GOP's head.

There's one word that describes the reason for the rubble that likely will be on the Republicans' heads come Nov. 4 -- arrogance.

The fish rots from the head. And I'm not talking about the well-intentioned John McCain, this year's winner of the "Bob Dole Sacrificial Lamb" award. (Dole was allowed by his major party mates to go quietly into that good night in the 1996 presidential election against Bill Clinton.)

Instead I mean George W. Bush, and more importantly, those who served his administration by cajoling, misleading and betraying him. They transformed him into what came to look like a cocky buffoon. They encouraged a good man to self-destruct.

Now Bush has been abandoned by these hacks. He's left to confront a major monetary crisis and the remnants of a war. They built him up and let the world tear him apart as his own hubris blinded him to the facts of the situation.

Left behind is an amateurish House of Representatives, whose silly minority conference appears not only out of sync with their presidential candidate, but with reality. Get a grip, guys: You may get reelected because no one had the sense to take you on, but you are as out-of-step as the Democrats you fought so hard to replace just 14 years ago.

Then there's the Senate. It would be hard to find a collection of folks more suited for silk slippers and ermine robes. Yes, senators were often prima donnas in my Senate staff years of the 1980s. (Fortunately, my boss wasn't one of them.) And Democrats then could be just as bad. A more bizarre and imperious creature than Sen. Robert Byrd of West Virginia was impossible to find back then.

Conservatives today are frustrated that America appears ready to elect an untested and liberal newcomer, Barack Obama; and to do it with issues still looming about his past political beliefs and associations.

Voters aren't rejecting conservative values this year. They just don't know what they are. All they know is that they can't stand the inarticulate, pompous bunch that now speaks for and represents the Republican and conservative causes.

Although McCain has more experience in his little pinky than Obama does in his whole body, McCain likely never had a prayer this year. Most of this humdrum bunch of Republican elected officials never liked him much in the first place. Moreover, because of a basic inability to develop a message that would truly resonate with the public, McCain has been successfully portrayed as the third version of George W. Bush.

I've told readers before that in 1980, the national Republican establishment despised Ronald Reagan. But I've neglected to point out that until he and Jimmy Carter debated on national television rather late in the campaign, Carter was leading in most polls by nearly double digits.

What changed so quickly? It was simple. Republicans and swing-voting Democrats and Independents watched the debate and heard a man, Reagan, with a new message; one that they could see that he really believed in. They knew somehow he was a man on a mission -- a mission for them, not for himself.

What will the Republican Parry need to do if Nov. 4 turns into the sort of repudiation that puts comedians like Al Franken in the U.S. Senate and gives so-called "Red States" over to Barack Obama?

Clean house. Every last Republican elected official should consider whether they have stayed in politics so long as to become a mirror of what they sought to replace. Fresh, new candidates will have to find the courage to challenge Republican incumbents in primaries, with the hope being that the dinosaurs of the party won't have the energy to fight for another in a long succession of terms of elected positions.

Sarah Palin may have been a mistake as far as giving an already edgy electorate the idea that the Republicans could not provide effective leadership in the tough times to come. But make no mistake: Palin and the many others like her who have yet to emerge are the future of the GOP. It's not Palin's ideology that energizes the party and captivates the interest of the rest of the nation. It's her humanity.

Let the house of cards collapse. Torch the gilded thrones. Let the Potomac Fever break into a cold sweat. Then the GOP can rebuild its whole party. Trust me, nothing can be more fun or rewarding than having a cause greater than one's own personal political greed.