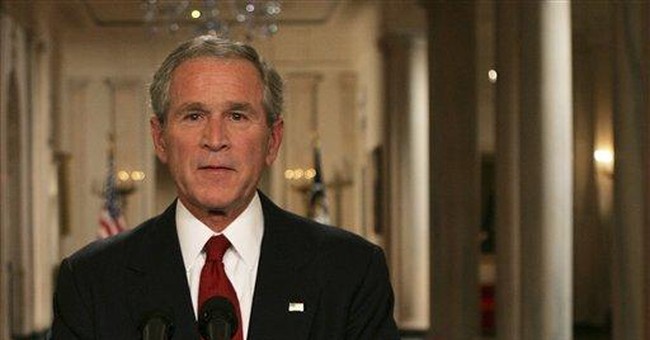 In politics, timing is everything.

Don't you think that in quiet places where they can't be heard, there aren't some involved in the 2008 political race who aren't whispering aloud questions about whether the almost whirlwind speed at which the entire financial market has melted down seems more than coincidental? Would they be guilty of unjustified paranoia -- or would they be justified in at least pondering the issue?

Oh, I forgot. When conservatives or Republicans -- or even members of the Clinton family -- dare to suggest that there might be some mischief afoot, or that some unacknowledged media, political or business leaders might have it out for them, they're just being paranoid whiners. But when liberals or some Democrats suggest that there exists an automatic anti-black vote in America, or that electronic voting machines are designed to take races away from their candidates, that's just healthy discussion -- or plain facts. Right?

In covering and polling this presidential race since its first flickers, I've noticed a lot of really weird and inexplicable things taking place. I watched the Democratic Party's national establishment do everything within its power to knock Hillary Clinton out of her party's nomination. I witnessed John McCain resurrect himself from the political dead and, using the most unlikely of candidates, former Arkansas Gov. Mike Huckabee as a political blocker, manage to hijack conservative votes from candidates such as former Massachusetts Gov. Mitt Romney. This split them into enough camps to allow McCain's more moderate supporters to vault him to the nomination.

You don't think Romney and the conservatives didn't wonder how all of this happened? You don't think Hillary and Bill don't still believe that the Northeast Democratic establishment had it in for them from the start? Whether or not events are the result of coincidence or some grand plan, it's only human nature to ask the question, "Who really did this to me?"

That brings us to the most amazing and perplexing happening in the entire 2008 presidential race.

As early as March 2006, I was writing that the roaring housing market was likely to collapse and bring down financial institutions with it. Now if I could see that coming, you'd think those far more gifted than I in Washington, D.C. or on Wall Street would have seen it, too.

Like most everyone and his uncle, I've been writing a book on this crazy election. Mine is called "Paranoid Nation: The Real Story of The 2008 Fight For The Presidency." The book went on sale on Amazon, of all things, during this week of historic economic news, and even as I'm preparing the final chapters about the last days of the campaign. Now more than ever am I glad I chose this title!

John McCain and the Republicans have to be wondering why the safe haven for investment bank customers known as "auction rate securities," which had auctioned off and were treated as safe as money markets for ages, suddenly started to fail to find any takers earlier this year.

Surely they question why it is that the giant disasters known as Fannie and Freddie reached their moment of darkness with just seven weeks to go in the election. One would think that conservatives and Republicans are scratching their heads wondering who was shorting the stocks of critical investment houses and causing widespread panic over the liquidity of everything from pension plans to simple money market accounts, and all in a matter of a week.

Now we are down to a $700 billion bailout that is, for McCain and the Republicans, like the Salem witch trials. If you are innocent, you drown, if you are guilty, they burn you at the stake.

Newt Gingrich says that if McCain votes for the so-called "Bush bailout" bill to keep financial institutions solvent, he will guarantee his defeat. Based on how many conservatives feel about the bill, that may well be true. So there's the "drowning if you're innocent" part of McCain's ordeal.

If the Bush proposal fails to pass, then panic is likely to hit Wall Street, leaving banks and financial institutions with little working capital; and likely leading to one of the worst economic crises most of us have ever witnessed. That is where McCain gets burned at the stake.

As is often the case, this entire disaster is likely a combination of strange coincidences, greed and total ineptitude on the part of leaders in government and finance. But we do know that the FBI now wants some answers about these matters as well.

Oh, and I couldn't help but notice that the most astute of Obama supporters, the "Sage of Omaha," Warren Buffett, was ready and willing to scoop up at a fire-sale discount a good portion of Goldman Sachs. Is he really just a sage?