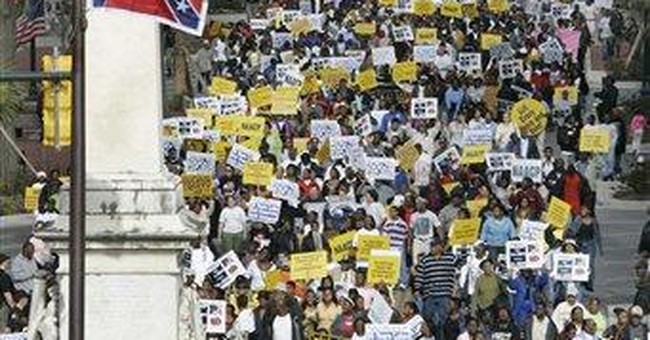 The cover story in this week's Newsweek is entitled "The End of the South." Some of the story's observations ring true enough. Yet the tone of the piece, and its accompanying photos, paint an oversimplified "black and white" portrait of a land that is actually -- like most everywhere else -- a colorful mix of the flattering and the not-so flattering.

The main piece was written by award-winning writer Christopher Dickey, the son of the late, famed poet and novelist James Dickey, he of "Deliverance" fame.

Christopher Dickey is gifted. But the glasses with which he chose to view his native land for this article were tinted with preconceptions. His knowledge of the modern South and its politics is limited.

A quick check of his bio bears out my take on him. Dickey has served as the bureau chief for Newsweek in Paris (the one in France, not Texas). He's served previously at scattered news bureaus across the word.

It's likely that Dickey's view of how to evaluate the politics and people of the South in 2008 is something akin to how I might report on England today after having lived there 24 years ago. My compass for even attempting a directional read on the place would be dysfunctional.

Dickey's thesis, like most stereotypes, is partly true. The South is a region in transition. Sometimes turbulently so.

What's unsettling about the Newsweek piece is its failure to properly recognize that that much of the population along Dickey's sojourn -- the Carolinas, Tennessee and Georgia -- is concentrated largely in suburban and exurban areas. The demographic makeup of these concentrations of people are made up, sometimes overwhelmingly, by those originally from places north and west of "Dixie"; often young people, who know little about the Civil War, or about the civil rights, and care even less.

Yet many of the article's anecdotes center on the politics or the daily lives of people in rural parts of the South, who are an increasingly insignificant part of the whole population.

Dickey writes that, "People [here] remember what they want and call it history. That much is true almost any place in the world. But in the South, if people aren't careful, history can start to run their lives, even put them at risk." Huh?

Actually that passage is the set-up for a story he relates about his father's late brother, who kept a large collection of Civil War artillery in his basement.

Dickey misfires when he paints the impression that a lot of Southerners are obsessed about the Civil War. The fact is that most have little knowledge of or interest in that titanic, formative conflict of American history. Most simply don't give a hang; it has no relevance to their everyday lives. So what if he sniffed out some fringe group in rural Georgia who reenact Civil War battles? That scene hardly is representative of most people in Georgia, or anywhere else in the region.

Beyond Dickey's selective cultural observation, the photos chosen to accompany the article are wildly out of proportion to reality. They include a faded sign in the woods that says "Jesus Saves Vote"; a room full of bigoted collectibles such as KKK hoods and the old Georgia flag with its Confederate battle emblem; and a rundown store that is likely abandoned.

But my favorite was a snapshot of people watching a movie at a "drive-in" theater. What a hoot! At most, there are a handful of drive-ins in the state where that image was taken; and most of them were built at expensive mountain resorts as "retro" cool places for wealthy urbanites who want to get away for the weekend.

Why does all of this matter? As the CEO of a company that owns the well-respected D.C.-based Southern Political Report, we like to think we know our Southern politics.

Let's face it: The upshot of this article was to paint the South as a region struggling to emerge from a Civil War and civil rights obsession. A place where an African-American candidate for office -- Barack Obama -- can't win white votes.

Yet our most recent InsiderAdvantage survey of the presidential race in one of the states on which Dickey writes proves him dead wrong in his assumption that Obama has no chance to gain white support.

CNN exit polls show that John Kerry, a white Democrat, carried 23 percent of the white vote in Georgia in 2004. Obama already polls 23 percent among white voters there, and there are still a lot of undecided whites still to make up their minds. Where is this "history laden" barrier for Obama?"