Will Bob Barr Fly or Flop As A Factor In The Presidential Race? 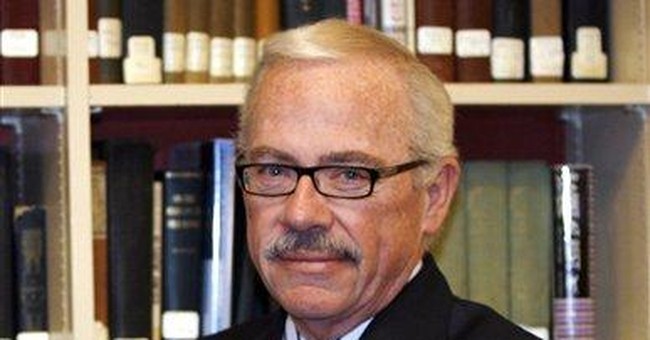 Many folks don't even know who Bob Barr is, much less that he is running for president as the Libertarian nominee. The question is whether enough people will come to know the former Republican congressman by November to allow Barr's candidacy to really matter.

In many ways it's in Barr's hands whether he ends up becoming a material factor.

The former Georgia congressman, who led the fight to impeach and remove Bill Clinton from office in the late 1990s, will undoubtedly have a hard time raising enough money to have a legitimate shot at winning more than the typical one-to-two percent level that Libertarian candidates usually receive in presidential contests.

And if Barr is running simply to get free airtime on TV networks, or to have another 15 minutes of fame, then he can hang it up -- he will indeed be irrelevant.

Right now he's fighting to get his name on the Oklahoma ballot. That's one of the few states that make it hard for even the Libertarians to sneak in as a third party. Trouble is, his ballot fight is earning no press. If Barr wastes more than a modest sum in this effort, he may end up not even being a footnote in the history of the 2008 presidential race.

But Barr does have some things going for him. If he takes advantage of them, he could yet toss a huge monkey wrench into the contest.

One thing that many political pundits have yet to grasp is the presence of a small but powerful group of voters who consider themselves conservatives, but who believe President Bush and his administration have betrayed them. They also refuse to embrace John McCain, either because they view him as too liberal or, alternatively, as more Bush-like than they can stomach.

This voting bloc feels that Congress and the president blinked on meaty immigration reform; that they allowed U.S. monetary policy to centrifugally scatter willy-nilly in all directions; and that they have trashed basic constitutional liberties in the pursuit of phantom foreign enemies.

Many of them voted for Ron Paul, who admittedly did not meet the electoral expectations of his followers in the presidential nomination process. Or did he?

If one goes back and looks at the earliest of contests, Iowa and New Hampshire, an argument can be made that Paul's performance was strong enough to kill off any chance that either Mitt Romney or Fred Thompson ever had. In Iowa, Paul's 10 percent of the vote could easily have gone to either Romney or Thompson, or both if Paul had stayed out, allowing their campaigns to appear stronger going into New Hampshire.

And by the time of the New Hampshire primary, Paul was still polling just less than 10 percent. That performance basically sank Thompson. Had Paul been missing from the race and his supporters gotten behind Romney, then John McCain might not be the presumptive nominee today. While many in the media wrote Ron Paul off, his impact on the GOP election was immense.

Barr hopes to capture at least some of that Ron Paul vote. He won't get all of it. Much of Paul's support came from voters passionately identifying with Paul the man, and not just with some abstract, anti-establishment cause.

But if Barr concentrates his message of less government, increased personal privacy and an overall disdain for the all-too-stale GOP of 2008; if he focuses on the handful of states where his message might be well-received; and if TV media markets aren't prohibitively expensive for his campaign's war chest, then the possibly resulting four-to-six percent Barr showing could make all the difference in the world for influencing the final outcome of the presidential race.

An obvious example is his home state of Georgia. There, Barr will have to conduct an intense, targeted campaign to actually win the six percent or so that most polls show him getting right now. And the Atlanta TV market, ninth largest in the nation, is pricey.

But just an hour or so away sits Alabama. TV is cheaper there, and there are plenty of conservatives who are less than thrilled with John McCain. Throw in a decent campaign effort in North Carolina and several Western states, including, of all places, Alaska. Then add to the mix the few states that award electoral votes proportionately, and suddenly, Bob Barr could have the same impact on John McCain in 2008 that Ross Perot had on President Bush 41 in 1992.

It's really up to Barr. Will he run a smart campaign that doesn't attempt to eat the whole elephant, or will he try for "superstar" status and end up having no impact at all?