Federal Cash Cow Out of Milk 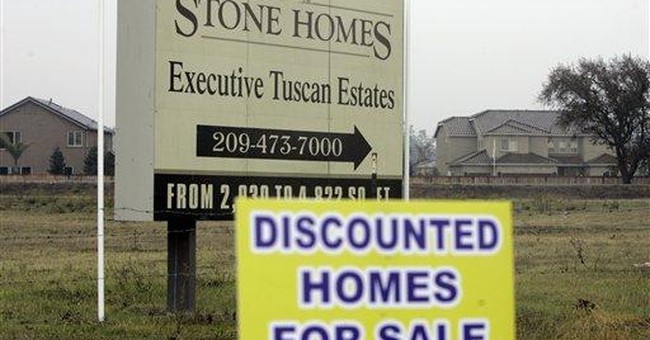 While reviewing an archive of my past Creators Syndicate columns for another project I'm working on, I discovered this from a Florida Times-Union clipping from about two years ago:

"Don't look now, but America's housing market is on the edge of a precipice. More ominous still is that it's not just the houses themselves that are a concern...The financial foundations may not be able to bear the weight of their debt."

Believe me, I don't want any reward for having been on to something ahead of most of my national colleagues. And -- naturally -- I found a column just weeks later in which I wrote that President Bush wasn't doing so bad! So I'm not bragging. In fact, I'm scared to death.

This week, the federal government went back to its same old playbook and pumped $280 billion into the financial community to create instant additional liquidity. Only now are we learning that many analysts suspect that the move was made to rescue a specific major financial institution that might have been on the brink of insolvency.

The last time I wrote about the government's practice of simply pumping more dollars into the market to prop up the economy, I sounded to some like one of those conspiratorial types who believes a handful of individuals run the world and that we should all have gold buried in our backyard.

Well, boot the "conspiracy nut" labels. Let me cite the Times of London's online edition of March 13, 2008. It quotes an analyst on the failure of the latest cash infusion to lift the stock market beyond a one-day bounce. The analyst, fearful that at least one or more major financial institutions will go under, says that maybe a standard playbook answer is no longer an option. "The Fed just can't keep printing money," he wrote.

Coming from a family that was for decades in the printing and publishing business, I can tell you that it is an amazing sight to look down a row of massive presses all operating at one time. The noise is awesome. The smell is one that only a person with ink in their veins could love. For me, seeing such a sight meant that we were making money. The value of whatever came off that press, be it a corporate annual report or an ad campaign for a retailer, had value because it was backed up by the dollars we would be paid for producing the product.

But imagine that you are standing watching rows of presses, some as long as a house, printing not books or catalogues or advertisements, but dollars. Just as in the world of commercial printing, the price of the product being printed goes down with each additional unit you print.

After you get past the many processes necessary to prepare the press, the biggest cost that remains is that of time and paper. That's what makes the cost of the product decline.

Similarly, the dollar is declining today. And the idea that we -- our government -- is printing on more paper and more ink doesn't give me the same happy feeling I had when it was a commercial printing product being cheaply replicated, for which my company would be paid dollars.

No, instead we are talking about the very "thing" of value to us, the dollar bill itself. It's being stretched to such a long run that its cost -- or in this case, its value -- per unit is dropping like a rock.

This is no longer some far-out discussion of "why we left the gold standard." Our nation is on the verge of a potential 1929 catastrophe; if not immediately, then in the long run.

To have the president not recognize that we are probably in a recession already, and not to recognize that gas prices could be $4 per gallon this summer, is regrettable. But Bush is political toast, and to expect that either he or Vice President Darth Vader will accomplish anything in their remaining months is hopeless.

The answer to this is in our own hands. Whatever idiotic piece of legislation your congressman or senator is working on right now, call them and ask them to put it aside.

We need bipartisan movement quickly on the issue of saving our economy.

The Fed can't keep lowering interest rates because it is not working; it doesn't reach those who need relief. Additionally, with inflation racing up the charts, the cuts will soon result in a reversal of interest-rate hikes. And the absurd concept of sending everyone a one-time check in the mail to "stimulate the economy" will lift things, oh, maybe a week or two.

Meanwhile, they'll just keep on printing money. Including the $40 million-plus it took to mail out notices to Americans, to let them know that their handout from the government will be arriving soon. Keep those presses rolling, boys.

Liberal Blogger Notices Something About Anti-Black Crime in America...And the Woke Will Not Like It
Townhall
Don't? CNN explains how to speak to someone who's hesitant to get vaccinated against COVID-19
Twitchy
Liberal Blogger Notices Stats About Anti-Black Crime Don't Fit the Woke Narrative
Redstate
Trump Vindicated as Judge Rules Michigan Secretary of State Violated Election Laws
PJ Media