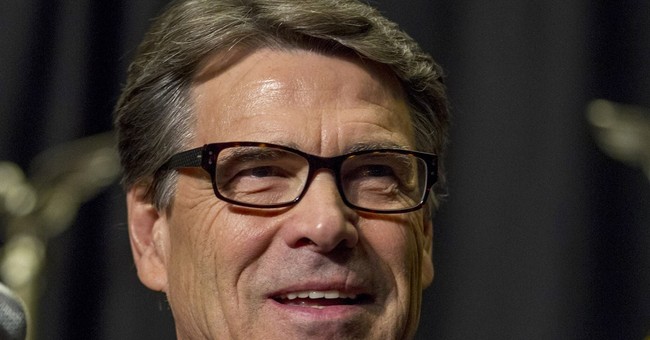 Two Texans may be vying for the Republican presidential nomination in 2016: Sen. Ted Cruz and Governor Rick Perry.

Cruz overwhelmingly won the Texas GOP 2016 convention straw poll, confirming his position as the conservative grassroots candidate. He fires up crowds unlike any other politician today, and the power of motivating voters and volunteers should not be underestimated.

One of his staffers left his office to start a committee to draft him into running. He has visited the early states and spent many weekends during his first 18 months in office raising money for important GOP state and county party organizations. He regularly wins straw polls and is a top fundraising draw across the country.

There is very little downside to Cruz running in 2016. He doesn't face reelection in Texas until 2018. It is clear he is unlikely to work his way up in the U.S. Senate. The longer he stays there, the more he becomes a creature of Washington.

While Cruz's star is rising nationally, the outgoing Perry has been working to rehabilitate his image, by reintroducing himself, demonstrating that he is better prepared to run for President than he was in 2012, and aggressively promoting red state policies in comparison to those in blue states.

Last time he hastily jumped in, unprepared, immediately after serious back surgery. Now, he is building up, and the most powerful advantage he will have is low expectations. The media loves a comeback.

Perry was vetted last time, so old news will be stale. Yes, he will have to acquit himself very well during the presidential debates, but there will be fewer than last time, they will be more controlled, and he will be better prepared.

So can Cruz or Perry win the Republican nomination in 2016?

For Cruz, he will have to vanquish conservative challenger Sen. Rand Paul (R-KY). Sen. Paul has overlapping support with Cruz, and if they both run, they will weaken each other. Sen. Paul is up for reelection in 2016, and so far, has been unable to pass legislation at the state level that would allow him to simultaneously seek both offices, as Vice President Joe Biden did in 2008.

Cruz would need to win several early states to unite the conservative movement behind him. The Republican establishment is scared to death of Cruz as the nominee, because he does not cater to them, he puts conservative principles first, and they believe he is unelectable in a general election.

There is no question that Cruz can win Iowa. He can also win South Carolina. If he wins those two states, he will be one of the two final candidates.

He will need to demonstrate not just that he opposes the Obama agenda, but that he has a positive platform of his own for the future of the country. He will need to somehow assuage concerns about his electability. His ability to withstand attacks may be the most important factor, should he run.

Perry also has a path, although it is narrower.

The space that Perry occupies in the 2016 field is as the electable conservative. To be able to make that argument, he will need to first survive Iowa.

How many tickets are there out of Iowa? Three, maybe four.

Should he survive Iowa, he can win South Carolina too - which would be a must win for him.

Perry could be a finalist for the nomination, and the Republican establishment may eventually rally around him as the kind of candidate that could stop Cruz or Paul from being the nominee.

Keep your eyes on Ted Cruz and Rick Perry. They have as good a chance as anyone of being the Republican nominee for President in 2016.