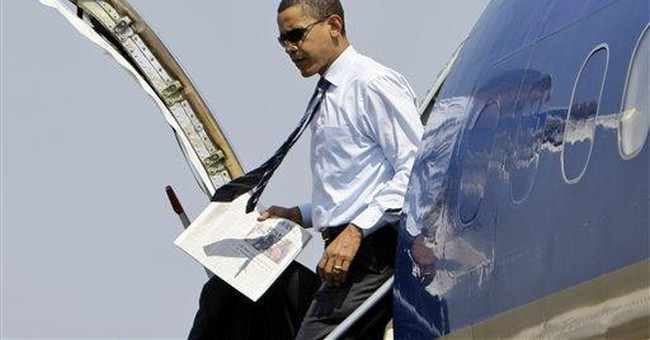 Floyd Brown has angered the Left … again.  Salon calls his recent TV ads about Barack Obama "inflammatory," and refers to him as "right-wing con man."  Such is life for a man who has made a career out of saying what others are afraid to say.  Even McClatchy Newspapers says he's one of the nations "best-known conservative political knife throwers."

Brown is used to it.  As one of the creators of the now-infamous 1988 Willie Horton ads which helped defeat Michael Dukakis, Brown has been a pariah of the Left for twenty years now.  It’s a way of life.

And just like in 1988, today Brown is engaged in an effort to inform the public about how out-of-touch the Democratic nominee for president is.  His new site – ExposeObama.com -- is aimed at leveling the playing field, and informing the public of things which the establishment media might otherwise not get around to discussing.

Some of the controversy, no doubt, stems from Brown's refusal to avoid talking about something that sophisticated people in the chattering classes have decided is off-limits:  “The Muslim issue."

According to Brown:  "I believe that on the Obama (web) site, where he said he was -- quote, N-E-V-E-R -- never -- a Muslim, I believe he was being disingenuous.  In fact, if you followed what he said closely, when he was interviewed by the L.A. Times, he actually hedged and said he was never a 'practicing' Muslim."

Brown accuses the media of avoiding this issue because it is politically incorrect to mention.   But despite the attacks on Brown’s character, his position is more nuanced than you might expect.  He acknowledges that Obama is not a Muslim now, but says the news media has not accurately described the fact that Obama was, in fact, born a Muslim -- and according to Brown, technically speaking, while this is unfamiliar to most Western thought: "that's how you become Muslim.”

So why has this part of Obama’s biography been largely ignored?  "Everybody's afraid of being called a bigot, so the fear factor is so great that everybody runs for cover," he tells me.  Why should we care?  Brown argues that the real issue isn't whether or not Obama is a Muslim -- but that fact that he has lied about it because it is politically expedient to do so.

Of course, Brown isn’t solely focused on Obama’s religion.  His website seeks to educate voters about Obama’s positions on a variety of issues, including abortion, taxes, crime, health care, education, and guns.  The ad he’s currently trying to get on air focuses on Obama’s voting against “expanding the death penalty for gang-related murders.”

When it comes to digging up dirt, Brown believes that the Democratic primary opponent -- in this case, Hillary Clinton – has already provided the best fodder for attacking Obama:

"One of the best places to look for opposition research is to see what the Democratic opponent ... Willie Horton was brought up by Al Gore in the New York debate, and was then later picked up by our independent expenditure, and also picked up extensively in the news media..."  (Note:  While Gore publicly criticized Dukakis’ furlough program during a debate in 1988, he did not specifically cite Willie Horton.)

In 1988, Brown relied on a top-down medium to get his message across.  Today, Brown tells me he wants to start a contest to encourage conservatives online to "write, produce, create -- and hopefully air -- video." Essentially, these would be anti-Obama commercials which would be shared on the internet.  And Brown says he would like to actually air on TV the best ones.

"I used to do it on really high-tech equipment, and now I do it on Final Cut Pro HD,” he tells me.  Brown paid more than $100K to make the Willie Horton ad, now almost anyone can have access to the technology he uses.

So is there a big surprise out there waiting for us?  An Obama-bomb he’s planning to drop in October?? … Most likely, not.  Brown says that most of information that could hurt Obama is probably already known by those who closely follow politics.  This was the case with Willie Horton, by the way.  The insiders knew about Horton, but the general public didn’t know about it.  Ultimately, the significance of Brown's impact will be judged by whether or not he can inform average citizens of things the political junkies already know.  And in this regard, he has a long way to go.

Brown tells me this effort was started late.  His group’s next financial report is expected to show about $600K raised.  This, of course, is not a lot of money in today's politics.  But if they continue raising money -- and then target their ads correctly -- they could have an impact.

While there have been surprisingly few conservative "outside groups" pop-up to challenge Obama, Brown says there are donors and activists out there who are looking for a place to get involved:  "There are a lot of people who don't want Senator Obama elected -- who are not totally thrilled with the McCain campaign -- and we give people a place where they can go and work against Senator Obama -- and still feel totally comfortable as conservatives."

Brown says he has no personal animosity against Obama, but that he is ideologically opposed to him.  He says his effort is about the future direction of the country, plain and simple.  "I think he's just been over-sold -- I don't think he's the messiah people claim he is."