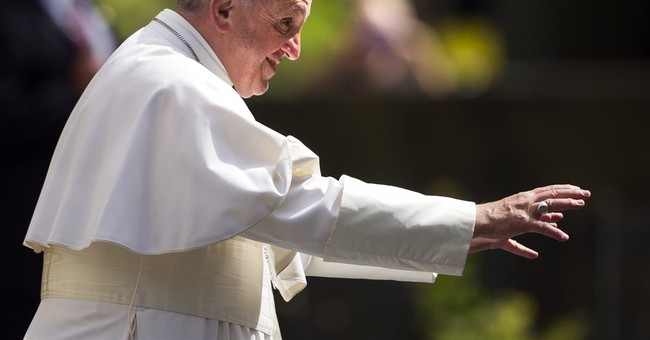 Pope Francis made a startling gesture of support for religious freedom to start his visit to the U.S.

After leaving the White House as a guest of President Obama, he made an unscheduled visit to a group of nuns who are suing members of the president’s cabinet. Francis visited the Washington, D.C., home of the Little Sisters of the Poor, where they offer dignified care to the elderly.

The Little Sisters are one of the most prominent groups challenging Obamacare’s mandate that forces them and many other organizations and families to provide health insurance covering birth control, sterilization, and drugs and devices that can destroy early human embryos.

This was no ordinary visit by a pope to a group of religious sisters. It was the head of the Catholic Church and the Vatican state endorsing his adherents as they sue another head of state—President Obama—whom he had just visited and confronted on the issue of religious freedom. The pope’s likability among many can easily hide the impact of this gesture, and it’s a gesture far more specific and confrontational than he made on any other issue touching American public policy.

To prevent anyone from wondering whether his visit to the home was merely a coincidence, official Vatican spokesman Fr. Federico Lombardi confirmed that it was “obviously” an explicit show of support for the religious freedom litigation against Obamacare.

Those lawsuits are sitting on the desk of the U.S. Supreme Court. The U.S. Court of Appeals for the 10th Circuit combined the Little Sisters’ own case, which the Becket Fund is litigating, with Alliance Defending Freedom’s suit on behalf of Southern Nazarene University and three other Christian colleges from Oklahoma.

These organizations represent the gamut of health insurance plans claiming a violation of their religious beliefs. Supreme Court watchers now widely expect review of these cases due to the U.S. Court of Appeals for the 8th Circuit’s recent ruling that created a judicial disagreement about whether the mandate complies with the Religious Freedom Restoration Act. That case included Dordt College in Iowa and Cornerstone University in Michigan, also ADF clients. The Supreme Court could grant review in late October.

The pope’s action directly rebuts President Obama’s own spin on religious liberty. During the pope’s visit to the White House, the president amazingly claimed he supports religious liberty. He did this despite staking out radical positions not just against the Little Sisters. He has also excluded religious freedom from Church schools and from families earning a living in business—exclusions the Supreme Court then rejected.

White House Spokesperson Josh Earnest was asked a couple of hours after the pope’s remarks how to square the president’s record of religious hostility with his alleged respect for it. Earnest claimed the president is actually respecting the Little Sisters—you know, the sisters who are suing him. Earnest referred to the judges who have ruled in the president’s favor but failed to mention the 8th Circuit’s decision or the dozens of other judges who disagree.

Thus, when the pope proceeded over to the Little Sisters’ doorstep, it removed any doubt about whether the president’s claim of respect for religious liberty is plausible or is consistent with the pope’s position.

The pope’s action is also a quiet rebuke of some left-leaning Catholics and other Christians. They have attacked the lawsuits by the Little Sisters, SNU, and others, and the U.S. Conference of Catholic Bishops’ strong support for them, as being too confrontational. Instead, some have parroted the White House’s spin machine, which says the government gets to decide which mandates violate your conscience and which don’t, and then the government can claim to “respect” religious freedom.

But at the White House, the pope singled out the bishops to support their religious freedom campaign, and specified that overwrought concepts of “discrimination” must not be used to curtail religious liberty in any way. He doubled down on that endorsement by his ad hoc visit to the Little Sisters.

As expected, the pope is also emphasizing protection of the environment during his speeches, and he generally told the president he supports his efforts to reduce air pollution. But the pope didn’t make an unscheduled visit to the Environmental Protection Agency to express support for its defense of lawsuits that are trying to shut down coal companies and CO2 production. The pope did visit a religious group that is being coerced under Obamacare and has gone to court against the administration to protect religious freedom—optics that the president and the rest of the Left would prefer to ignore.