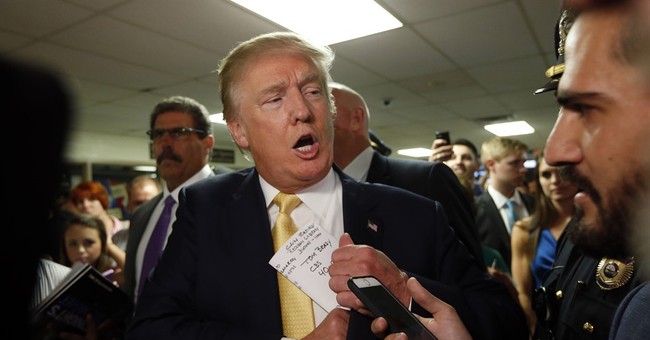 Full disclosure: As goes election 2016, I’m decidedly not in the Donald Trump camp. To compare Trump to Ronald Reagan, as some have done, is like comparing a Hostess Ding Dong to a seven course meal at Osteria Francescana. Though each may please the palate, the latter offers both substance and sustenance, while the former, a quick endorphin fix and empty calories.

Trump is no conservative. He’s a big-government, tax-and-spend liberal who has spent most his life supporting Democrats and Democratic causes. Mr. Trump’s moral compass lacks due north. Its needle spins faster than Hillary Clinton on a Tilt-A-Whirl. Donald Trump believes what Donald Trump believes because he’s Donald Trump – not because what he believes has any basis in fact.

Like many liberals, the Donald is prone to engage in the ad hominem attack when pushed into a corner on questions of substance (e.g., a propensity to mock the physical appearance of his detractors). Such personal insults are shallow, juvenile and, rather than representing a challenge to the dictates of political correctness, show a boorish lack of civility and decorum.

Still, don’t get me wrong. In some ways, and like millions of Americans, I find Trump both endearing and entertaining. I believe his conventional-wisdom-defying rise in the polls can be attributed, primarily, to three things:

First, he’s anti-establishment. The conservative base of the Republican Party is sick of the GOP leadership’s empty campaign promises, gutless lack of resolve and failure to use all means at their disposal to rein-in Obama’s lawlessness and hold him accountable. Bringing John Boehner and Mitch McConnell into political combat is like bringing a wet noodle to a sword fight.

Second is Trump’s bold, often witty and always delightful smackdowns of mainstream media so marinated in leftist ideology and political correctness that they wouldn’t recognize objective journalism if it bit ‘em in the … well, you get the idea. (For a great analysis of this phenomenon read Tristan Emmanuel’s short E-book, “Donald Trumps the Media.”)

Finally, and I think this is the big one, Mr. Trump has quickly come to both signify and personify Middle America’s utter disdain for all things politically correct. “I don’t frankly have time for total political correctness,” he told Megyn Kelly in the GOP’s first presidential debate. “And to be honest with you, this country doesn’t have time either.”

Of course, not everyone agrees. In a recent op-ed titled, “Civilities: The current rage about ‘political correctness’ is both wrong and rude,” Washington Post columnist Steven Petrow laments, “‘Political correctness’ has long been considered a pejorative, an accusation hurled at those of us who choose our words carefully so as not to insult others. …

“Language evolves all the time, and a change that allows individuals and groups to claim their own identity increases civility, which costs the rest of us nothing.”

Ah, moral relativism – the secular left’s escape pod from reality. “Language evolves all the time.” Get that? That’s Orwellian for, “Yes, we liberals understand that words have meaning. That’s why, when we don’t like the meaning of words, we arbitrarily invent and ascribe a new meaning to those words to suit our pseudo-utopian political ends – the truth be damned.”

Petrow continues, “Far from restricting debate, the language of political correctness has returned a new dignity to formerly marginalized groups.”

Far from restricting debate? A new dignity? Tell that to presently marginalized groups like Christians and conservatives who prefer to operate within the sometimes-jarring universe of objective reality, rather than the fantastical realm of Planet Progressivism. Tell that to Kim Davis – to the Christian baker, florist, photographer and other business owners who now face six-figure fines or even jail time for merely acknowledging the politically incorrect fact that marriage remains as it’s always been – the union of a man and a woman.

And never the twain shall meet.

Merriam Webster defines “political correctness” as “conforming to a belief that language and practices which could offend political sensibilities (as in matters of sex or race) should be eliminated.”

“I’m sensing something in the air these days, and it’s unsettling,” continues Petrow. “At a recent dinner party, my host went on a rant about Caitlyn Jenner (whom she insisted on calling ‘Bruce Jenner’), which devolved, quickly, into a full-throttle tirade against being ‘politically correct.’”

Politically correct version: “Caitlyn Jenner is a courageous woman who used to be a man named Bruce. She has transitioned to the woman she’s always been and is a wonderful role model for everyone, especially LGBT youth. She’s a hero. Off with the old, on with the new.”

Civil version: “Bruce Jenner is a mentally ill man who is pretending to be a woman. He has mutilated his body to appear feminine by adding artificial breasts, pumping himself full of synthetic estrogen and having cosmetic surgery. He ostensibly intends – if he has yet to do so – to have his genitalia destroyed as well. Bruce still has, and will always have, an X and a Y chromosome. He will always be male and he will never be female. He is to be pitied rather than emulated. Bruce Jenner, and others who suffer from gender identity disorder, need psychiatric help, our sympathies and our prayers.”

As you can see, the politically correct version, though flowery and nice sounding, is completely untethered from reality, while the civil version, though jarring to those who choose to deny reality, happens to be true. Mr. Petrow calls America’s growing rejection of political correctness, “unsettling.” I can see that. To folks who prefer the makeshift murkiness of relativism, the crystal clarity of absolute truth must be unsettling indeed.

And so back to Donald Trump. To the extent this intransigent GOP front-runner continues to hold the Republican establishment’s feet to the fire, debunk the myth of an “unbiased media” and undermine the postmodern concept of political correctness, I say, go get ‘em, big guy.

Beyond that – well, I’m just glad the primary isn’t Tuesday.