How Christian Kids Should Deal With ‘LGBT’ Peers 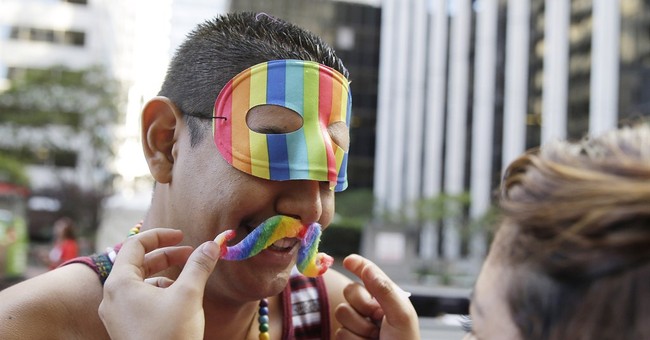 Note: It is for columns like this that I created a “Hate Mail” folder in Outlook.

None can deny the fast-rising popularity and approval of the “lesbian, gay, bisexual and transgender” (LGBT) lifestyles. Most especially, perhaps, the “bisexual orientation,” which has become rather fashionable and, hence, more frequently practiced among today’s blindly “tolerant” millennial generation.

These are behavior choices that, for all of recorded history and until just the last few decades, have almost universally been recognized as immoral and unhealthy. The Bible, throughout both the old and new testaments, unequivocally and without exception, holds these behaviors to be sexually immoral – to be sin. God’s word never changes and never will. Neither will this objective reality.

So, with all of this cultural “progress” away from comprehensively fixed natural and moral laws, an inevitable question arises: How should Christian children and teens interact with peers who either identify with, or are believed to engage in, a lifestyle marked by homosexual or cross-dressing behaviors?

The answer, generally speaking, is fairly straightforward: They should interact as all Christians should interact with all fellow sinners, with all people – with prayer, humility, wisdom, justice, honor, mercy, love and truth.

To be sure, extremist sexual pressure groups have mastered the use of propaganda to push a selfish political agenda. They have been shameless in manipulating the specter of bullying as a Trojan Horse to silence Christian values. Yes, anti-bullying policies are appropriate and necessary, but the vast majority of bullying incidents do not involve a victim’s sexual lifestyle. Yet it is these sexual lifestyle choices that are nearly the exclusive focus of most anti-bullying policies. This betrays the true goal of many “anti-bullying” proponents: to gain, officially, widespread affirmation of the “LGBT” lifestyle at the expense of traditional values and, moreover, to disingenuously paint adherents to biblical sexual morality as bullies.

We need a broad, comprehensive anti-bullying strategy, not legislation rooted in segregation and discrimination that singles out one special-interest group for preferred treatment over others. Ironically, this unseemly political push actually amounts to “Bull Connor bullying” on the part of “progressive” activists.

Even still, and anecdotally speaking, self-defined “LGBT” children and teens are bullied from time to time, and this is never OK. It goes without saying that to bully anyone for any reason is anathema to Christ’s admonition to “love your neighbor as yourself.” Christian children should never take part in such activities.

I hold reality at a premium. As a boy I was, and yet remain, an insolent “gender-conformist.” As such, I learned to scrap from an early age. My father was, and I would later become, a professional boxer. He trained me, my three brothers and, yes, my two sisters, how to properly use our fists in defense of both self and others. In the sticks of central Oklahoma, such talents were not infrequently advantageous as, at that time and in that region of the country – before liberal ninnies took to feminizing them – “conflict resolution” between boys usually ended with eyes blackened, knees skinned, noses bloodied and shirts ruined.

Still, under threat of a brightly hued backside, we were likewise taught that to use the physical skills we developed and honed to either pick fights or to bully others was both intolerable and dishonorable (this was a bygone era when words like “tolerance” and “honor” still meant something – before “progressive” propagandists turned them inside-out).

I can’t abide bullies. Never could. Most decent folks can’t. This is how I was raised. It’s also how I’m raising our three children. As did my father before me, I am teaching and equipping them to stand up to bullies. Not just when, and if, they happen to be the target of bullying themselves, but also when, and if, others are targeted. I’m raising my children to be friend to the friendless and champion to the vulnerable. I’m proud to say that all three of them are naturally inclined to such. I credit both God and His word of truth for that.

My son, for example, is in the seventh grade. He is very big and very strong for his age. His grandfather and I are also teaching him to box. I have instructed him that if he sees one of his schoolmates being bullied by others, for any reason (to include for being “LGBT”), that he should intervene – up to and including using physical force, if reasonable and appropriate according to the law, to eliminate the threat of bodily injury.

Indeed, many schools today have mindless “zero tolerance” policies relative to physical violence. Some require that if a bully attacks, a child should drop to the ground and curl up in a ball until an adult arrives. These are schools with policies written by pseudo-utopian, Birkenstock-wearing urban liberals who decidedly did not grow up in central Oklahoma. I couldn’t give two flips what school policy says. I care what the circumstances demand, justice requires and the law allows.

To be sure, not all children can, or should, attempt to physically defend a schoolmate who’s being violently bullied. Some just don’t have the physical or emotional wherewithal to do so. That’s fine. The principle still stands. Where a Christian child sees a peer being bullied for any reason, to include when that child is perceived to be a homosexual, the Christian child, if so led, should do something, if only verbally, to intervene. It may not come without sacrifice, mind you (ridicule, bruises, bumps or bangs), but when did faithful Christianity ever come without sacrifice?

Still, one need not compromise on biblical truth to love another as himself. In fact, refusing to deviate from biblical truth and fearlessly sharing that truth, in love, with those in denial of it, is compassion defined. It is a central component of the Great Commission.

To claim to love someone and to lie to them is to hate them – especially when that lie invariably leads to a tragic and hopeless end.

If you have a loved one, blindfolded and running full speed toward cliff’s edge, do you not yell, stop! Would you not run after them, even tackling them if need be to prevent them from plummeting to certain death? What would we think of the person who said: “Keep running. All is well.”

The same goes for how Christ followers, whether children or adults, should respond to those deceived by “LGBT” identity politics, impulses, temptations or behavioral choices.

I’m not saying that kids need drag a soapbox to school, thump a Bible, as secularists like to accuse, and assume the persona of angry street preacher. I’m merely saying that, though it may be difficult, children, if asked, “What do you think about me being gay,” or some such, should respond truthfully and compassionately, “I believe what Christ taught: that sexual behavior is only appropriate in marriage between a husband and wife. Anything outside of that is wrong.”

Christian kids should tell their “LGBT” peers that we love them, as does Christ, their Creator, because He first loved us.

Katie Pavlich
The Reasoning Behind Gavin Newsom Hiding Key COVID Data Is Something Only a Liberal Would Thing Of...
Matt Vespa
Analysis: No, Tom Cotton Didn't Lie About His Military Service
Guy Benson
'No Plan' Update: 20 Million-Plus Vaccine Doses Now Administered in US, More Than 1 Million Daily
Guy Benson
GOP Senator Identifies Who Biden Is Helping By Canceling Keystone Pipeline

Cortney O'Brien
Letter: If the FBI is Going to Investigate Parler, Twitter and Facebook Deserve the Same
Katie Pavlich