What to do When Forced to Perform ‘Gay Weddings’ 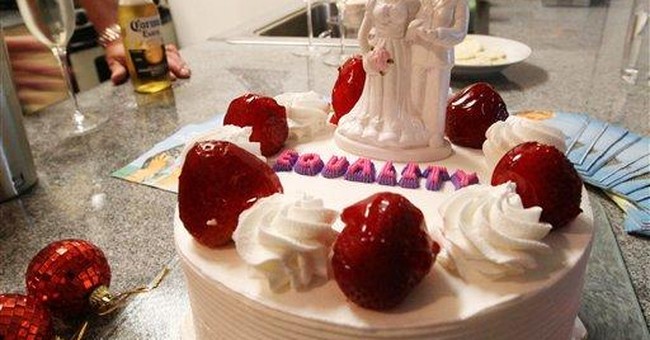 Churches in Denmark are now compelled, by law, to host same-sex “weddings.”

Tyranny’s appetite is insatiable. The secular-left’s hunger for power and control over its detractors can never be satisfied. To outwardly succumb and affirmatively capitulate to their pagan demands will never be enough.

Thought control is the goal.

He and his elderly mother (an employee) have additionally been “sentenced” to attend “sensitivity training” (read: re-education camp). There, some snot-nosed college grad with a degree in “feminist/gender studies,” or some other such nonsense, will endeavor to scrub all biblical notions of human sexuality and natural marriage from their minds, hearts and souls, reboot and upload Mozilla Moral Relativism 2.0.

As Mr. Phillips has indicated, he has no problem baking for homosexuals, but, as a Christian, he simply cannot and will not contribute his time and God-given gifts to bake a “wedding cake” that mocks and defiles God’s design for the immutable institution of legitimate marriage.

Nor would he bake for a white supremacist rally or any other similarly wicked event that likewise flouts biblical truth.

As a result, Phillips has said he will stop baking wedding cakes altogether.

I hope that Mr. Phillips will bake on. I hope he’ll embrace the mantel of the Rev. Martin Luther King Jr. and engage in civil disobedience. I hope he tells this “brood of vipers,” in a loving and Christian way, to get bent.

This is his Rosa Parks moment.

Then he should prayerfully consider attending the “sensitivity training” as a ministry opportunity and co-opt it for the glory of Christ. He should take it over with respectful questions and direct disagreement. He should refuse to waiver one iota on biblical truth and rebuke those who deny Christ and His truths.

He should educate the “educators” as well as everyone else in attendance.

That’s what it means to pick up your cross and follow Christ.

But that’s just some baker, right, pastors? Sure, it’s happening to photographers, florists, inn keepers and bakers, but at least the church is safe.

This is the issue. For some reason the enemy has chosen sexual immorality and faux “marriage” as a hammer to bludgeon the church.

Denmark was the first nation to imagine same-sex “marriage” as a matter of law. It’s now one of the first to compel, under penalty of law, churches to desecrate holy ground by hosting these sin-centric, pagan spectacles.

Columnist and AFR Talk radio host Bryan Fischer reports, “Well, the day we prophesied has arrived. Churches in Denmark – and the U.S. will not be far behind – have been ORDERED to perform sodomy-based weddings whether they want to or not.

“According to the London Telegraph, a new law passed by the Danish parliament ‘make(s) it mandatory for all churches to conduct gay marriages.’ No options, no exceptions, no choice. Homosexuals are to be married wherever they want, regardless of whose conscience is trampled and whose sanctuary is defiled in the process. …

“Unless America’s pastors rise up as one, now, that day will arrive like a thief in the night, a day when each pastor will be told that he must solemnize sodomy-based marriages in his church or his church’s 501(c)(3) status will be revoked. At that point, he and his church will effectively be out of business.”

Mr. Fischer is right. It’s a foregone conclusion. We are no longer a constitutional republic. American pastors, like bakers, florists, photographers and every other citizen, will be confronted with a choice: Obey God or obey man. Pastors will be compelled, under threat of imprisonment, to participate in these unholy pagan rituals.

Pastors, priests, you will then face three choices: 1) Surrender, disobey God’s law and obey man’s, 2) Stand firm, disobey man’s law and obey God’s, or 3) Use the opportunity to serve, speak truth in love and glorify Jesus.

When you men of the cloth are inevitably put to this test, I suggest you do the following. It will take great courage and the strength of the Holy Spirit.

“Preside” over the mock marriage and speak the following truths in love:

“As Christ said, ‘Have you not read that He who made them at the beginning ‘made them male and female,’ and said, ‘For this reason a man shall leave his father and mother and be joined to his wife, and the two shall become one flesh?’

“Do we dare call the living Christ a liar?

“As it is written: ‘Because of this, God gave them over to shameful lusts. Even their women exchanged natural sexual relations for unnatural ones. In the same way the men also abandoned natural relations with women and were inflamed with lust for one another. Men committed shameful acts with other men, and received in themselves the due penalty for their error (Romans 1:26).’

“God warns, ‘Woe to those who call evil good and good evil.’ I will not call this evil good. You can persecute me, jail me or even kill me, but you cannot force me to deny Christ.

“I am a sinner and can cast no stone. Neither can I condemn you. But, as did Jesus, I can tell you this: ‘Go and sin no more.’”

“Because your eternity depends on it.”

Then walk away and pray that these Holy Spirit-inspired words, these transcendent truths, pierce the hearts of those in attendance who labor under deception – who suffer under this “strong delusion.”

That’s what it means to pick up your cross and follow Christ.