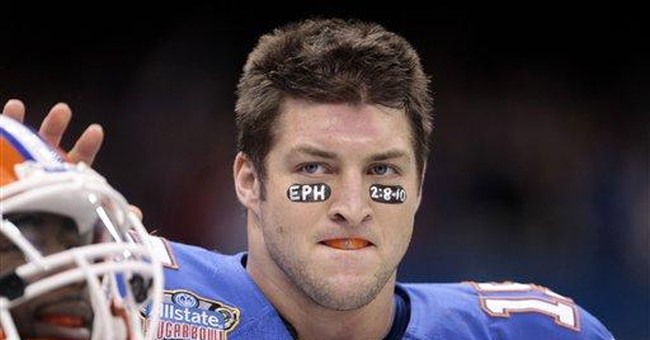 "If you don't like it just turn off the TV!" goes the liberal mantra as all form of sexual perversion, obscenity and violence slinks unannounced into our living rooms. But when the message is perceived to undercut some carefully crafted left-wing narrative? Well, then not so much.

Fire-breathing feminists, liberal-media automatons and other "progressive" pro-aborts are anything if not predictable. They've once again concocted controversy where – to the emotionally stable among us – there is none.

The latest target of their cultish ire is Heisman Trophy-winning quarterback and all-around-great-guy, Tim Tebow. A crusty glut of anti-birth femi-ninnies (so cute when they're mad), representing an ever-dwindling number of pro-abortion fundamentalists, have drawn a bead on Tebow for the crime of, well, existing.

Additionally charged with "speaking while Christian," Tebow has knotted many ninny knickers by agreeing to participate, along with his mother Pam, in a Super Bowl ad commissioned by the Christian group, Focus on the Family.

As the mainstream media tells it, the ad will, in about 30 seconds, apparently set the "women's movement" back 40 years. It's additionally presumed (nobody's seen it or even read the script mind you) to both horrify and offend the entire nation.

So what have these dastardly Dobson devils done? Leaks indicate that the spot will share the story – inspirational by any objective standard – of how Pam Tebow "chose" to carry baby Tim to term despite a doctor's recommendation that she have an abortion. That's it. No "abortion is murder" tag line (it is). No "down with Planned Parenthood" pitch (yes, please). Simply: "Hi, I'm Pam. I chose to have my baby and not abort him. He won the Heisman. Neat, huh?"

Well, you'd think Roe v. Wade had just been overturned (it will be) and that every bra-burning broad in Berkeley faced time in the pokey. The usual suspects – a shrill gaggle of leftist "women's groups" – got the vapors, hit the fainting couch and demanded in their enduring "take-the-trash-out!" tone that CBS censor the Tebows and pull the spot.

Erin Mattson, vice president of The National Organization for Women (NOW) told ABC News that Tim's story was "really quite offensive. … This ad is hate masquerading as love!" she barked (Tim wasn't dismembered alive and scraped in pieces from his mother's womb, you see. That would've been peachy).

OK – so much pablum, so little time: "Attack on choice?" "Hate masquerading as love?" Does patchouli oil cause brain damage? Give liberals a fish; they'll eat for a day. Give them hemp; they'll smoke half, weave a rope and then hang themselves with it.

It's remarkable that these people are so invested in a culture of death – so blindly devoted to goddess "choice" – that they've lost all sense of how foolish they appear to others. Rather than taking the time to walk through an introspective analysis, they involuntarily lash-out.

They fail to ask: "In what possible way is it an ‘attack on choice' for a woman to share the tale of how – when given two clearly defined options – she ‘chose' life over abortion?" That's choice defined. It just happens to be – from an angry, oft-hurting, always twisted perspective – the wrong choice.

They fail to ask: "In what possible way is it ‘hate masquerading as love' for a woman to share the tale of how – when given two clearly defined options – she ‘chose' life over abortion?" That's love defined; more still, while risking self so the child within might live. (Greater love has no one than this, than to lay down one's life for his friends. John 15:12).

So if not logic, then what?

But they needn't fear.