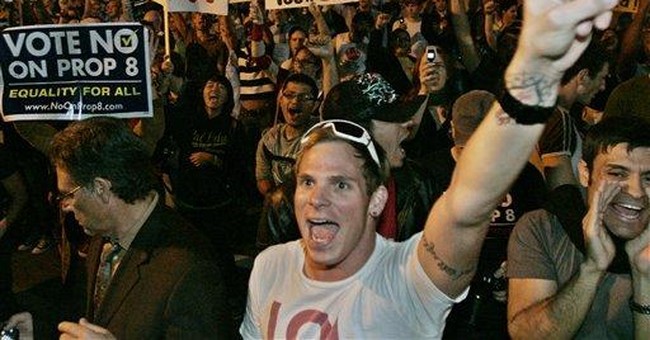 With a unified voice amplified several million-fold through the ballot box megaphone, African-Americans have spoken on the issues of marriage, family and human sexuality. Whether young or old, male or female, Democrat or Republican, blacks are justifiably fed up with the deceptive antics of the self-described and craftily contrived "gay rights movement."

For decades now, well-organized, well-funded and highly influential "gay" political pressure groups have, with impertinence, hijacked the language of the authentic civil rights movement. In what amounts to a sort of soft racism, self-styled "queers" have disingenuously and ignobly hitched their lil' lavender wagons to a movement which, by contrast, is built upon the genuine and noble precepts of racial equality and humanitarian justice.

An illegitimate offspring of the '60s sexual revolution, the newfangled "gay rights" cult is today's postmodern, sex-centric cause célèbre. Its core tenets include, among other things, mandated moral relativism, social androgyny and forced acceptance of a pleasure-based, though demonstrably destructive, lifestyle. Apart from practitioners of "the sin that dare not speak its name," its devotees are in large part institutional fringe elitists confined to blue-state America who almost universally suffer the insufferable pangs of white guilt.

Like an addict jonesing for a hit, they long for that rush of self-righteous affirmation associated with belonging to something perceived as larger than themselves. Central to the movement's success is the ability to draft adherents who are easily manipulated through superficial slogans, appeals to emotion via anecdotal parades of horribles, and a mindless propensity to conform to nonconformity.

By drawing artificial parallels between the systematic persecution experienced by blacks over centuries past to the inherent aversion most have toward biologically unnatural, traditionally immoral and objectively perverse sexual behaviors, the homosexual lobby trivializes and diminishes the African-American struggle for civil rights. It's dishonest and offensive for people who choose to define their identity based upon aberrant sexual proclivities to compare sexual temptation and volitional sexual conduct to immutable and innocuous biological traits such as skin color.

Understandably, blacks want all this nonsense to stop. Exit polls indicate that in the Democratic stronghold of "left coast" California, African-Americans – 96 percent of whom voted for Barack Obama – also voted to pass California's marriage protection amendment (Prop 8) by an overwhelming 70 to 30 percent. As luck would have it, the unprecedented turnout of black voters for Obama very likely tipped the scale and restored the enduring definition of natural marriage to the Golden State. This has made "gay" activists mouth-foaming furious.

But black support for legitimate marriage and natural sexuality has placed liberal elites in a real tight spot. They can either attack the African-American community with the same vitriol and empty, ad hominem rhetoric they've hurled at evangelical whites and other traditionalists over the years, or they can ignore them entirely.

In the aftermath of Prop 8's passage, they've chosen option A. Although one might find it incongruous to tag blacks – a community intimately familiar with genuine discrimination and bigotry – with the "gay" lobby's favorite monikers of "bigot," "hater" and "homophobe" – homosexual activists are doing just that.

But they've slunk to the gutter deeper still. There have also been widespread reports of homosexuals hurling the N-word and other despicable racial epithets at blacks throughout California and elsewhere.

Even more troubling – something the mainstream media refuse to cover – are the many threats of violence against Christians and other supporters of Prop 8 popping up on numerous homosexual websites and elsewhere. Some homosexuals have even called for churches to be burned to the ground. In California, some of those churches have already been vandalized.

In a blog entry titled "You'll want to punch them" on Queerty.com, poster "Billy Bob Thornton" wrote, "… I have never considered being a violent radical extremist for our Equal Rights, But now I think maybe I should consider becoming one." "Stenar" asked, "Can someone in CA please go burn down the Mormon temples there, PLEASE. I mean seriously. DO IT." And, "Jonathan," warned, "I'm going to give them something to be f---ing scared of. … I'm a radical who is now on a mission to make them all pay for what they've done."

Meanwhile, over at JoeMyGod.blogspot.com, "World O Jeff," said, "Burn their f---ing churches to the ground and then tax the charred timbers," while "Tread," wrote, "I hope the No on 8 people have a long list and long knives." "Joe," stated, "I swear, I'd murder people with my bare hands this morning."

And watch their backs they should. Here we have homosexuals both inciting and directly threatening violence against Christians and other supporters of Prop 8. This is not free speech; this is criminal activity. Imagine if Christian websites were advocating such violence against homosexuals. There'd be outrage, and rightfully so. It'd be national front-page news.

But it gets worse yet. In recent days, there have been headline-making "gay" riots marked by actual acts of violence against marriage supporters. In one instance, an elderly woman was assaulted by an angry "gay" mob. She was walking peacefully, carrying a large Styrofoam cross when she was knocked about by enraged rioters. They ripped the cross from her hands, threw it to the ground and stomped it to tiny bits. The surreal ordeal was a live-action metaphor for the "queer" rebellion against God's natural order and the hard left's not-so-thinly-veiled hatred of Christianity.

Finally, even more recently it's been reported that a group of about 30 militant homosexuals attacked the Mount Hope Church in Lansing, Mich. They reportedly pulled the fire alarm, stormed the pulpit screaming "Jesus was a homo," waved condoms, kissed one another and physically intimidated congregants in an attempt to provoke a violent reaction. Of course, the mainstream media will report on none of this. It doesn't fit the politically correct narrative. Homosexuals are the victims, you see, not the victimizers.

But good has, and will, come from it all. The left's venomous reaction to the passage of Prop 8 has showcased these people for who they truly are. It has removed the sublime mask, revealing an ugly and desperate countenance below. It has exposed the self-proclaimed agents of "tolerance" and "diversity" as the most intolerant, hateful and bigoted among us. It has revealed – as Scripture says of those trapped in homosexual sin – that they are "[given] over to a reprobate mind."

Yes, the mask is off and so are the gloves. It'll likely get worse before it gets better. But now is the time to stand firm ground. Thousands of years of history, every major world religion and uncompromising human biology have always had it right. Homosexual behavior will always be wrong and "same-sex marriage" forever a fantasy.

What God has cast asunder, let no man join together.