An Open Letter to My Four Children 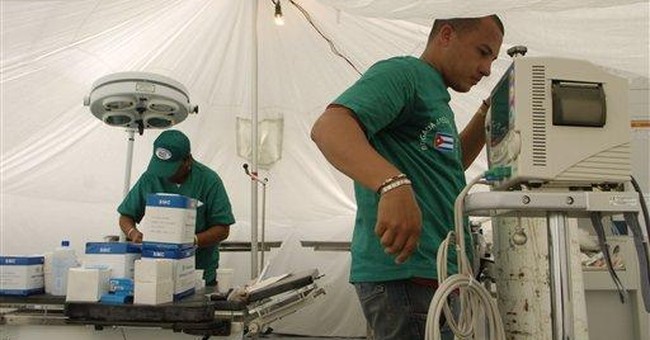 An Open Letter to My Four Children: I don't care what President Obama says, you may not remain on our health care policy until you are 26.

For the record, you also may not move into the basement and install black lights or hang Che Guevara posters (or posters of Barack Obama in the style of Che), nor may you consider our laundry room an intergenerational gathering place.

At 26, you will have been a legal adult for five years and will have obtained an education or professional training. You will have been taught to drive, cook, operate a power drill, call the cable company when the service goes down and, most important, prepare your own income-tax return.

You will be old enough to get married, enter into a binding legal contract, start a business, buy a home and even rent a car.

Twenty-six isn't terribly old, but it's old enough to know better. It is not adolescence, no matter what the American Psychological Association says.

Not to worry. We have confidence in you. Adulthood is not as hard as it looks.

Perhaps because the president's own children are still so young, he doesn't realize that success in parenting is defined by our children's independence.

Children seek independence naturally from the time they are toddlers, yelling "All by myself!" at the least interference from an adult.

They follow this instinct as adolescents by lying about their whereabouts, erasing their text messages and wearing styles that makes us cringe with embarrassment.

Nothing is as important as this innate quest for independence because it is the essential element to becoming an adult.

For the sake of our nation's future, it's an instinct whose smoldering ashes ought to be fanned, not squelched by the lure of "slackerdom."

Yet last week at a rally to generate support for his sinking signature health reform bill, Mr. Obama announced with fervor that the plan includes a provision for unmarried adults up to age 26 to be covered on their parents' policies, irrespective of their educational status or employment.

The "young adults" in Mr. Obama's audience cheered as if the school principal had just told them they were getting an extra recess, while he smiled with self-satisfaction as if this act of largesse is his right to bestow.

Keep in mind that such coverage isn't really free. It just feels that way to the president and the young adults who won't be paying for it.

According to the Commonwealth Fund, a health-policy think tank, Americans age 19 to 29 account for 30 percent of the uninsured. They achieve this status by "aging out" of their parents' health insurance plans while working in jobs that don't offer health benefits.

But extending the period of dependency on their parents will only serve to further erode the already-shrinking sense of adulthood among "young adults" while offering no permanent solution to the problem of unaffordability. (Even the moniker young adults implies they're not the real thing, but rather a less capable version.)

In a free market, insurers should be able to offer health care products designed to meet the needs of consumers of all ages. Given their relative good health, a product for younger adults should be nominal and profitable. But insurers must be free to offer only the coverage this segment wants and needs, not a regulation-saturated policy that offsets their grandparent's medical bills.

Even a caveman can see that.

Given how fast and loose he plays with other people money [-] specifically the productive fruits of future generations [-] it's no surprise that Mr. Obama instead wants parents to underwrite the needs of our adult children.

Twenty-six year-olds are not "kids," as one liberal commentator on a weekend news program audaciously called them, and mandating that certain adults pay for the insurance of other able-bodied adults [-] even ones to whom we're related [-] is not a mark of a free society.

On the other hand, if Mr. Obama's audience is any indication, Generation Y is quickly turning into the first fully dependent generation in a Socialist America. Perhaps we ought to call it Generation S.

It's no wonder the "free" that made this crowd erupt was the promise of a free ride.