A Tale of Two Books

Marvin Olasky
|
Posted: Jan 24, 2019 12:01 AM
Share   Tweet
The opinions expressed by columnists are their own and do not necessarily represent the views of Townhall.com. 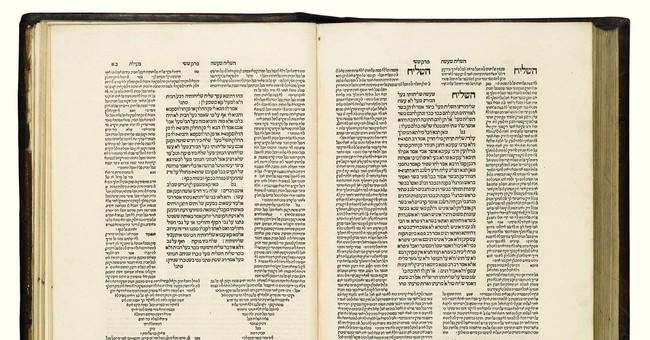 I grew up in a Jewish household, went to six years of Hebrew school three days a week after public school, and chanted my way through a bar mitzvah service at age 13. I then started going evenings to a school for studying the Talmud, which is made up of ancient rabbinical debates. One edition runs 73 volumes.

Here’s an example of what’s in the Talmud about Sabbath-keeping: Chaim Saiman’s “Halakhah: The Rabbinic Idea of Law” (Princeton, 2018) summarizes 39 “categories of prohibited activities, one of which is writing. . A person who writes only one letter is exempt, one who writes two letters is liable for violating Shabbat. Use of ink, dye, or permanent liquids generates liability, while colored water or etchings in the dirt do not. Writing with the hand is a problem; writing with the foot, mouth, or elbow is not.”

And that’s not all: The Talmud includes discussion of “writing one letter on the ceiling and another on the floor, or two single letters on separate pieces of paper that are later put together.” Other issues: Is it “permitted to piece together a puzzle on Shabbat (potentially problematic since it creates an intelligible picture)”? What about playing Scrabble? (That’s mostly OK, but in the Deluxe Edition the board’s grooves hold the letters in place, thus producing a potentially permanent “writing,” which is not OK.)

Such analysis quickly made me a Talmud school dropout. At age 14 I abandoned Judaism and became lawless personally and philosophically, only to become enslaved to Marxism six years after that. Not until six more years later did statements like this one from the Apostle Paul’s letter to the Galatians attract me: “For freedom Christ has set us free; stand firm therefore, and do not submit again to a yoke of slavery.”

Thankfully, I’ve been able -- only through God’s mercy -- to stand firm over the past 42 years: Christ-followers like me who rebel against childhood legalism often have the tendency to flop the other way, toward antinomianism, rejection of all laws. That’s especially so because so many cultural pressures push us toward absolute freedom, including even attempts to change our sex.

The alternative to both legalism and anarchy is the whole Bible, as Wayne Grudem shows in his excellent “Christian Ethics: An Introduction to Biblical Moral Reasoning” (Crossway, 2018). For example, regarding Sabbath-keeping, Grudem has a solid chapter examining the various positions. He concludes that it’s wise to have regular times of prayer, worship, learning, and fellowship and to have a day of rest, but coming to an almost-total stop is not obligatory.

Christians, of course, have the advantage of seeing how Jesus regarded the Sabbath and other Old Testament provisions. For example, some Christians say we should not respond to accusations, and others are ready to bring lawsuits at the drop of a disagreement, but Grudem describes “a general pattern in Jesus’s ministry: he always defended himself immediately and firmly against false accusations throughout his entire ministry. ... The only exception was the unique situation when he was on trial leading up to his crucifixion,” since Jesus knew He was to “submit to the Father’s plan that he would die as a criminal, under false accusation.”

Grudem’s 1,296-page book is more reference work than bedtime reading, but its balance will often be useful. One more example: He writes that material prosperity is a plus but it’s also “a matter of secondary importance, and it carries dangers.” The good overall message: With great liberty comes great responsibility to use our time to glorify God and not ourselves.