One Life Changed (We Pray), Millions To Go 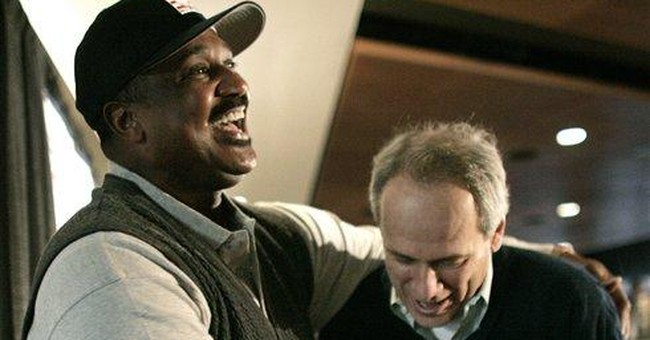 The first video to go viral this year (see YouTube) starred Ted Williams, not the hitter but "the man with the golden voice," a 53-year-old homeless guy who has spent the past two decades doing drugs and committing crimes. Earlier in his life he had done well in radio, but, "In all my success I never acknowledged God." Now he says he is trusting in God. He's had a relapse and went into rehab, so let's all pray for him.

But what about millions of others who are homeless or are on welfare? What will help them? In 1995 and 1996 I took a 20-month leave from teaching to spend time in Washington and around the country pushing for welfare reform. The effort was successful on the surface, as Congress eliminated many abuses, but most administrators, like Ted Williams, never acknowledged God—and apart from Christ nothing works for very long.

The other problem is that few programs acknowledge one of God's chief anti-poverty devices, marriage. In 1995 the Kenosha County (Wis.) Job Center, heralded as "the cutting edge of welfare reform," decorated its walls with posters proclaiming, "A family doesn't need a man to be whole," and "Stop waiting for Prince Charming, his horse broke down."

One result of such proselytizing for singleness: Over the past 15 years the percentage of births to unmarried women has continued to increase, from 5 percent in 1960 to 32 percent in 1995 and over 40 percent in 2010. Children raised in single-parent homes are six times more likely to experience poverty than children raised in stable, married households.

Welfare reform has been only partly successful because it hasn't come to grips with the spiritual and marital needs of many near the economic bottom. We all need God. Most of us need spouses. Children need fathers and mothers. And we all need government not to provide a safety net that leaves people close to the floor but trampolines that allow those who have fallen to bounce up.

Here's a simple way to get at this question: Should each person materially blessed by God be a brother's keeper, a brother's killer, or a brother's helper? Or, to put it another way, should we be Social Universalists, Social Darwinists, or Social Calvinists?

Social Darwinists argue, following Charles Darwin, for survival of the fittest in the competition for economic advance. They practice malign neglect. They are sometimes, in essence, their brother's killers.

Social Calvinists favor economic and spiritual challenge for all. Just as wise Calvinists preach the gospel to everyone, not knowing who in God's providence will respond, so Social Calvinists are our brother's helpers, patiently coming alongside those in need and giving each the opportunity to break out of poverty.

This year, as Congress reexamines welfare spending, we should accept neither liberal stinginess (continuation of Social Universalistic welfare that supposedly relieves us of the obligation to exercise personal compassion) nor conservative stinginess (substitution of a Social Darwinist system that is cheaper but even colder).

Instead, we should begin shutting down government's failed programs and begin expanding what would work far better: a system of charity and challenge that can activate individuals within religious and civic associations to work intensively with welfare recipients.

We need good data to know what to do. Over the past 25 years, as I've looked at anti-poverty programs and written four books on the subject, my best data resource has been The Heritage Foundation. Heritage folks, in turn, have complimented WORLD Magazine and me for bringing to this issue the biblical understanding that some at Heritage share. We agree on the importance of free enterprise and marriage.

During 2011 WORLD will expand its coverage of attempts to eliminate the negative in Washington and accentuate the positive in biblical poverty-fighting across the country. We'll do so with a grant from Heritage, which likes what we've done and wants to see more of it. WORLD, of course, retains complete editorial control.