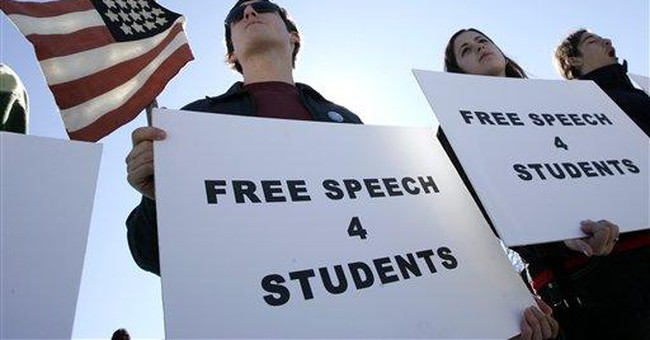 On my desk is a book of the hundred greatest political speeches in American history. I am always struck by how harsh they were. The speeches were rough-and-tumble and politically incorrect by today’s standards.

In those days, candidates could react to criticism and tailor their speeches to the audience. If a speech was reprinted in a newspaper, it would take weeks to publish and even longer for the words to be picked up across the country. In addition, newspapers acted autonomously and had very little interaction or accountability for what they wrote.

Until recently, America had a large and robust variety of newspapers and other printed media, but a smaller amount of broadcast availability due to limited frequencies. The Fairness Doctrine came about during the age of Communism and argued that since the airwaves were limited, there should be balance or “fairness” in the points of view that were presented. It applied only to radio and while in place, radio stations avoided controversial topics altogether in order to avoid any problems with the FCC.

In 1984, due to new technologies, the Supreme Court decided the scarcity argument no longer applied and lifted the Fairness Doctrine. And that was before the Internet allowed for limitless voices. There wasn’t much resistance at the time, because radio was thought to be old media.

The end of the Doctrine allowed the explosion of talk radio, saved AM radio and created thousands of new jobs in the broadcast industry. It was one man, Rush Limbaugh, who at the time showed ailing Top 40 AM radio stations they could flourish and be profitable as news/talk stations. Since then, the left has hated the power of talk radio and has made noises recently that they want a return of the Fairness Doctrine. If that happens, talk radio as we know it will cease to exist.

It’s not enough that liberals control all the major TV news bureaus and most newspapers. They want to control the one free-market component of broadcasting in America: the radio airwaves.

Rep. Mike Pence (R-Ind.) has been one of the leaders in the movement to repeal the Fairness Doctrine permanently. For the last several weeks, he has partnered with talk radio hosts from across the country, members of Congress and media watchdogs to encourage the House of Representatives to sign a discharge petition that would call for an up or down vote on H. R. 2905, the Broadcaster Freedom Act.

The do-nothing Speaker of the House Nancy Pelosi (D-Calif.) said last week that she supports reviving the Fairness Doctrine. At a breakfast hosted by the Christian Science Monitor, John Gizzi of Human Events asked Pelosi if she would allow the Pence Broadcaster Freedom Act to come to the floor without a discharge petition, and she said no. When pressed further on whether she would allow the Act to repeal the Fairness Doctrine permanently, Pelosi said, “No … the interest in my caucus is the reverse.”

The Pelosi Way is to limit competition and free trade. Whether it’s bringing up a vote on free trade with Colombia or protecting speech with the Broadcaster Freedom Act, Nancy doesn’t get it.

The marketplace doesn’t want liberal talk radio. There have been some shows that have done well, but the numbers are not in their favor. This year at the Talkers New Media Seminar, there were more liberal/progressive/independent hosts represented, but the bread and butter still goes to conservative talk because conservatives are so under-represented in the rest of the media market.

Liberals know they can’t win on this issue in a free market, so they want to regulate conservative talk radio out of existence. Their answer to competition is to make the playing field uneven. If advertisers weren’t buying time on Rush Limbaugh, Sean Hannity or Martha Zoller, we wouldn’t be around.

Over the next few weeks, Congress will be out of session more than they will be in session. This is the opportunity for you, the voter, to let them know how you feel about this issue. Let them know you want to end the Fairness Doctrine permanently by demanding the Broadcaster Freedom Act be brought to the floor and given an up or down vote. We must protect the free market everywhere it is being assaulted, and talk radio is a free speech market that should be left alone by regulation.