Martha Boneta
|
Posted: Jan 13, 2022 12:01 AM
Share   Tweet
The opinions expressed by columnists are their own and do not necessarily represent the views of Townhall.com. 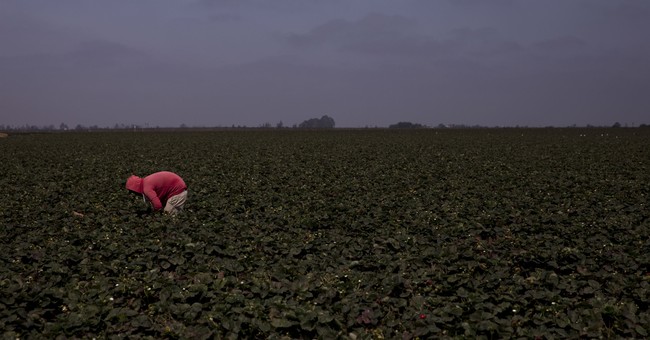 There’s an old saying that we should invest in land because there’s a limited amount of it, so it won’t lose its value.

But when it comes to farmland in the United States, there could be a more pressing reason to invest these days – national security.

China has become one of the biggest players in American agriculture. In the decade ending in January 2020, the Chinese snapped up 192,000 acres of America’s 900 million acres of farmland.

That may not sound like much, but some experts say China’s influence is much larger but concealed by having American straw owners on some of its properties and taking advantage of our lack of stringent reporting requirements and enforcement on others.

It also has made some other purchases, buying Virginia-based Smithfield Foods, the nation’s largest pork producer, and Syngenta, the world’s largest maker of crop protection chemicals and the No.3 seed producer, that indicate it is trying to control the American food market.

It is buying a third more of American cotton than it did a year ago, which has driven cotton reserves to record lows and prices to near-record highs.

The U.S. Department of Agriculture says China now holds nearly half the global reserves of corn and other major gains. Earlier this year, it expanded corn and sorghum imports to four or five times the levels from the previous year.

With farm bankruptcies at an 8-year high, it is now taking advantage to add to its portfolio, driving prices up and Americans who want to own farmland out.

This hoarding spree – ostensibly part of its Belt and Road Initiative – extends beyond farm products to computer chips, minerals and other commodities.

It looks like China is trying to take over the world’s food supply – or at least get enough control of it to ensure its people are first in line and put the squeeze on strategic competitors, such as the United States.

Evidence of this comes from Smithfield, the pork giant, which switched production methods to address shortages in China recently, even though it knew the switch would cause shortages in the U.S.

It also looks like American political leaders have begun to take notice of these attempts to corner markets on a variety of products – and it has set off alarm bells here and around the world.

In 2017, Sens. Chuck Grassley, R-Iowa, and Debbie Stabenow, D-Mich., joined to introduce the Food Security is National Security Act, which would have strengthened protections to keep farmland under domestic control.

Iowa and Minnesota have laws that restrict foreign ownership of farmland, and Sen. Elizabeth Warren, D-Mass., pledged during the 2020 presidential campaign to model federal legislation on Iowa’s law.

And now, members of Congress are trying again. Rep. Dan Newhouse, R-Wash., got an amendment added to the Agriculture-FDA spending bill that would block any new agricultural purchases by companies owned wholly or in part by the Chinese government and prohibit Chinese-owned farms from accessing federal farm support programs.

Rep. Grace Meng, D-NY, complained the amendment could encourage “rising anti-Asian hate,” but Newhouse and Rep. Sanford Bishop, D-Ga., head of the subcommittee preparing the legislation, vowed to work with her to find a solution to that problem.

Newhouse says if this is not addressed, we will be heading toward creation of a “Chinese-owned agricultural land monopoly.” Former Vice-President Mike Pence says we “cannot allow China to control our food supply” and that we should end farm subsidies for land controlled by foreign nationals.

At the same time, China is on increasingly difficult terms with a lot of its food suppliers in the West. It has conflict with the US over trade, IP, national security and other issues. It has conflicts with Europe over land hoarding and meddling in key strategic hot spots, such as Afghanistan and Iran. It has trouble even with Australia, a major supplier to China of food.

These conflicts could encourage the Chinese to think in terms of stocking up – of pressing their efforts to acquire land in the US before additional restrictions go into place and to corner other markets and build supplies in case of more permanent conflict.

The time for the US to act is now. We need to get laws in place to make sure Americans with America’s best interests at heart own America’s valuable farmland. There’s a limited amount of it, and the Chinese are determined to stake their claim.