Make E-Verify the Norm, Not the Exception

Mark Thies
|
Posted: Feb 24, 2019 12:01 AM
Share   Tweet
The opinions expressed by columnists are their own and do not necessarily represent the views of Townhall.com. 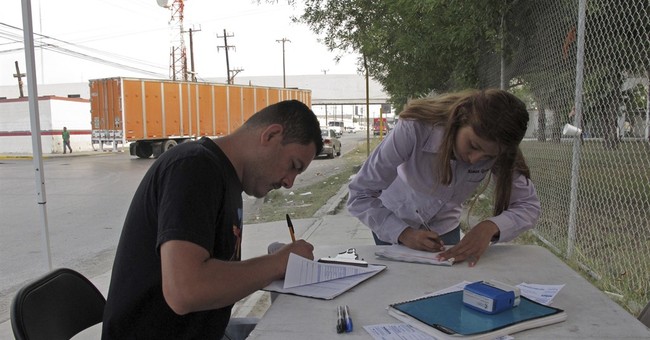 Donald Trump has recently issued his most influential executive order on immigration to date. Unfortunately, his order didn't come from the executive branch -- or anywhere in the federal government, for that matter. Instead, it came from the Trump Organization, the president's private company.

The firm recently announced that its hotels, resorts, and golf clubs would adopt E-Verify  -- the free, online federal program which allows employers to check the legal status of prospective workers.

Although Trump deserves credit for embracing the program, the vast majority of the nation's employers have yet to follow suit. This widespread refusal to adopt E-Verify has led to an economy that exploits undocumented workers at enormous costs to both native-born Americans and legal immigrants. Making E-Verify mandatory would hold employers accountable for their unlawful hiring practices, while humanely reducing the incentive for workers to make the dangerous trip to come here illegally.

E-Verify has existed in some form since 1996, and it's remarkably easy to use. Enrolled companies simply enter the name, birthdate, and Social Security number from a new hire's I-9 form (which itself is highly subject to fraud) into the online system, and they're quickly told whether or not the employee is legally eligible to work.

Nearly 99 percent of new hires are verified as eligible within 24-hours. Most of the remaining 1 percent are eventually found to be illegal immigrants.

E-Verify is free and available to every employer in the country. My employer, Clemson University, has been using E-Verify for years now, and I've never heard of a legal immigrant having a problem.

Unfortunately, most businesses have stayed away from E-Verify, with just 10 percent of employers currently using the program. Why? Because they are lowering operating costs, so they either don't care or don't want to know if they are hiring illegal workers. For example, in a recent survey, 37 percent of illegals in America's three largest cities reported being paid less than the minimum wage, and 85 percent of them received no overtime pay for working more than 40 hours per week.

Of course, these exploitative practices carry significant financial benefits for businesses. According to Harvard University economist and immigration expert George Borjas, illegals generate as much as $128 billion in added value for their employers each year. How ironic that such a perverse plan of income redistribution from the less to the more fortunate now has almost fanatical support from a significant percentage of politicians – with this support being driven by their goal of importing more potential voters into the country.

American workers -- both native-born and legal immigrants -- suffer as a result. After all, if businesses have access to a pool of illegal labor willing to work for less than the minimum wage, why pay legal employees fairly -- or to hire them in the first place? The result, according to Borjas, is that illegal immigrants lower the wages of native-born Americans by between $99 and $118 billion a year.

Mandatory E-Verify would ameliorate many of the problems arising from illegal immigration. As job opportunities for unauthorized workers dried up, the incentive to enter the country unlawfully would plummet, wall or no wall, barrier or no barrier. Overall rates of illegal immigration would plunge, like they did when Trump was first elected – but this time they would stay low. Businesses accustomed to exploiting cheap illegal workers would finally have to pay fair wages to American workers. And Molly Tibbetts, a 20-year old and fellow jogger murdered by an illegal alien whose company didn't use E-Verify, might still be with us.