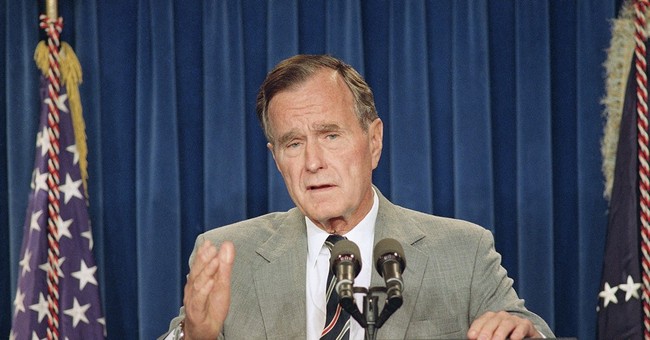 Two bestselling books have been published recently on George Herbert Walker Bush, the 41st president of the United States, both arguing that Bush Sr. was a wise man of character, a war veteran, a former congressman, CIA director, vice president and president who served his country well. He deserves to be admired, they say.

Yet I can never forget his reneging on his pledge made at the 1988 Republican National Convention, “Read my lips, no new taxes.” We are all used to politicians lying and taking back their pledges after getting elected, but this one was especially galling when he used the term “read my lips.” It was like a handshake, where a man’s word is his bond.

In his book, “George H. W. Bush: Character at the Core,” speechwriter Curt Smith addresses the issue straight on and says that Bush Sr. agonized over the decision to raise the income tax rate from 28% to 31% in 1990, but ultimately he caved in “for the good of the country” because otherwise he would have had to cut government spending dramatically.

Yet let’s read the context of Bush Sr.’s 1988 speech, ghostwritten by Peggy Noonan:

Clearly, this is more than a throwaway line. It is the most memorable statement Bush Sr. ever made. And a year later he violated it without much remorse. He didn’t have to do it. He could have cut spending, or run a larger deficit. But he didn’t have to violate a solemn pledge.

You can call Bush a lot of things — a kind man, a patriot, a veteran, a devoted public servant, a good father — but above all he was a politician, not a statesman who was as good as his word.

In case you missed it, I encourage you to read my e-letter column from last week on Eagle Daily Investor comparing how gross output and gross domestic product measure U.S. economic growth differently.