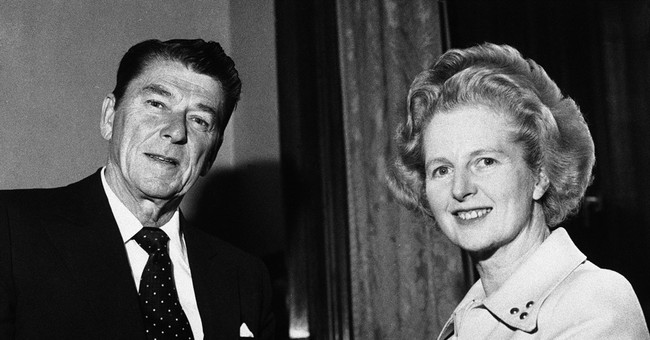 Surprise, surprise! Last week the terrorist group ISIS announced that it was issuing its own currency. Rejecting the paper money of the “tyrannical West,” the Islamic dinar will be denominated in gold, silver and copper coins. Finally, somebody is listening to Ron Paul… or Keynes, who famously called gold “the barbarous relic.” Now the barbarians are adopting gold!

Back here in the States, the U.S. Mint announced that it had temporarily run out of 2014 American eagle silver dollars. At $16 an ounce, investors were buying them at record numbers (40 million were sold last year).

And yet I’m always amazed how political conservatives know so little about the legal tender gold or silver coins that the United States has minted since 1985.

Last month at the New Orleans Investment Conference, I showed former Fed Chair Alan Greenspan an American eagle silver dollar, America’s symbol of sound money and liberty. (See photo of Alan Greenspan and me above.) Although he told me that he collects old Peace and Morgan silver dollars, he failed to recognize the new silver dollar or the 1-ounce American eagle gold coin. Imagine the #1 money man in the country not knowing that his own government mints millions of these silver and gold dollars every year.

Last week I was in Philadelphia for a private meeting (Liberty Congress) and Dick Morris was there. I showed him a 2014 American eagle silver dollar. He reacted similarly to Greenspan and said he had never seen one before.

Even Phyllis Schlafly, the #1 Conservative, didn’t recognize the Eagle silver dollar, even though her organization is called Eagle Forum and Reagan is her favorite president. It was Reagan who signed the American Eagle Gold and Silver Act in 1985, and the U.S. Mint has been producing one-ounce gold and silver coins ever since as legal tender coins.

I’m amazed at the level of ignorance about gold and silver in the freedom movement. I fear the history of sound money is being lost. I often hand out one of these Eagle silver dollars as tips, employee rewards or as a gift to celebrate a birthday, graduation or anniversary. I’m always shocked at how few people today recognize a silver dollar. Sadly, the vast majority of the millions of beautifully minted Eagles are hidden away in safe deposit boxes, not circulated like they used to be years ago.

These beautiful legal tender coins are hidden from the public — I tell people to keep a silver dollar in their pocket or their purse at all times and look at it from time to time. The American eagle has all the great symbols of America — Lady Liberty, the rising sun, the mottos “In God We Trust” and “E Pluribus Unum,” the stars representing the first 13 colonies and the bald eagle brandishing the arrows and olive branches (symbolizing the United States of America willing to defend itself but extending the hand of peace to all nations).

We’re trying to keep the honest-money movement alive at FreedomFest, my annual conference in Las Vegas, by making the American eagle silver dollar our symbol of sound money and liberty. We encourage everyone there to buy a silver dollar from the many coin dealers in the exhibit hall, then have a photo with the speakers at the end of the conference. (Can you see Steve Forbes in the photo?)

We hope to see you there."eagle