Mark Nuckols
|
Posted: Jul 26, 2016 12:01 AM
Share   Tweet
The opinions expressed by columnists are their own and do not necessarily represent the views of Townhall.com. 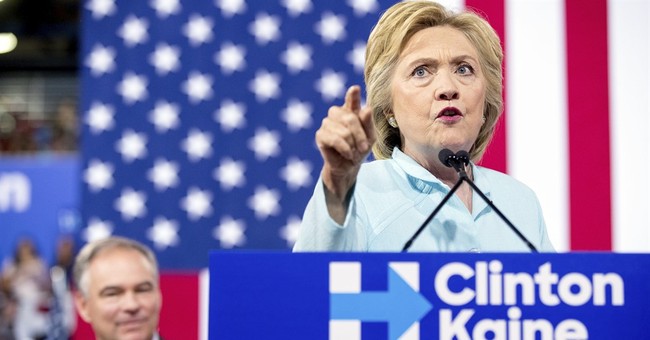 Hillary Clinton is not corrupt. Neither is Donald Trump or Tim Kaine. But all three have shown a penchant for petty money grubbing that shows lax morals, bad judgment, and boundless greed.

Unlike most Americans, I think our political system actually works pretty well. Maybe that’s because I live in Russia, where the political system is not only hopelessly corrupt, but appallingly incompetent. Believe me, Washington ain’t half so bad viewed from the perspective of Moscow. But I am greatly disappointed at the petty grubbiness of three of America’s candidates for national office, namely Hillary Clinton, Donald Trump, and Tim Kaine.

Now, I don’t believe any of these three are corrupt. Corruption po-russki is when the wife of the mayor of Moscow, trained as a hairdresser, manages to accumulate a multibillion dollar fortune doing business with Moscow City Hall. Or when a guy with a shady criminal background is awarded ownership of multibillion dollar state enterprise for two cents on the dollar in a rigged auction, and the government even finances the deal for him. Or when the single most important critic of the President gets shot down in the capital and everyone knows there will never be a real investigation.

Historically, corruption American style has been small potatoes by comparison. Former California Congressman Duke Cunningham took $2 million in bribes for steering $20 million in defense contracts to a crooked contractor. Federal prosecutors sent Cunningham to prison for eight years. Former Virginia Governor Bob McDonnell was prosecuted and convicted for accepting lavish gifts like a $10,000 watch that appeared to be in return for official favors, but the Supreme Court ruled in his case that some degree of mutual backscratching is just politics and not criminal activity.

Now, making money per se is not a crime in America, and Americans rightfully admire success in business. Donald Trump is a very successful real estate developer, when she was not in office Hillary Clinton was first a successful corporate lawyer and later the second most-in-demand public speaker in America (after Bill of course), and Tim Kaine was a successful lawyer before going into politics. But all three have stooped pretty low in their chase for just another dollar.

Bill and Hillary have an estimated net worth of over $100 million. Much of that is the result of authoring immensely popular memoirs and giving speeches for a 100k a pop or more. Well, there are a lot of businesses and trade groups willing to pay top dollar for top-drawer speakers. And Hillary does have a certain star power.

But when is enough, enough? At the same time she is planning to run for President, she gives a series of speeches before Goldman Sachs executives for total fees of $675,000. Did it not occur to her how that would look to most working Americans? To get more for a few hours work than most people earn in a decade, and from plutocrat bankers most Americans loathe? And for what, to add less than 1% to her already immense personal wealth? And it should remind voters of her dodgy commodities trading scheme when she was just First Lady of Arkansas.

Donald Trump, in my opinion, is even worse. I won’t wade into the numerous controversies about his record as a real estate developer, but he seems to have been what is charitably called a sharp operator. But Trump University was an outright scam operation, bilking thousands of dollars from people who mostly couldn’t afford it in return for get-rich seminars of dubious value.

And again, when is enough, enough? If we accept Trump’s claims to be worth $10 billion, did he really need a few extra measly bucks extracted from the gullible and desperate? Assuming his cut was 30%, he netted $10,000 from the out-of-work mother who charged $35,000 on credit cards for his “Elite Program.” If that isn’t the definition of boundless greed, I don’t know what is.

And then there’s the kind of pathetic grubbiness of Tim Kaine. As Lt. Governor and then Governor of Virginia, Kaine collected some $160,000 of gifts and free travel. Some of the gifts were entirely routine, like a rug sent by the president of Afghanistan. More troubling was a trip to a Final Four basketball tournament sponsored by the state’s electric utility which is regulated by the state.

But the incident that really stood out to me was the four cases of wine. After signing new legislation regulating wine producers in Virginia, Kaine accepts four cases of wine valued at $700 from the lobbyists for the vineyards. Now, I doubt Kaine sold his office for 48 bottles of wine. But once again, when is enough, enough? Every time he uncorked a bottle, he should have been thinking, for a $15 bottle of wine, I created at least the impression of taking a bribe, however petty.

What were they thinking? These are my guesses as to the inner working of their grubby little minds.

“I believe it is my fate to be the 45th President of the United States, and the leader of the free world. Hmm, Goldman, could look bad, even derail my candidacy. But hey, who couldn’t use an extra 675k?”

“Hmm, nice palette and good nose, and even better, this bottle of wine didn’t cost me a nickel. Gee, it sure is nice being Governor.”