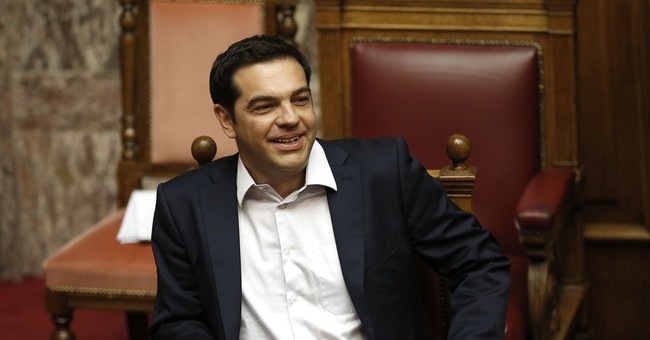 Greek Prime Minister Alexis Tsipras and his party Syriza have just screwed the pooch, and royally so. Tsipras has just done something so colossally idiotic and childish that perhaps Greece deserves its impending economic collapse for having elected someone so incredibly stupid. Greeks have suffered six years of chronic recession and endless rounds of debt negotiations, but this will all seem like a walk in the park compared to the poverty and civil chaos about the engulf their country.

Tsipras, the leader of Syriza (“Coalition of the Radical Left”), went on national TV at one in the morning on Saturday to announce his decision to torpedo Greece’s economy and the future of its people. Tsipras and his fruit-loopy Marxist finance minister have conducted four months of talks with Greece’s creditors trying to unlock more bailout money and bargain for yet another reduction in its outstanding debt. They’ve known all along that this Tuesday, June 30 was the drop-dead date for reaching a deal.

And all along they have been counting on blackmail to squeeze the rest of Europe for concessions. Syriza is garden variety liberalism on steroids, a party whose entire electoral appeal was “vote for us, and we’ll somehow convince the rest of Europe to cancel our national debts, and don’t worry, you can still receive your government pension at age 50.” And Tsipras’ basic negotiating stance has been, “give us more money, or we’ll declare a default, leave the eurozone, and laugh while your financial system collapses.”

Well, Angela Merkel and the finance ministers of fiscally responsible Germany, the Netherlands, and Finland failed to be intimidated this time by scare tactics, and repeatedly urged Tsipras to bargain seriously and in good faith, and accept some simple reforms of Greece’s corrupt economy in return for continued financial assistance. Bolstering their resolve was the growing realization that if Greece defaults and leaves the euro, it won’t cause any great systemic or irreparable damage for the rest of Europe (Greece is a measly 3% of the eurozone economy and its debt have to a large extent already been written off a uncollectible.)

Time was rapidly running out, and Tsipras waited in vain for the rest of Europe to blink first. And when Merkel and company failed to flinch, Tsipras decided to try a gambit whose idiocy defies belief. He announced that Greece will hold a national referendum on June 5 to approve or not the relief package Europe is offering.

First of all, Greece has debt payments due on Tuesday, which can’t be stretched out any longer, unless its creditors submit to this outrageous new bit of hustling, and they’ve made it clear they aren’t. So unless Tsipras climbs down immediately and accepts a humiliating political defeat (which he won’t) Greece goes into default in a few days. And Tsipras gives his creditors no reason to believe he is merely looking to give a new deal democratic legitimacy since he has said he will urge voters not to approve one.

And a referendum on such a complex matter can hardly be organized within a week. Tsipras and Syriza were elected to conduct negotiations and ultimately make the difficult decisions required. This referendum is not only pointlessly idiotic, it is an act of supreme cowardice. Obviously, Tsipras is hoping to save his political career. Either Greece defaults on Tuesday, and he will loudly claim that Europe was unwilling to wait “for just a few days more” for Greece’s voters to decide, or if against all the odds Europe gives Tsipras one more extension, and the voters take his advice, and Greece defaults a week later, he can claim it was “the democratic will of the people.”

Tsipras and Syriza are in for an unpleasant surprise on Monday morning. The European and U.S. markets may dip for a few days, US Treasuries may rally by twenty or so points in a knee-jerk “flight to quality,”, but there won’t be the financial panic they are counting on to soften up their creditors. At the end of the day it will be the people of Greece who suffer. And then it will be up to the Greeks to finally decide whether they want to live in a failed Balkan state like Serbia, or whether they want to toss out Tsipras and Syriza, pick up the pieces and begin the hard work of transforming Greece into an honestly run, economically stable, fiscally sound country. I believe they will, and when they do, and elect a responsible government, then Europe will be all but too happy to help Greece back on its way to its rightful place in Europe.