Keep Calm And Remember What Makes Our America So Great 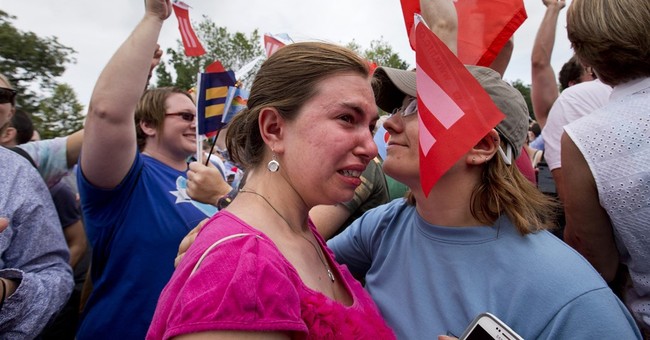 Well, it finally happened, the U.S. Supreme Court in its Obergefell v Hodges decision has just ruled that gay people have a constitutional right to get married. Does this somehow signal the end of Western Civilization and the American Way? And should we follow the advice of some prominent conservatives and simply refuse to accept the power of the Supreme Court to decide this question?


Well, first of all, let me suggest that true conservatives remember that we live in a republic, governed by the rule of law under our Constitution. And part of the constitutional compact is that we respect laws properly passed by Congress and state legislatures, and that we respect lawful decisions by our courts, even if we sometimes disagree with their merits. Let the radical leftists and ultra-liberals preach disrespect for government and the law.

Secondly, true conservatives have faith in America and its eternal promise. America is the finest and most remarkable greatest country in the world, and gay marriage is hardly going to undermine the bedrock of American greatness. Again, let the radical leftists and ultra-liberals predict doom and gloom for our country, we conservatives should stay true to the sunny optimism of Ronald Reagan.

Third, true conservatives are open-minded and tolerant, unlike our adversaries on the left. Justice Kennedy wrote the majority opinion, and Kennedy is no wild-eyed leftist. (Believe me, I went to Georgetown University Law Center where more than a few radical professors were proud Marxists.) Kennedy makes an eloquent case which deserves to be read, even if you disagree with the Court’s decision.
CARTOONS | Tom Stiglich
View Cartoon

“No union is more profound than marriage, for it embodies the highest ideals of love, fidelity, devotion, sacrifice, and family. In forming a marital union, two people become something greater than once they were. As some of the petitioners in these cases demonstrate, marriage embodies a love that may endure even past death. It would misunderstand these men and women to say they disrespect the idea of marriage. Their plea is that they do respect it, respect it so deeply that they seek to find its fulfillment for themselves. Their hope is not to be condemned to live in loneliness, excluded from one of civilization’s oldest institutions. They ask for equal dignity in the eyes of the law. The Constitution grants them that right.”

Kennedy and the majority found gay marriage to be a fundamental liberty. I find nothing in his language or reasoning that I cannot reconcile with conservative political beliefs.

“The fundamental liberties protected by this Clause include most of the rights enumerated in the Bill of Rights. In addition these liberties extend to certain personal choices central to individual dignity and autonomy, including intimate choices that define personal identity and beliefs.”

And in fact our Constitution, especially the Bill of Rights, is designed to protect our basic rights against both the government and sometimes even from the will of democratic majorities.
The idea of the Constitution , Kennedy writes, “was to withdraw certain subjects from the vicissitudes of political controversy, to place them beyond the reach of majorities and officials and to establish them as legal principles to be applied by the courts.”

I think the Court made the right decision, and I’ve considered myself a conservative ever since I was a youth and realized the follies of liberalism and parlor radicalism. But even if you disagree with today’s decision, you shouldn’t despair. One thing about conservatives is that we are grown-ups, and unlike leftists and liberals, we keep things in perspective. Sure, there will be more gay marriages, and some people will not like that fact, as is their right. But I can think of a very long list of things that make America great, and the absence of a right to gay marriage did not make the top 100 list.

And we should never forget that we are all Americans, and as Americans we should appreciate and respect our fundamental institutions. I have lived in countries where courts are corrupt, rights are routinely trampled by rogue governments, and there is no respect for the rule of law. And by “corrupt courts,” “trampled rights,” and “no respect for the rule of law,” I don’t mean court decisions you disagree with, I mean courts who sanction massive theft or condone politically motivated murders on the basis of a telephone call from the Supreme Leader For Life.

For that reason, I strongly believe we should treasure the constitutional order with which America is blessed, and that we respect our Supreme Court decisions, even the ones that didn’t go our way. Especially the one that didn’t go our way. Any other attitude leads down the path of chaos and lawlessness, which are hardly our values or a outcome anyone should desire.

And Americans are good natured people, especially true conservatives. Sometimes life delivers up disappointments. It’s far better, and far more consistent with conservative values, to be a good sport and accept the occasional loss with good humor, and keep your power dry for the next fight. And there will be endless fights over questions of politics and principles in our great country, but I see nothing that can truly diminish America’s unique standing in the world. Certainly not gay marriage.
Glenn Youngkin Delivers Announcement on Investigating Rape Allegations in School District to Packed Crowds
Rebecca Downs
McAuliffe Shuts Down Interview with Local Reporter: 'You Should've Asked Better Questions'
Landon Mion
'Squad' Members Who Advocated for Defunding Police Spent $100K on Private Security
Landon Mion
Youngkin Campaign Responds After Being Accused of Taking McAuliffe's Words 'Out of Context'
Landon Mion
Chicago Alderman: We Can't Afford to Lose Anymore Police Officers Over Vaccine Mandate
Julio Rosas
FDA May Allow ‘Mix And Match’ COVID-19 Booster Shots
Madeline Leesman