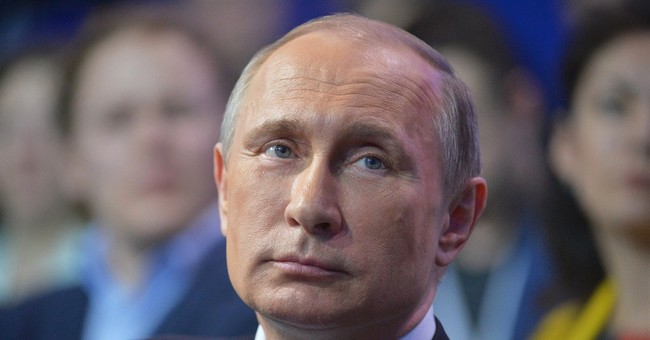 The Kremlin is going all out to turn the traditional May 9 Victory Day celebration into a public frenzy of nationalistic patriotism and public displays of loyalty to President Vladimir Putin. This year Victory Day marks both the 70th anniversary of the defeat of Nazi Germany and the intensification of a new era of anti-Western paranoia and external aggression. And as much as the Russians loudly claim to have defeated fascism 70 years ago, today Russia is marching backwards in history to transform itself into a new, modern fascist state.

In the U.S., Memorial Day is intended to honor those of our soldiers who have sacrificed their lives for their country. In Russia, Victory Day is an occasion for triumphant gloating. Cars are festooned with stickers proclaiming “Onward to Berlin" and “Thanks Granddad for Victory." Moscow has become a festival of Soviet nostalgia, with performances of Red Army songs, billboards proclaiming the invincibility of the Red Army, and street sellers peddling Red Army cloth caps.

The Kremlin’s message is made even more explicit in the May 9 parade of tanks, APCS, and missile launchers that snakes through Moscow for hours before passing the reviewing stands on Red Square. It is an ostentatious display of muscle flexing, designed to show the Russian public that their country is still a military super-power, and that their leader Putin is vigilantly standing guard to defend them against Russia’s enemies. It is also intended to make Russians forget the humiliation of losing what they still consider their rightful empire in Russia’s so-called “near abroad.”

As part of its propaganda campaign, the Kremlin has promoted a very selective version of the history of the Second World War, or The Great Patriotic War as it is known in Russia. It has entirely obscured the fact that before Germany attacked the Soviet Union, the Soviets were allies of Hitler. In the infamous Molotov-Ribbentrop Pact, Stalin agreed with Hitler to jointly invade Poland and annex its territory, with the Soviets also free to annex the then independent Baltic states and a chunk of Romania to boot.

Another Kremlin distortion of history is to trivialize the contributions and sacrifices made by America in defeating Hitler. There is virtually no mention in the history textbooks or state media of the massive quantities of tanks, aircraft and trucks the U.S. gave the Soviets, or of the vital role of the second front after D-Day in securing victory for the Allies. As a result of this rewriting of history, almost all Russians mistakenly believe that the Soviet Union single-handedly defeated the Nazis.

Victory Day has been elevated into the defining triumph of the Russian state and a symbol of renewed military strength. The Kremlin has no other cause with which it can rally the country behind. Because of endemic corruption and incompetence Russia cannot compete economically. Its resource dependent economy is faltering as its petro-dollar reserves dwindle. Under Putin, it has become isolated diplomatically. But Russians still long for the days of glory when the Soviet Union could defeat Nazi Germany and even seemed to be a super-power equal of the United States.

Putin is trying to compensate for Russia’s failings under his leadership with militarism and a cult of state power. He has created a siege mentality by constantly warning his domestic audience that America is conducting a stealth campaign to subjugate Russia, and boasts that Russia is the only country capable and willing to defy American hegemony. And he enjoys sky-high ratings while the Russian public are still drunk on the notion that the illegal annexation of Crimea marks the return of Russia as a great power.

Putin has all but convinced Russians that military power is the foundation of national greatness and international prestige, and that America and its NATO allies are an implacable enemy at Russia’s doorstep. As the euphoria over Crimea wears off, military parades and patriotic bumper stickers may not be enough satisfy Russians of their desire for national greatness, or assuage their exaggerated fears of external enemies. And yet, Putin’s Russia is a weakling, with a wobbly economy and a third-rate army. His only true source of power is his nuclear arsenal, which Putin and other officials have gotten into the frightening habit of brandishing in demonstrations of their bravado. In such circumstances, an already menacing and reckless Russia may become even more dangerous and unpredictable.

Most of the historical hallmarks of fascism are plainly obvious in Russia today. Just as in Nazi Germany and fascist Italy, there is omnipresent glorification of the Leader, there is a striking similarity in the iconographic portrayal of Hitler, Mussolini, and Putin as virile, muscular and omniscient strongmen. In all three, state media wage a nonstop propaganda campaign to convince the populace that they are a uniquely great people, who owe total and unquestioned allegiance to an all powerful state,but who are surrounded and threatened by historic enemies aided by unscrupulous traitors within. I am routinely harassed and even threatened with physical assault simply for being from America, the country Russians despise with venomous hatred. Just as in Nazi Germany and fascist Italy, repression and politically motivated murders are considered merely instruments of state policy. And control over the private economy is hijacked by the Leader for his own purposes of exerting control the commanding heights of the economy.

Russia today claims to celebrate a victory over fascism, but ironically is in fact is increasingly coming to resemble the Nazi state it helped defeat. Or perhaps not so ironically, Russia under the Soviets was overall as repressive and murderous as Nazi Germany, but was never defeated in war, and thus never underwent anything like de-Nazification. Many in the West mistakenly believed that Soviet quasi-fascism was an aberration, something imposed on an innocent people against their will. When I see the current frenzy of hatred, xenophobia, and exuberant pride in Russia’s aggressions against its neighbors, I can only conclude that there is a discernible line from Tsarist era pogroms against Jews to Stalinist concentration camps to today’s militarism and aggressions against its neighbors. We should and must be on guard against the danger of a fascist regime which is essentially weak but desperate to project a show of strength, armed with nuclear weapons, and led by a maniacal little tyrant followed by a mass of ignorant followers all too willing to swallow whole his vicious propaganda.