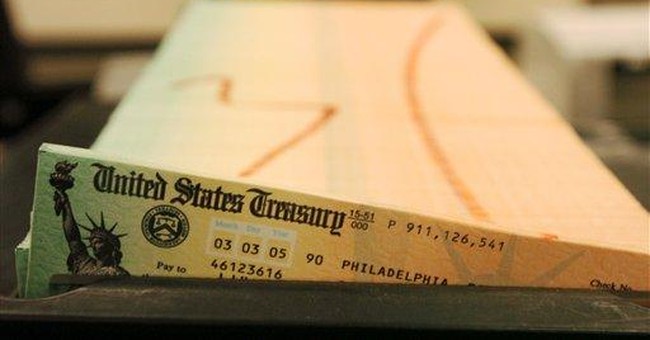 America's health care system certainly has its share of problems — of which most emanate from politicians' tinkering, tempting frustrated consumers with promises of better benefits at someone else's expense.

So the prospect of President Obama and Congress remaking American health care in their own image should scare the pants off anyone who looks not merely at the existing problems but at government's abysmal record as a problem-solver.

Since last November, Obama and Congress have operated in crisis mode. They hastily passed a stimulus bill that still hasn't stimulated — only to be subsequently embarrassed by provisions that no one, except select staffers and lobbyists, had actually read.

The President incessantly beats the drum for grandiose new programs in health care, "clean energy," and education, touting them as fundamental steps in a regimen of economic recovery and fiscal responsibility.

This, of course, is hogwash.

Even the Washington Post observed that "these pursuits have little to do with the economic crisis, and they are not the key to economic recovery."

Before overhauling what remains of a voluntary, market-based system of private-sector health care delivery, the President and Congress should focus instead on Medicare, the $462 billion-a-year boondoggle that is on course to devour the federal budget and ruin the U.S. economy.

President Obama argues that health care change is necessary because 46 million people don't have insurance. Setting aside the questionable validity of that statistic, compare it instead to the 45 million people currently enrolled in Medicare.

Today, Medicare consumes 13 percent of the federal budget and 3.2 percent of the national economy. (Medicare and SCHIP push total federal government health care spending to more than one-fifth of all federal outlays — more than spending on national defense.)

According to the annual Trustees' report, in 2008 the Medicare Trust Fund began paying out more in benefits than it was collecting in payroll taxes and interest. By 2017, the fund will be completely exhausted and staring at a $37.6 trillion — with a "T" — deficit over the next 75 years.

Of all the reckless, irresponsible promises made by Washington politicians and charged against our children and grandchildren's future, Medicare is the largest and most costly. In 20 years, its costs will surpass Social Security and are forecast to more than triple unless politicians muster the courage control spending or allow private competition to control costs.

The rush to "do something" to reform health care is doubly dangerous and counterproductive because the numbers used by the President don't add up — not remotely.

The President and his budget office vow that the as-yet-incomplete plan will be "deficit neutral." Why then has it been exempted from the new "pay as you go" spending rules? Congressional Budget Office estimates the cost of the Senate's Kennedy-Dodd health care bill at $1.6 trillion over 10 years. And that's just for the portions that have been unveiled.

Get this: despite the embarrassment of voting for a non-stimulative stimulus bill that they couldn't take time to read, Democrats are now amending a health care bill even before a complete version has been introduced — a process Sen. John McCain aptly labeled "a joke."

CBO's estimate does not include the cost for Obama's "public option," under which a government insurance program would compete with private plans. An independent analysis by the Lewin Group suggest that up to 119 million people currently insured by their employers could be shifted to a public plan.

So Obama claims he can create a new health care program nearly three times the size of Medicare and that he can do it for free? Compared to that, loaves and fishes are child's play.

Given that 67 percent of Americans still rate their own health care coverage as excellent or good and that the federal government's existing health care programs are budget-busters, President Obama should take some divine advice: "Physician, heal thyself."