Mark Davis
|
Posted: Jul 28, 2021 12:01 AM
Share   Tweet
The opinions expressed by columnists are their own and do not necessarily represent the views of Townhall.com. 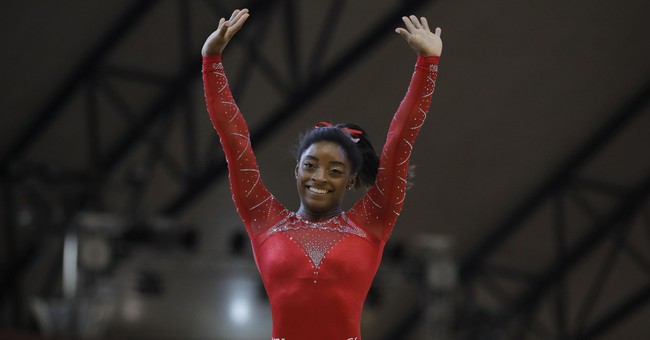 The following observations are not about Simone Biles as much as they are about us—our reactions, our eagerness for excuses, and our apparent shelving of what used to be not just an admiration but an expectation of toughness in the toughest of times.

24-year-old Simone Biles is the greatest gymnast the world has ever seen.  Her achievements have required not just consummate physical skill but unimaginable mental discipline.  The life of the elite gymnast is an other-worldly path of sacrifice during which sublime talent mixes with psychological demands that far exceed many other sports.  This makes her exceptional accomplishments even more praiseworthy.

For some reason, in one of the most important moments of her life and of our nation’s Tokyo Olympic hopes, her mental resilience checked out.  The U.S. Olympic team took a remarkable silver nonetheless, but we are left to wonder what happened, and to examine what the reactions say about our society.

The disappointment was convulsive, and it surely began with her.  She wanted, for herself and for her nation, the moment we all sensed was at hand—another stellar chapter in the history of American women’s gymnastics.  This one might have been uniquely historic as an unmatched athlete achieved even greater glory in her mid-twenties, a positively grizzled veteran by gymnast age standards.  This was going to be great for her, and for us.

Instead, we got her exit from the team competition, because she wasn’t in the right “head space.”

Let’s spend a moment on “head space,” and then a few more on the cascade of reactions, and more tellingly, the reactions to the reactions.

Athletes regularly say it is mental strength that allows the uppermost zeniths of performance.  Countless human bodies are capable of staying in good shape and practicing diligently—that’s a work ethic.  But to be Muhammad Ali, Tom Brady, Serena Williams, or others who have achieved unequaled greatness—that calls on the ethereal world of the mind.  These athletes find something undefinable that brings their talents to a level other mortals just can’t reach.

And the thing is, Simone Biles displayed precisely that quality for years. So what happened?

Apparently no one gets to ask, and we have learned quickly that only the approved reactions are acceptable.

If Brady had thrown three interceptions in the first half of the last Super Bowl, he would have faced numerous questions about such a massive performance hiccup.  Curiosity would have properly surrounded both his arm and his mental focus.  And there is no universe in which he would have handed the ball to the backup quarterback and opted out of the second half because he wasn’t in “the right head space.”

No comparison will be exact.  There is nothing precisely like the pressure on an individual gymnast in an Olympic team rotation.  Does it exceed any pressure on any athlete in any other setting?  I don’t know.  I do know that she has excelled under that pressure in the past, revealing a grit that has written her name on the tablet of our greatest Olympians.

Since no one knows why that well ran dry Tuesday, the air filled with speculation, all of it by definition underinformed.  I can’t know what it was like for her as she called on her characteristic inner strength and found it lacking.

But I do know this:  if Brady had thrown those three picks, he would have failed to do what was expected.  And I’m guessing Hell’s fury would not have awaited anyone saying so.

But in today’s pathologically sensitized environment, it is as if a requirement has been established for instant enthusiastic acceptance of the “head space” excuse.  Many offered that sympathetic reaction, including no shortage of condoling fellow athletes.

But am I the only person with a brain vault filled with gutsy performances on occasions when athletes had to show extra measures of determination, fighting through obstacles of various types?  And am I some insufferable monster for wondering why that was not Simone Biles on Tuesday night in Tokyo?

Mental health issues are a hot button these days, often for good reason. We have been dismissive of such challenges at times, and added awareness has made life easier for people facing those challenges, and has made us a more enlightened and kinder culture.

But the Simone Biles story does not contain years of some diagnosable condition that has left her occasionally unable to meet the grueling demands of her sport.  Quite the opposite. Her path of seven national all-around championships, five world all-around championships and six Olympic medals has been a rocket ride requiring incomparable athletic talent and indescribable mental toughness.

The gymnast’s path is blazed through childhood, puberty and adolescence. Along that path, these little girls show toughness many football linemen never achieve.  So no one should play the card that she might be somehow more prone to a mental stumble.

Nor am I buying the extenuations manufactured in the hours following her exit from the team.  Social media fairly gushed with hand-wringing about how hard it must be to perform without her family and others in her usual support structure nearby, and how jarring it must be to toil in the silent tomb of the COVID-emptied venue.

Know who else is dealing with that?  Every athlete from every sport from our country and every other country.  And somehow gold medals are being earned anyway.

So to conclude, I wish nothing but the best for Simone Biles, for the rest of these Olympics, for the rest of her remarkable life.  But I have wishes for our society as well.  I want it to be permissible to tell people to fight through tough moments, to dig down and find whatever is necessary to find the right “head space” to do what is required of a given moment.  Sometimes it will be in sports, sometimes in battle, sometimes in family life, sometimes in personal struggles.

If we do not value such toughness enough to call for it from each other, our collective and individual strengths will ebb.  We should maintain high expectations not so we can berate people when they are not met, but so we can inspire them to do better next time.  We don’t want countless young athletes across America to start cultivating “head space” justifications, and we surely don’t want this to become any more common in other walks of life.

Empathy is always a kind instinct, but we cannot allow it to devour what used to be a high value placed on doing whatever is necessary to fight through tough times and do what is expected.