Will The Reopening Of Hillary's Email Case Matter?

Mark Davis
|
Posted: Oct 31, 2016 12:01 AM
Share   Tweet
The opinions expressed by columnists are their own and do not necessarily represent the views of Townhall.com. 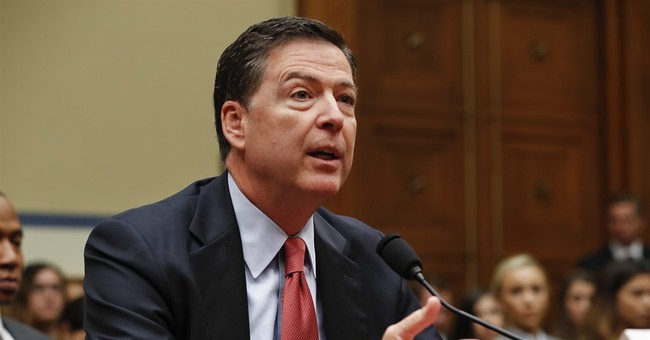 Make no mistake. I am enjoying the revival of FBI interest in Hillary Clinton’s email skullduggery as much as anyone eager to prevent her presidency. But as we move toward the final week of the election, I have to ask: how much is this really going to matter?

My hope is that it matters greatly. I hope a few million Hillary voters have reached the snapping point and simply cannot support her any longer. And if they have, please understand that many may have voted already. If we learn nothing else from this chapter, can we please recognize the insanity of early voting? She may actually win by a margin of votes cast for her already, because we have allowed ourselves to marinate in the absurdity that convenience and greater turnout are the most important thing in an election.

But to return to the matter at hand. FBI Director James Comey is on a political rotisserie spit, grilled by the left after weeks of torching by the flames of conservative indignation. But do not draw a false equivalency in those outcries. Clinton opponents were properly incensed when he detailed a strong case for indicting her in that infamous July statement, only to fail to recommend charges. Today, his re-opening of the case smacks of a decision to actually pay attention to facts and evidence.

Hillary supporters are on solid enough ground when they observe the curiosity of Comey’s revelation of a re-opened case without much of a shred of specificity as to why. Under normal circumstances, perhaps investigators would have perused the relevant messages sufficiently to reveal a detailed rationale for additional investigation.

But these are not normal circumstances. The FBI did not learn of these additional emails last week. The ticking clock grew louder, increasing the possibility of a bombshell revelation shaking loose as its subject was preparing to take the oath of office, or even after she had. That would not have been a positive development for an FBI whose director was already wounded by charges of corruption.

So Comey sprang forth faster than he otherwise might have, leaving us with a story that is damaging to the frontrunner and useful to the pursuer. But how much? How many votes actually move as a result of this October surprise?

Political damage should always be measured in terms of supporters driven away. Benghazi, for example, has never hurt Hillary Clinton in any appreciable manner, because only conservatives care about it. Few, if any, who hold those offenses against her had any intention of voting for her anyway. Similarly, most of the people who considered the Billy Bush tapes a nuclear bomb were Trump-haters already. The only way for a story to sink teeth into a candidate is if it changes voting behavior.

Poll numbers had been tightening in recent days because attention was peeling away from sideshows and gravitating toward actual issues suggestive of the differences between a Trump and Clinton administration. It has always been a foggy matter to assess how much Hillary Clinton’s stunning levels of corruption were actually damaging her. It certainly did not restrain her from rising to poll leads that made many conclude the race was all but over.

But it’s not. And now it’s really not. It will be mid-week before we have wide data on how much this new FBI probe has hurt her. It may not hurt that much at all. If Donald Trump wins this thing, it will be because he strung together a final-week push full of message discipline and sharply-defined policy differences. It will not be because James Comey rediscovered his duty to act based on what investigators find.

For the new email story to be a factor, it will have to pry a wedge into an already identifiable enthusiasm gap. Enthusiasm alone does not lead to the presidency; ask Bernie Sanders, or Ron Paul. But in a campaign between candidates with roughly equivalent voter appeal, a close race can be tipped if supporters on one side are on fire with motivation while the others are more tepid.

For evidence, return to the last election. 2012 was completely winnable for Mitt Romney, but due to some factors that were his fault and some that were not, millions of Republicans simply found him under-inspiring. Simultaneously, Barack Obama did not ride the wave of enthusiasm that lofted him in 2008, but there was enough left in that tank to fuel him past Romney for a second term.

Perhaps next Tuesday is the flip side of that coin. On paper, Hillary Clinton brings an impressive enough candidacy in terms of biography and fundraising. But a meager set of campaign skills and an underbelly of trust issues, even among Democrats, has kept her from closing the deal.

And perhaps the underestimated enthusiasm this time belongs to Trump. After a year of coverage of his massive rallies, it may seem odd to call his appeal underestimated, but it surely is, by all the smart kids in the enclaves of the elites. Those rallies mean nothing, they say; Hillary has a far better ground game, more money, more experience in the trenches.

All true. And maybe this year, irrelevant. In the model of the Brexit vote, there is surely a hidden sliver of Trump appeal, fashioned from voters who avoid pollsters and various other traditional channels of publicizing their preference. It is impossible to know whether that will amount to one or five percent from state to state, but even if it’s in the middle there somewhere, throw in the wet blanket effect of this new FBI story, and the result is his campaign prospects brightening while hers dim.

Enough to make the difference November 8? Predictions are as foolish eight days out as they were eight months out. But it may not be the smartest thing for the Clinton campaign to insult the FBI director they loved mere weeks ago. And as they call for these new emails to be released, they know full well how unlikely that is. Their ploy to give off one last whiff of transparency is colossally outweighed by their behavior from the beginning of this tawdry tale.

The air is thick with anticipation that the Clinton camp plans a November surprise to distract us from the October bomb that just detonated. But one wonders, even if they still have something up their tattered sleeve, if it will be as direct an indicator of what kind of presidency awaits.