The Absurdity of "Trump/Cruz Can't Win"

Mark Davis
|
Posted: Apr 22, 2016 12:01 AM
Share   Tweet
The opinions expressed by columnists are their own and do not necessarily represent the views of Townhall.com. 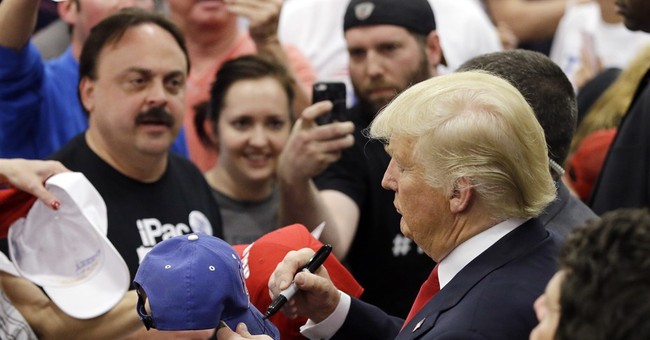 Have we not all learned that this is a terrible year for broad pronouncements? The past months are littered with the failed assertions of oh-so-smart people who just knew they had everything figured out.

Trump is a joke. No, wait, he’s inevitable. He’s out of control. No, now he’s more disciplined, He’s got this. No, he’s a loose cannon.

Cruz has no chance to be the nominee. No, wait, now he has the inside track. His campaign operation has too many flaws. No, now they are the smart ones with the best delegate roundup skills.

It’s the Year of the Governor. Nope, all the Governors are gone. Wait, there’s one. It’s John Kasich. He’s a terrible choice. No, wait, he’s great because he matches up well against Hillary. But he can’t win anything outside his own state and Manhattan.

It’s hard, especially for people in the analysis business. We are supposed to be able to read tea leaves and tell the world what to expect miles down the road. Now it’s a minefield just trying to suggest what might happen in the next few weeks. For the first time in the memories of most people, we have an election year with races not yet settled in the springtime. The usual drill is Iowa, New Hampshire, maybe another state or two, then the concrete sets and we wait six months for the predictable infomercials of the conventions.

You could say this year has been wildly different.

And yet, all through the shows I host and the others I listen to, and across the television landscape, the habit persists: people shooting off at the mouth as if they know what will happen in November.

Since there are many possibilities, any one of a number of these smarty-pants folks may wind up right. But that doesn’t mean there is cause for certainty right now.

The foremost cases in point: “Trump can’t win” and “Cruz can’t win.” These sad-sack defeatist themes are everywhere, and every Republican should know they are highly flawed.

Let’s first dismiss their use by the two campaigns in question. Donald Trump and Ted Cruz will obviously cast doubts on each other’s electability. That’s campaign piffle.

The truth of the matter is that there is a plausible path forward for either man to be sworn in as the 45th President of the United States. It is important to solidify this argument now because there will be mischief afoot this summer in the form of urgent calls for some third way, some brave knight to ride in to save us from the certain failure of our actual frontrunners against Hillary Clinton. John Kasich wants to be fill that role. Paul Ryan says he does not, but I’ll believe it when I don’t see it. There are even some noble and palatable names who did offer themselves up this year who might deserve a rethink. Okay, there’s one: Scott Walker.

But none of this is necessary. Trump can win. Cruz can win. Here’s how:

We begin with Trump because, well, everything begins with Trump. Are his negatives high? Sure they are, and there is nothing he can do about some of that. Some people just hate his guts, and the loudest of those seem to be Republicans terrified of having their comfort zones redrawn by a very different kind of nominee.

Most “Never Trump” tantrums will subside if he is the standard bearer. Maybe not among elites and pundits who may not recover from the vapors, but real voters will stare down the barrel of a Hillary presidency come October and get clarity in a hurry. The wild over criticism of him will subside, as will obsessions over some criticisms that may indeed hold water. The realization will dawn that even the brash, inconsistently conservative Trump presidency is infinitely preferable to the certain disaster that would accompany the election of Hillary Clinton.

Once his own party wises up and realizes this, his negatives will drop. They will drop further when they see him do something a Republican nominee has not done in a long while— go after a Democrat opponent with some energy and spine.

After watching John McCain and Mitt Romney’s soft touch against Barack Obama candidacies that swelled into the most harmful presidency in our history, this is the year for the GOP nominee to boldly identify the consequences of bringing about Obama’s third term. Does anyone doubt that Trump will do this?

Ted Cruz would as well, which is a good place to start the case for his electability. Hillary Clinton will dread debate nights with either man. My bet is she will agree to precisely one debate up against the hammer of Trump or the scalpel of Cruz.

Cruz is the embodiment of everything Republicans have sought since Reagan. His consistent conservatism has earned him scorn from Democrats, who know he is a genuine fighter, and from meek Republicans whose inadequacies are unveiled by his steadfastness.

His negatives are high as well. But it’s April. Can we remember that this is the rough and tumble primary season where Republicans in particular relish the circular firing squad? If Cruz carries the nomination out of Cleveland in July, the party will have finally offered up a candidate whom the faithful can vote for with no need to hold noses or make excuses.

The only serious Cruz concerns seem to involve those hard-to-define properties of likability, relatability and personal charm, found in abundance in candidates like Marco Rubio and Chris Christie (and Presidents like Reagan and Bill Clinton).

These are not irrelevant matters, but there is good news on that front. As someone who has known Cruz since his Texas Solicitor General Days, I can tell you he is an affable and good-humored man with connective qualities that will become more apparent when the post-convention smoke clears.

Most Americans have consumed Cruz in sharp doses— a sound bite of a contentious Senate speech, a brief segment on a cable channel— likely on the occasion of a lonely struggle against the Obama administration or a Republican party unwilling to thwart it. Given the time to offer up a positive vision for post-Obama America, Cruz will reveal the talents I have seen him deploy on numerous occasions— the gift of an inspiring and uplifting message that will explain better than most rivals why conservatism is good for rich and poor, young and old, men and women, Americans of all races. He will speak of opportunity and jobs and the rule of law and getting control of insane Washington spending.

And millions will eat it up.

How many millions? I wish I knew. I can’t guarantee a Cruz win any more than I can guarantee a Trump win. But the Cruz campaign will be so energizing to long-starved conservatives that many would crawl on shards of glass to make him President.

Hillary might beat either man. But either man might beat her. Yes, she will have that infernal let’s-make-history fuel in her tank. But the first woman president thing may lose some appeal after a few months of ads reminding America of her mountain of scandal and proven mishandling of national security matters. Add her complete lack of campaign skills and her inability to count on the raw enthusiasm that propelled Obama, and maybe the prospects look a little brighter. And amid all the wailing over whether Republicans will coalesce, it may be the Democrats who face the harder problem, with millions of Bernie Sanders voters who don’t give a flip about her.

And on that electoral college map that everyone says is so hostile to any Republican, remember that Mitt Romney lost vital Ohio by less than three points and vital Florida by less than one.

This November, either Trump or Cruz will be better than Romney, and Clinton will be weaker than Obama.

So everybody buck up. Enough Republicans bellyaching about how Trump or Cruz cannot win. We’re all caught up in the dramas of today, and more are on the horizon. But the time will come when all of the preliminaries are over and the battle for our nation’s future will be at hand, from the end of July to November 8. In the hands of Donald Trump or Ted Cruz, we will mount that battle with genuinely heavy artillery.