Gaza, Ukraine, Border Crises Have Roots In a Weakened America 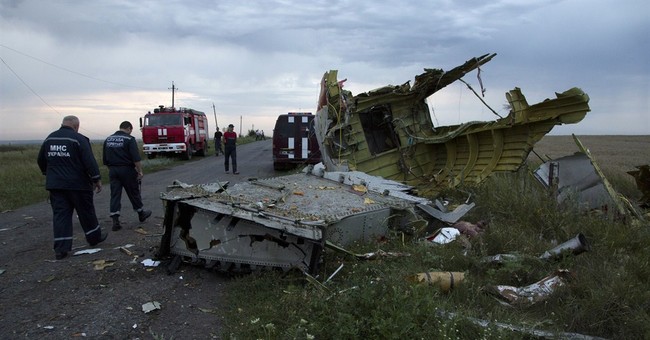 When this week began, it was hard to imagine a story knocking our collapsing borders from the front of our minds. But in the span of a few hours Thursday, two stories made us hit the pause button on the mounting and proper indignation over the organized (and often secret) government dumping of illegals in our midst.

That is still a huge problem, and the one with the most direct effect on the average American citizen. But when TV screens began streaming images of the Ukraine wreckage of yet another Malaysian plane, and then the Israeli operation in Gaza, the border took a back seat.

That won’t last long. Ukraine and Gaza pack deep global importance, but if the Obama White House continues to hose us over the causes of the illegal deluge and the reasons for the secrecy surrounding it, the border crisis will force its way back to the attention-span forefront.

So if the coming days are to be a whirlwind ride from Gaza to Donetsk to the Rio Grande, this seems like a fitting moment to evaluate how we have arrived at all three crises— and surprise, it is not as simple as a finger pointed at Barack Obama.

While his stewardship of America’s decline is a prime cause of Mideast turmoil, Russian adventurism and a porous southern border, all three nightmares have histories that weave back through Presidents and Congresses of both parties.

Let’s begin with the Israeli response to endless provocation from Hamas terrorists in Gaza. Watch this operation closely, for this is what it looks like when a strong leader takes bold action to protect his nation, a sight we have not seen and will not see as long as Obama is in the White House.

But even George W. Bush, who kept us safe with a war taken to the enemy after 9/11, supported a ridiculous “two-state solution” that hastens to grant Palestinians a nation well before they show any aptitude for non-terrorist self-governance.

The intervening years of bloodshed have been due in large part to America’s failure to remind the Palestinians that there are thousands of square miles they may inhabit in the vast lands surrounding the sliver that is Israel, and that if they do choose to remain in Israel, they will enjoy democracy and stability unthinkable in the Islamic neighbor nations.

Instead, we have pandered to terrorist leaders from Yasser Arafat forward, chiding Israel that it should show “restraint” while under constant attack, forwarding an obscene moral equivalency between our Israeli allies and the surrounding nations filled with enemies seeking its destruction.

There is no such nation as Palestine. Gaza is in Israel and while we’re at it, so is the West Bank. One cannot “occupy” one’s own nation. There is a thoroughly proper Palestinian homeland called Jordan, but if we simply have to carve out more, such prospects should not be breathed until the Palestinian leadership has displayed years— and I don’t mean one or two— of worthy behavior.

If this had been U.S. policy for the last five decades, Gaza would not have degenerated into the terrorist hornets’ nest it has become.

Similarly, there has been a price for our failure to treat Vladimir Putin as the murderous thug that he is. Americans always want enemy leaders to be less horrible than they are, so we concoct profiles of them that ignore the tough choices of speaking truth to evil. Modern Russia is not the Soviet Union, but Putin is no Thomas Jefferson.

The Obama years have been particularly energizing to his authoritarian instincts, steeling him with the knowledge that he could pluck Crimea like a grape and we would do nothing. He has not yet tested us by bringing Ukraine back into the Russian fold, but it looks like his bloody henchmen have downed another aircraft in their zeal to punish Ukraine for daring to cleave to liberty.

The United States should make clear that we are going to arm the Ukrainians to the teeth while training their forces. There is no limit to the blood Putin will attempt to draw in thirty additional months of an Obama presidency that may talk tough on occasion but shows little to suggest any real resolve behind the rhetoric.

To return to our own country, Obama joins a list of Presidents stretching back to Reagan and arguably farther, who underdelivered on the necessity of a border that does what borders are supposed to do.

Reagan showed much of the strength we have needed to help stave off these dark turns, but even he was too trusting in the immigration deals of the mid-1980s, that led to the first millions of modern-era illegal immigrants.

For thirty years, the left has equated strong borders with xenophobia and outright racism, and gutless Republicans have cowered obediently. Paralyzed by the erroneous belief that standing up for our immigration laws will bleed millions of Hispanic votes, weak Republicans are as guilty as any Democrat for delivering us to 2014, where an open-borders President paves a yellow brick road from the hills of Central America to the interiors of our strapped cities.

He does it to enlarge the underclass and culture of dependency which are his party’s oxygen. If this were merely bad policy, that would be bad enough. The lying makes it an outrage for the ages.

First came the lie that these suffering thousands were escaping violence. Some may be, but most tell detaining officials that they heard far and wide that the borders are down, and Obama is offering the American Dream to lawbreakers who are, or who bring with them, minors.

Another lie came this week when the White House was asked why so many illegals seemed destined for U.S. cities with no advance notice to local officials. The answer came back: privacy.

For people who are completely unidentified and in many cases, unidentifiable, whose names and images would be disseminated precisely nowhere? Privacy? Hoping for better policies is a distant fantasy when first we must muddle through such a thick jungle of deceit.

So here we are. Get ready for days of images to test the American heart. Israel will be condemned for protecting itself, Putin will get away with more murders, and Americans standing up against an incursion of illegal aliens will be branded as bigots.

That will be disturbing enough. But the sadder fact is how preventable all of this has been.